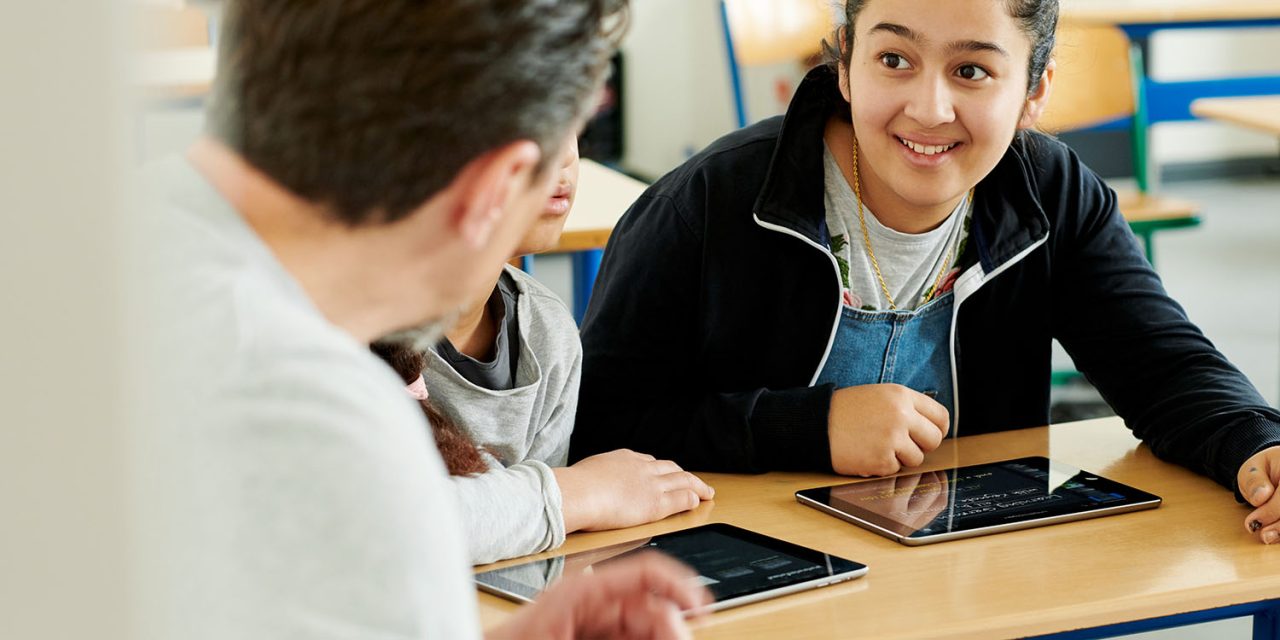 Apple has drawn attention to an inspiring example of iPads helping refugee children, some of whom have never before set foot in a school.

In one school, there are 325 students who come from 39 different countries, many of whom have fled war in the Middle East. iPads play a key role in helping the kids overcome a fear of looking foolish in the classroom …

Apple describes the school in Dusseldorf, Germany, where German is a second language for 20% of the students. Every student has their own iPad, and instead of the pressure of raising their hand and answering a question out loud in front of other students, they can do it on their iPad and have that let them know whether they were right or wrong.

For teachers Nick Kyriakidis and Sinaan El Haq Hadjeri, who alternate teaching the class on different days, one of the most powerful tools they have to bridge that language divide is iPad.

“Kids withdraw when they’re afraid of [making] mistakes,” says Kyriakidis. “If we try to reduce this fear, it’s much easier for them to work with us because they don’t have anything to lose.”

“With iPad … it’s different than when they write something [on paper] and I come in with my red pen and say ‘that’s wrong,’” says Hadjeri. “[With iPad] they learn for themselves.”

Since adopting the program, 100% of students have graduated, up from just 80% beforehand.

Apple highlights two students from Aleppo in Syria, a city devastated by the civil war in which civilians were routinely targeted, with repeated shelling of residential areas – and deliberate targeting of schools and hospitals. Large areas of the city were completely destroyed, leaving people homeless and in daily fear for their lives, hence fleeing to other countries.

Medina Ibrahim, 13, and her brother Mohammed, 16, […] came to Germany with their parents and two younger siblings. Their journey from Aleppo, Syria, took them through Turkey before the family settled in Dusseldorf.

Medina says that when they arrived they were very lonely because they couldn’t speak a word of German and had trouble making friends.

Over the course of the last year, Medina, her brother and the other students in this class have worked with their iPads daily, including using a number of lessons that Kyriakidis created with Keynote. Today, Medina assembles a sentence into the correct word order, and uses Voice Record to say it in German into her iPad. It gives her and the other students the opportunity to sound out foreign words by themselves, without fear of embarrassment, and to work at their own pace.

It’s no coincidence that Kyriakidis and Hadjeri understand the needs of these students: both originally arrived in Germany as children from other countries, unable to speak the language. They say they wish this kind of technology had been available then.

The biological father of Steve Jobs was himself a Syrian refugee. When opposing Trump’s immigration plan, Apple CEO Tim Cook made indirect reference to this when he said that ‘Apple would not exist without immigration.’

iPads helping refugee children is just one example of the valuable role they can play in assisting tuition for non-native language speakers.

At College Daniel Argote in Pau, France, students are sent home with a video lesson recorded by their teacher on their iPad, and the next day work through their “homework” in class. This way, students whose parents aren’t fluent in French are able to extend their learning both inside and outside the classroom.

At Stenkulaskolan School in Malmo, Sweden, where 98 percent of students speak Swedish as a second language, teachers have seen an 80 percent jump in math grades since they started sending home similar instructional videos, recorded by a teacher in Swedish.

And at St. Cyres School in Penarth, Wales, the 2018 senior class of English as an Additional Language students working with iPad increased their grades by an average of 3.8 points during the year — outperforming their peers who speak English or Welsh as their native language for the third year in a row.