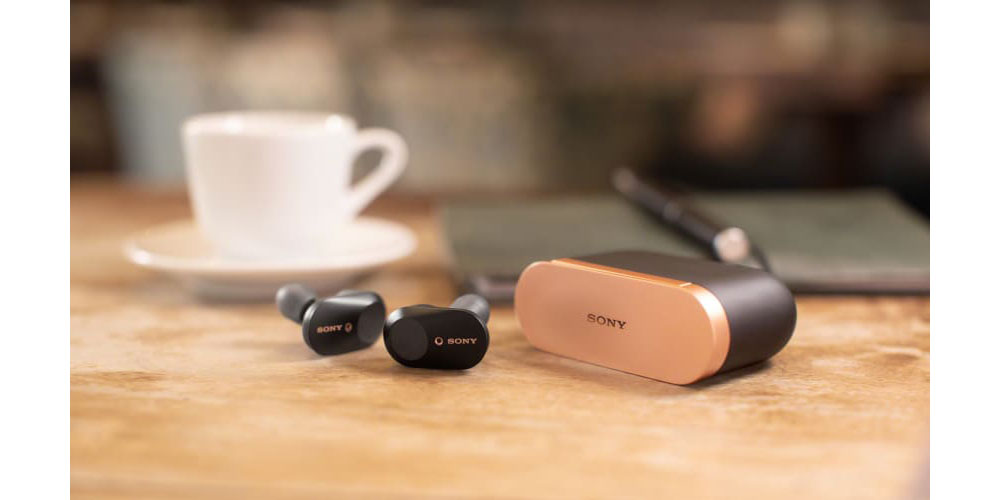 Sony had earlier established its noise-canceling tech as at least the rival of Bose, with some considering it superior – so bringing that same feature to the true wireless in-ear market could prove interesting competition for Apple’s AirPods …

Sony has managed to combine both types of active noise cancellation into the compact form-factor.

The WF-1000XM3 headphones feature Dual Noise Sensor technology that works with the new HD Noise Cancelling Processor QN1e to catch and cancel noise respectively, so that all attention is on your music. Thanks to Dual Noise Sensor Technology, one feed-forward microphone and one feed-back microphone on the surface of the headphones catch more of the ambient sound around you. Having caught the ambient sound, the dedicated HD Noise Cancelling Processor QN1e gets to work. The processor cleverly creates an inverted sound wave to offset bothersome background noise. It not only cancels more noise across almost all frequencies but also uses less power. Anything ranging from annoying aircraft cabin noise, to hustle and bustle on the city streets, is dramatically cancelled by the buds – so it’s all about the music.

Feed-back NC means that the headphones capture the ambient sound and cancel that, while feed-forward means a second mic inside the headphones aim to cancel out any ambient sound that makes it into the ear. It’s the combination of the two technologies which has enabled Sony to develop its Bose-beating reputation.

The WF-1000XM3 support 24-bit audio files and parallel transmission to each earphone, rather than one receiving the signal from the phone and then relaying it to the other.

Sony says that its noise-canceling processor is extremely power-efficient, and backs this with a claimed 6-hour battery life with noise-canceling on. The case provides a further 18 hours of power, for 24 hours in total (or 32 hours without using noise-cancellation).

The Sony WF-1000XM3 also have a handy ‘flight attendant’ mode.

For ease, you can use Quick Attention mode to communicate without removing your earbuds. Simply place your finger over the touch panel of the left earbud to quickly lower the music volume and let the ambient sound in, so you can hear announcements or order a drink. Plus, with the fully customisable touch sensors on the earbuds, you can easily play, pause, skip songs or activate your voice assistant with simple taps. Additionally, the new Wearing Detection feature automatically pauses your music when you remove one of the earbuds from your ear and resumes playing when you put the earbud back in your ear, so you never miss a beat.

More details can be found here. The promo video can be seen below, and we’ll be aiming to bring you a review when available.