Apple ads from the 1970s to present day available(ish) online 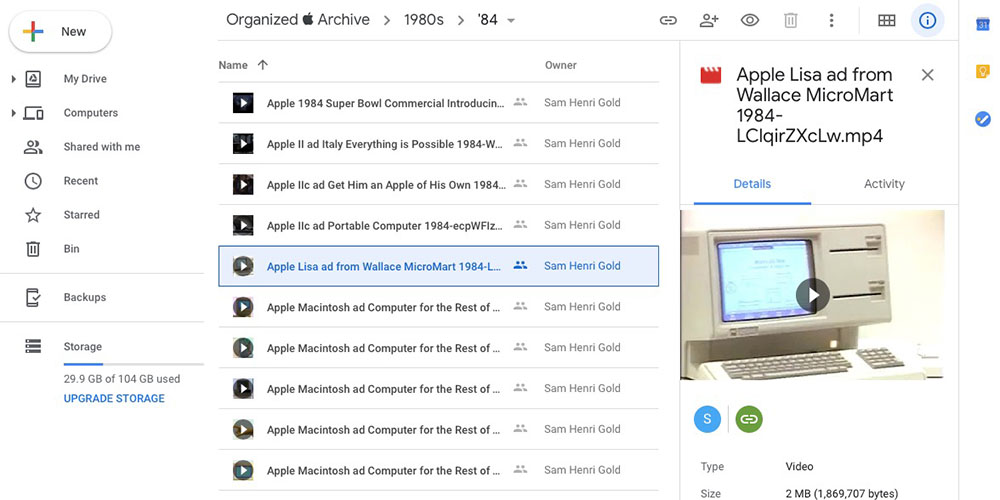 Apple ads from the 1970s to the present day have been archived by graphic designer and marketer Sam Henri Gold.

The archive includes literally hundreds of TV ads, print ads, promo photos, and more, organized by decade and then year …

Gold says that he plans to get everything hosted on the Internet Archive later this year, but for now he has uploaded it to Google Drive so that people can check that everything is in the correct year.

I’ve decided to open up my Apple video archive via Google Drive as a sorta test flight to make sure all the dates are accurate and to ensure I haven’t missed anything, check it out and enjoy! Feedback encouraged :)

He says that he began the Apple ads archive after the Every Apple Video YouTube channel stopped updating.

I began the archive after the Every Apple Video Youtube channel went down in March(?) 2017, been updating it since. I’ve been sourcing from YouTube (both Apple’s own and other small personal channels ppl uploaded Apple vids to) as well as FTP servers and clips internet friends donated. I’m always looking for more donations!

Jason Scott responded to Gold’s tweet by saying that the Internet Archive would be happy to host.

Unfortunately, Google Drive – like other cloud services designed primarily for personal access — has low limits for both online viewing and downloading of the videos, so many Apple ads are already unavailable.

The Internet Archive started out as an archive of web content through the Wayback Machine. This lets you type in any URL and see archived versions of the website from different dates, with more than 20 years of history available for some sites. It has since expanded into a broader mission.

The Internet Archive, a 501(c)(3) non-profit, is building a digital library of Internet sites and other cultural artifacts in digital form. Like a paper library, we provide free access to researchers, historians, scholars, the print disabled, and the general public. Our mission is to provide Universal Access to All Knowledge.

We began in 1996 by archiving the Internet itself, a medium that was just beginning to grow in use. Like newspapers, the content published on the web was ephemeral – but unlike newspapers, no one was saving it. Today we have 20+ years of web history accessible through the Wayback Machine and we work with 625+ library and other partners through our Archive-It program to identify important web pages.

As our web archive grew, so did our commitment to providing digital versions of other published works. Today our archive contains:

While Apple does issue take-down notices for some recent content – like supercuts of its keynotes — the company seems to have a relaxed attitude toward older videos. Although the Every Apple Video YouTube channel did go offline for a time in 2017, before reappearing with videos up to 2015, it remains available. Hopefully the same will be true of the older materials here once they hit the Internet Archive.