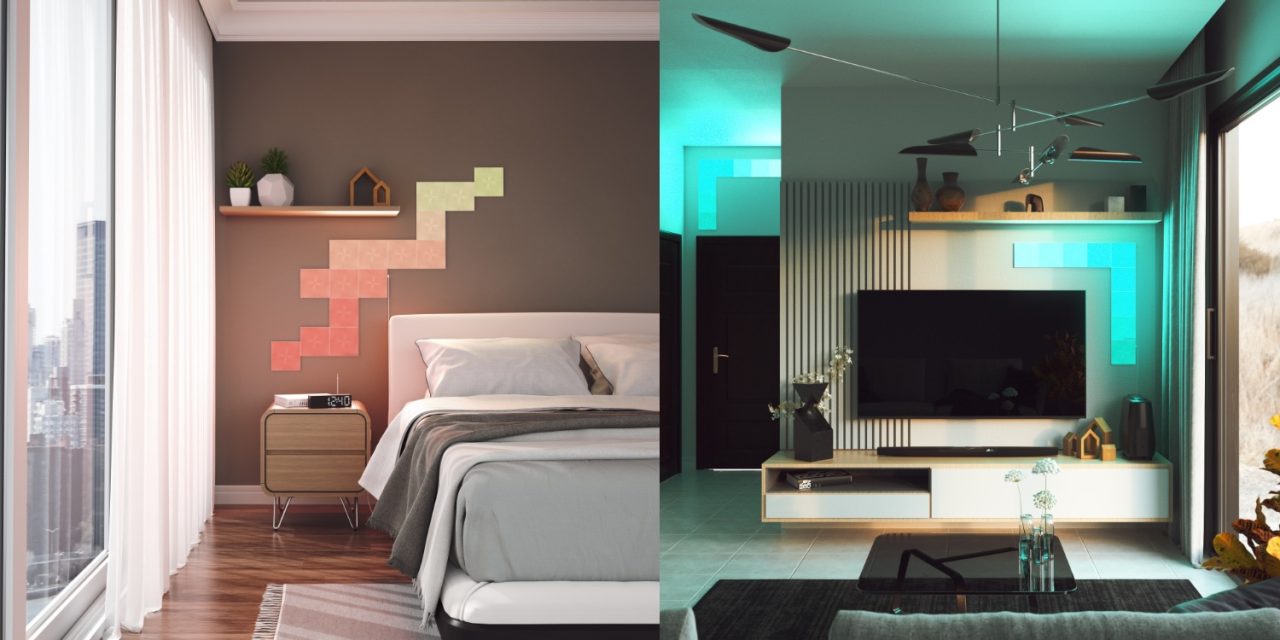 Nanoleaf has a new update launching today for its Canvas smart lights that transforms the color-shifting tiles into touch-based HomeKit buttons for activating scenes. Touch Actions let you assign HomeKit scenes to specific Canvas tiles for controlling groups of smart home accessories without an app or voice.

That convenience is important in situations where voice isn’t appropriate (like when people are sleeping) and using an app is too fiddly. Using Touch Actions, Nanoleaf puts a HomeKit button for assigning up to three scenes per each tile directly on the wall. Canvas smart lights are square, touch-based accent lights that can also be controlled through HomeKit and Siri.

The new Touch Actions feature requires a HomeKit hub on the network (i.e. an Apple TV, always-on iPad, or HomePod) to run scenes. Using today’s update, Canvas can appear as a HomeKit button in the Home app for configuration. Nanoleaf also offers a hardware control that functions as a HomeKit button.

Nanoleaf Introduces ‘Touch Actions,’ Providing Complete Smart Home Control at the Touch of a Button, Without Taking Out Your Phone

TORONTO –  August 1, 2019 –  Smart lighting pioneer Nanoleaf has launched Touch Actions, an upgrade to the Canvas Smarter Kit that allows for the control of all HomeKit devices simply by touching one of the light squares. The Nanoleaf Canvas Smarter Kit is a smart, modular lighting system made up of LED light squares that syncs to music in real time. With the new Touch Actions feature, any light square on a Canvas layout can be turned into a touch-reactive “smart button” that can be used to control all HomeKit products without the use of a phone.

Gimmy Chu, Nanoleaf CEO, said “Technology works best when it fits seamlessly into the routines of our daily lives. Touch Actions eliminates the extra steps of taking out your phone, unlocking, swiping, and tapping into the phone’s app. Now, Nanoleaf users can create magical experiences across all of their HomeKit devices whether they’re entertaining guests, relaxing at home, or hanging out with friends simply by tapping a Canvas square in their layout.”

With three touch options to choose from – single press, double press , and long press – Nanoleaf’s Touch Actions take wireless control to a new level of freedom as each Canvas square can be customized for a different occasion, activity, or time of day.

For example, users can program one square for their “Good Morning” Scene. Simply press the assigned square to get ready in the morning, turning on your Canvas to a bright morning Scene, switch on the bedroom fan and even turn on the kettle (via smart plug) to start boiling water for tea – all at once. The tap of another square might turn off all the lights and turn down the thermostat to save energy while you’re out of the house. Users get to decide which square does exactly what and with HomeKit-enabled smart plugs, non-connected devices can also be included in smart home controls.

Nanoleaf was built on the mission of changing the way we think about lighting. Its modular lights have colored countless homes and offices, creating more vibrant spaces for living, playing, and working. Touch Actions takes this mission a step further, making smart home commands more seamless and accessible than ever before.

Touch Actions is available for iOS devices and requires a connection to a Home Hub device, including the Apple TV, iPad or HomePod. Requires version 1.4.0+ on Nanoleaf Canvas and Nanoleaf iOS App 3.4.0+. To experience Touch Actions, simply set up in the Nanoleaf App and Home App.