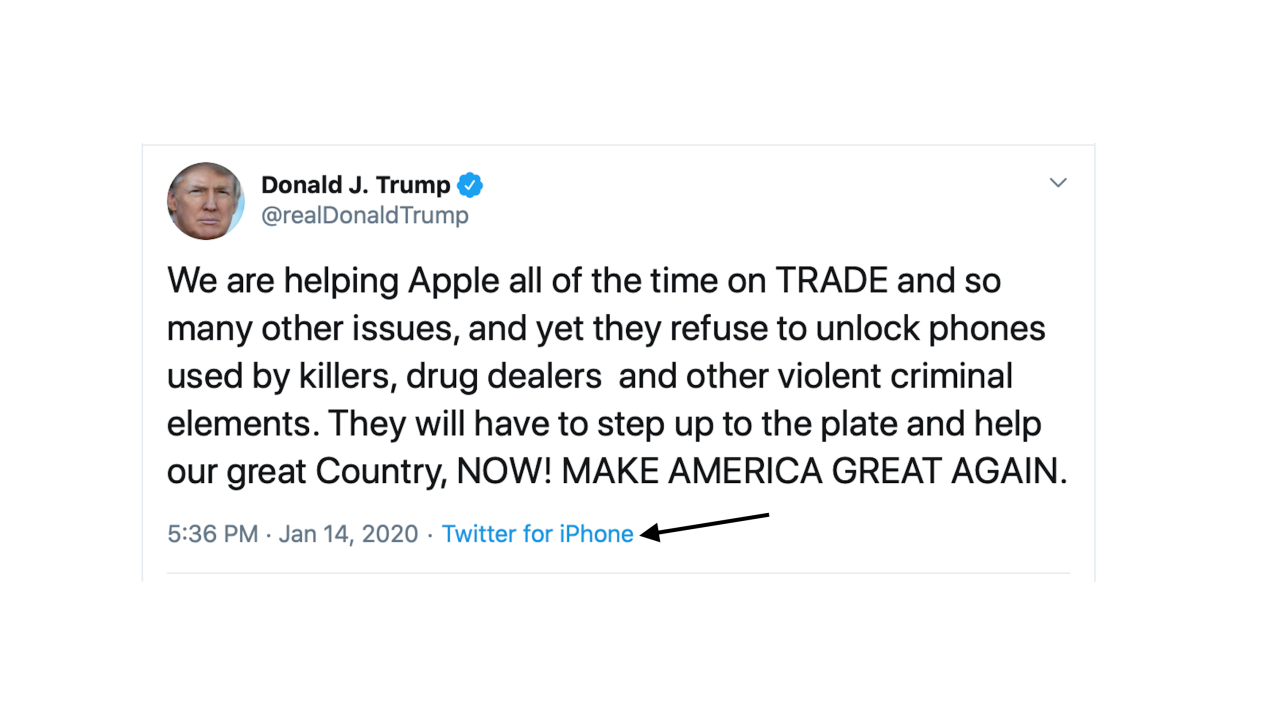 President Trump has joined the fray around the FBI’s request for Apple to help unlock two iPhones used by the gunman responsible for last month’s shooting at the Pensacola Naval Air Station. Trump took to Twitter (via his iPhone) this evening to call on Apple to unlock the phones in question.

In the tweet, Trump emphasized that the government is “helping Apple all of the time on trade and so many other issues.” Despite this, Apple refuses to break encryption for iPhones used “by killers, drug dealers and other violent criminal elements,” Trump says. The full statement:

As we detailed this morning, however, the FBI is asking Apple to break encryption for iPhone models that third-party companies can already unlock. The two iPhones in question are an iPhone 5 and an iPhone 7, both of which are so old that their security has already been compromised.

There are multiple security firms that are able to access the data on these iPhones, but the FBI, AG Barr, and Trump are all calling on Apple to do it instead. In actuality, the FBI could likely use the same exploit now that it did to unlock the San Bernardino iPhone.

Another thing to remember is that Apple does help the FBI to the fullest extent possible. In a statement yesterday, Apple said that it has so far provided “gigabytes of information” to the FBI, responding to its requests for data “often within hours.” The company also yet again said that it will not create a backdoor in iOS, even if it’s only for the “good guys.”

In a new report this evening, the New York Times says that Apple is internally working to guide this situation towards the third-party security firms:

Mr. Cook’s small team at Apple is now aiming to steer the current situation toward an outside resolution that doesn’t involve the company breaking its own security, even as it prepares for a potential legal battle over the issue, said the people with knowledge of the thinking.

People at Apple working with the FBI are said be be frustrated that the FBI hasn’t yet reached out to those third-party firms.

In 2016, Trump called for a boycott of Apple until the company agreed to unlock the iPhone used by the San Bernardino gunman. That tweet, too, was sent from his iPhone.

Apple CEO Tim Cook has a friendly relationship with Trump, but the two have sparred publicly on multiple different issues. In 2018, Cook spoke out against border separations and has routinely expressed support for immigrants and the DACA policy. A WSJ report last year explored the “unlikely” relationship between the two, explaining that the Trump Administration has even come to rely on Cook for advice on business and trade deals.