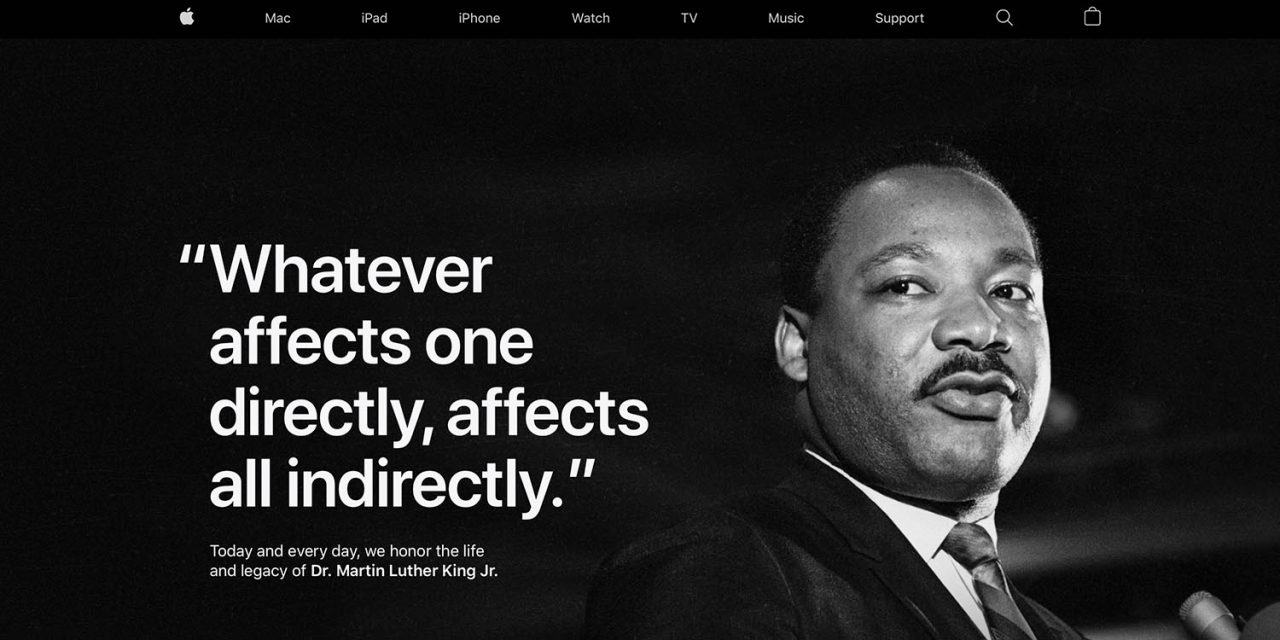 In what is now an annual tradition, Apple has dedicated its homepage at apple.com to celebrating Martin Luther King Jr Day.

Each year, Apple chooses a one-sentence quote, which this year is:

Whatever affects one directly, affects all indirectly.

It is again taken from King’s famous Letter from a Birmingham Jail in which he addressed criticism from other Christians who considered he was an outsider interfering in matters which didn’t affect him – and breaking the law to do so.

I am in Birmingham because injustice is here […] I am cognizant of the interrelatedness of all communities and states. I cannot sit idly by in Atlanta and not be concerned about what happens in Birmingham. Injustice anywhere is a threat to justice everywhere. We are caught in an inescapable network of mutuality, tied in a single garment of destiny. Whatever affects one directly, affects all indirectly. Never again can we afford to live with the narrow, provincial “outside agitator” idea. Anyone who lives inside the United States can never be considered an outsider anywhere within its bounds.

He went on to observe that legality or illegality is not necessarily the same as right or wrong.

We should never forget that everything Adolf Hitler did in Germany was “legal” and everything the Hungarian freedom fighters did in Hungary was “illegal.”

"I have the audacity to believe that peoples everywhere can have three meals a day for their bodies, education and culture for their minds, and dignity, equality and freedom for their spirits.” Let us all be so audacious, and work to make MLK’s dream a reality for us all.

In that speech, King said that we must favor hope and faith over despair.

You can watch the full speech below.

Martin Luther King Jr Day is a federal holiday in the U.S. to mark the birthday of the civil rights leader. The holiday was signed into law in 1983 and first observed in 1986, but opposition in some states meant that it wasn’t until the year 2000 that it was officially observed across the entire country.