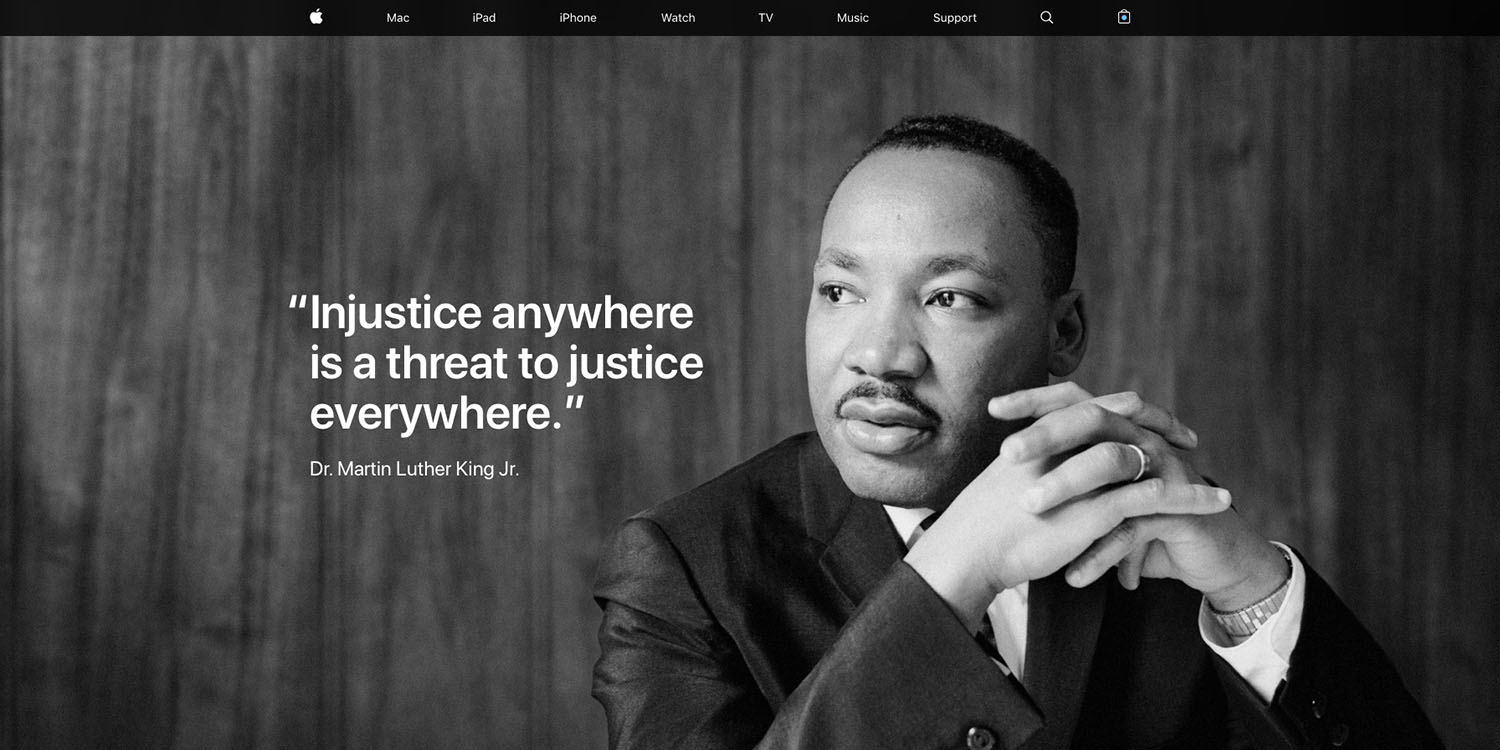 As it did last year, Apple is celebrating Martin Luther King Jr. Day by using its homepage to display a full-page photo and another equally timely quote.

Injustice anywhere is a threat to justice everywhere.

I am cognizant of the interrelatedness of all communities and states. I cannot sit idly by in Atlanta and not be concerned about what happens in Birmingham. Injustice anywhere is a threat to justice everywhere. We are caught in an inescapable network of mutuality, tied in a single garment of destiny. Whatever affects one directly, affects all indirectly. Never again can we afford to live with the narrow, provincial “outside agitator” idea. Anyone who lives inside the United States can never be considered an outsider anywhere within its bounds.

On #MLKDay, let us remember our own duty to do good. As King said: “In this unfolding conundrum of life and history, there is such a thing as being too late. This is no time for apathy or complacency. This is a time for vigorous and positive action.” pic.twitter.com/G2SSY5UfEV

Last year, the quote Apple chose was from a commencement address King gave for Oberlin College in 1965.

The time is always right to do what is right.

In it, King argued that the greatest danger may be not in the evil actions of the few, but rather the apathy of the many.

It may well be that we will have to repent in this generation, not merely for the vitriolic works and violent actions of the bad people who bomb a church in Birmingham, Alabama, or shoot down a civil rights worker in Selma, but for the appalling silence and indifference of the good people who sit around and say, “Wait on time.” Somewhere we must come to see that human progress never rolls in on wheels of inevitability. It comes through the tireless efforts and the persistent work of dedicated individuals. Without this hard work, time becomes an ally of the primitive forces of social stagnation. So we must help time and realize that the time is always right to do right.

Apple is also highlighting ‘MLK: In His Own Words’ on the App Store.

Finally, Apple suggests four apps that can help people honor MLK by getting involved in their local community, a couple of which require explanation:

Martin Luther King Jr. Day is a federal holiday in the U.S. which marks the birthday of the civil rights leader. King, who advocated non-violent opposition to racial discrimination, is best known for his ‘I Have a Dream’ speech which has gone down in history as one of the most inspiring and impactful speeches of all time.

The holiday was signed into law in 1983 and first observed in 1986, but opposition in some states meant that it was only officially observed across the country from 2000.