Review: Denon Home 150 is a $249 fledgling HomePod competitor with pros and cons 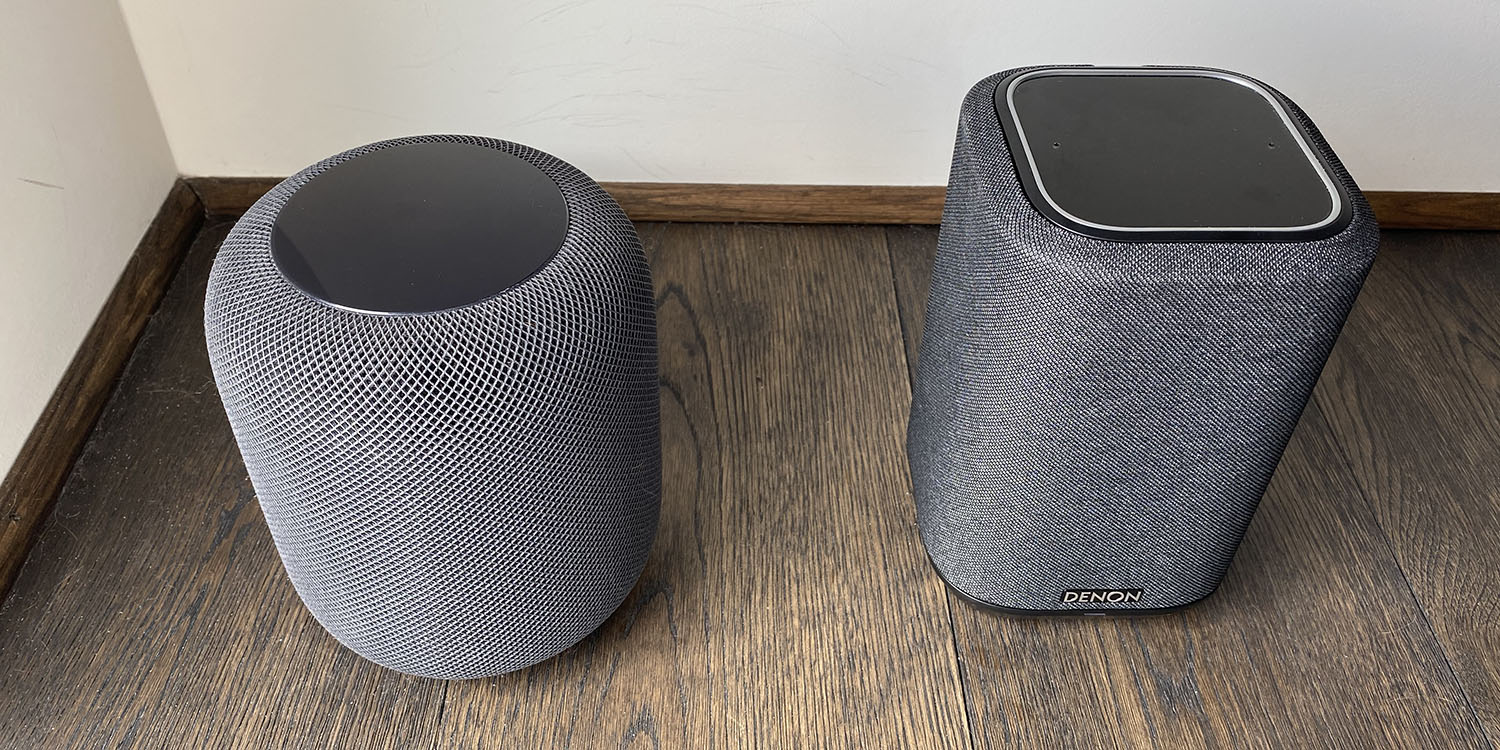 The Denon Home 150 is the latest speaker aiming to compete with Apple’s HomePod.

Denon has an impressive track-record in audio products, dating back to gramophone players in 1910, and created its own range of multi-room speakers back in 2014. At the time, it decided to create a sub-brand for those: HEOS. With its latest Home models, however, it has returned to Denon branding …

The Home 150 is a very similar size to the HomePod. It’s a square format rather than round, slightly smaller diameter, and a little taller. It has the same fabric outer, though with a much finer mesh, and a touch-sensitive panel on the top.

It’s also available in the same choice of dark grey and white colors as Apple’s speaker.

The Home 150 has a Denon logo on the front and a blue LED. One nice touch about this: you can adjust the brightness of the LED – or switch it off altogether – in the companion app.

Overall, looks-wise there isn’t a great deal to choose between this and the HomePod unless you have a strong preference for square versus round. Incidentally, if the looks bring to mind the Sonos One, there is no competition here: the Denon is in another league when it comes to sound, as you might expect for something costing $100 more.

The HomePod has the Siri color animated graphic and white +/– volume buttons. The buttons illuminate when you touch the surface.

The Denon touch panel lacks the color of the HomePod, but is higher-tech in one-respect: a proximity-sensor automatically illuminates the controls as your hand approaches it. This is a really neat feature I’d love to see on the HomePod.

The Denon also offers more controls. In addition to volume buttons, and play/pause, there are three preset buttons you can assign to Internet radio stations. 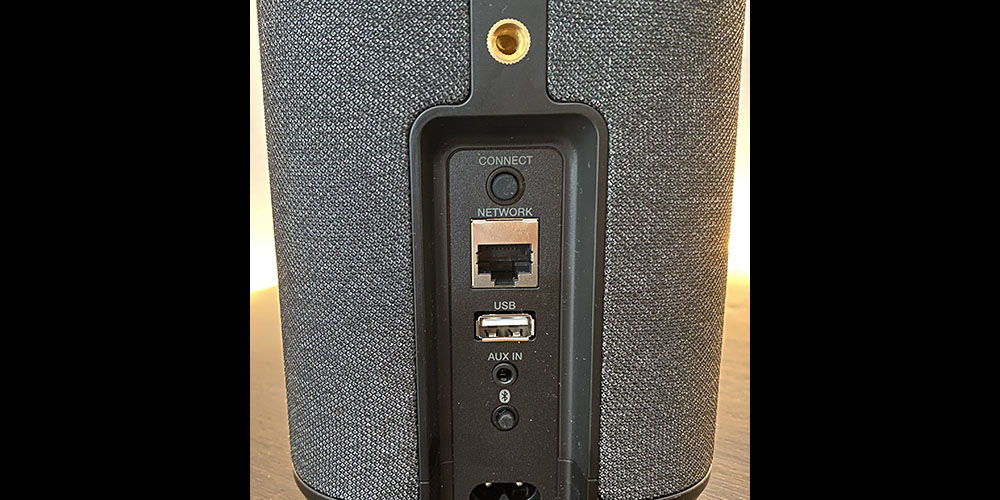 One area where Denon has a huge advantage over HomePod is in your choice of inputs. The HomePod has two music sources: built-in Siri access to Apple Music, and AirPlay 2.

The Denon Home 150, in contrast, offers AirPlay 2, Bluetooth, USB, 3.5mm aux, and Ethernet. The USB socket also supports playing music stored on a USB key. If you want to use it for lossless audio, it supports WAV, FLAC, and ALAC up to 24-bit 192kHz.

There is also built-in support for Spotify, Amazon Music, Deezer, Napster, SoundCloud, Tidal, TuneIn, and Mood Mix. You’ll note that Apple Music isn’t on the list, and that’s because, for now, you can only play it via an Apple device.

I say in the headline that this is a ‘fledgling’ HomePod competitor, and that’s because it doesn’t natively support Siri – not yet, at least.

Denon does list it in the marketing materials, but that’s slightly misleading. Because the speaker is an AirPlay 2 device, you can use Siri to tell your iPhone what to play on it.

For example, I named the Home 150 as Kitchen, so I can tell my iPhone “Play Dua Lipa in the kitchen” and it will do so. What you can’t do is use Siri on the speaker directly.

Denon is being rather cagey about its plans here. All it will say publicly is that a firmware update will enable ‘a voice assistant’ later this year. Reading between the lines of some things I’ve been told, my expectation is that this will include support for Siri. However, if this is an important feature to you, please don’t buy the Home 150 on this basis; you’d be better to wait and see.

The HomePod has one 4-inch woofer and seven tweeters; the Home 150 has inferior-sounding specs here, with a 3.5-inch woofer and single 1-inch tweeter, alongside a Class D amp. However, the main difference here is that the HomePod is aiming for omni-directional sound, while the Denon is designed to face the listener. Provided you’re able to position the speaker appropriately, there’s no notable difference in the tweeter performance.

A big selling point of the HomePod is an extremely wide sound-stage: where the music appears to be coming from a much bigger source than a single speaker. The Denon speaker actually manages this impressively well, but not as well as the HomePod.

Despite the slightly smaller woofer on the Denon, it actually has a significantly punchier bass than the HomePod. Indeed, for my tastes, the bass is a little too heavy: I used the HEOS app EQ setting to drop it one notch.

The Denon also wins on volume, big time. More on this in a moment.

As with HomePod, the Home 150 is a mono speaker, but you can create a stereo pair with two of them: this is set up in the HEOS app.

If you’re an Apple Music subscriber, I would say the Denon Home 150 isn’t for you – at least, not yet. To my mind, built-in Siri support is a massive benefit of the HomePod, and while the Denon might get that ability in an upcoming firmware update, we don’t know this for sure.

If you use Spotify, however, then native support for the streaming music service is an equal draw. It appears immediately in the Spotify app as a speaker, rather than having to go through the annoying ‘More Devices’ step needed to play on HomePods.

In terms of sound, the Denon has two main advantages over the HomePod. First, volume. The maximum volume is much louder than the HomePod – and it achieves this without distortion.

Second, configurability. The HomePod does have well-hidden EQ controls. While playing, you can go into the Settings app then Music, scroll down to Playback and select EQ. However, all you can do here is choose from one of Apple’s presets. These include boost and reduce options for both treble and bass, but you just get Apple’s chosen options for these. The HEOS app, in contrast, allows you to boost or reduce both bass and treble in five-stop increments in each direction.

Conversely, the HomePod wins when it comes to sound stage and omni-directional listening. The former difference isn’t anything like as large as you’d expect it to be, and the latter isn’t vastly relevant to most setups, but the automatic room compensation for HomePod is impressive if you need to place them close to a wall.

Finally, inputs. If you want anything other than built-in Siri or AirPlay 2, the Denon is the only option.

All this is a lengthy way of saying this isn’t an easy choice. It depends on your needs and preferences. The most likely customer for the Denon Home 150 is a Spotify subscriber looking for as much volume as possible and full EQ control, while someone who wants a compact speaker for wired connectivity is a secondary market.