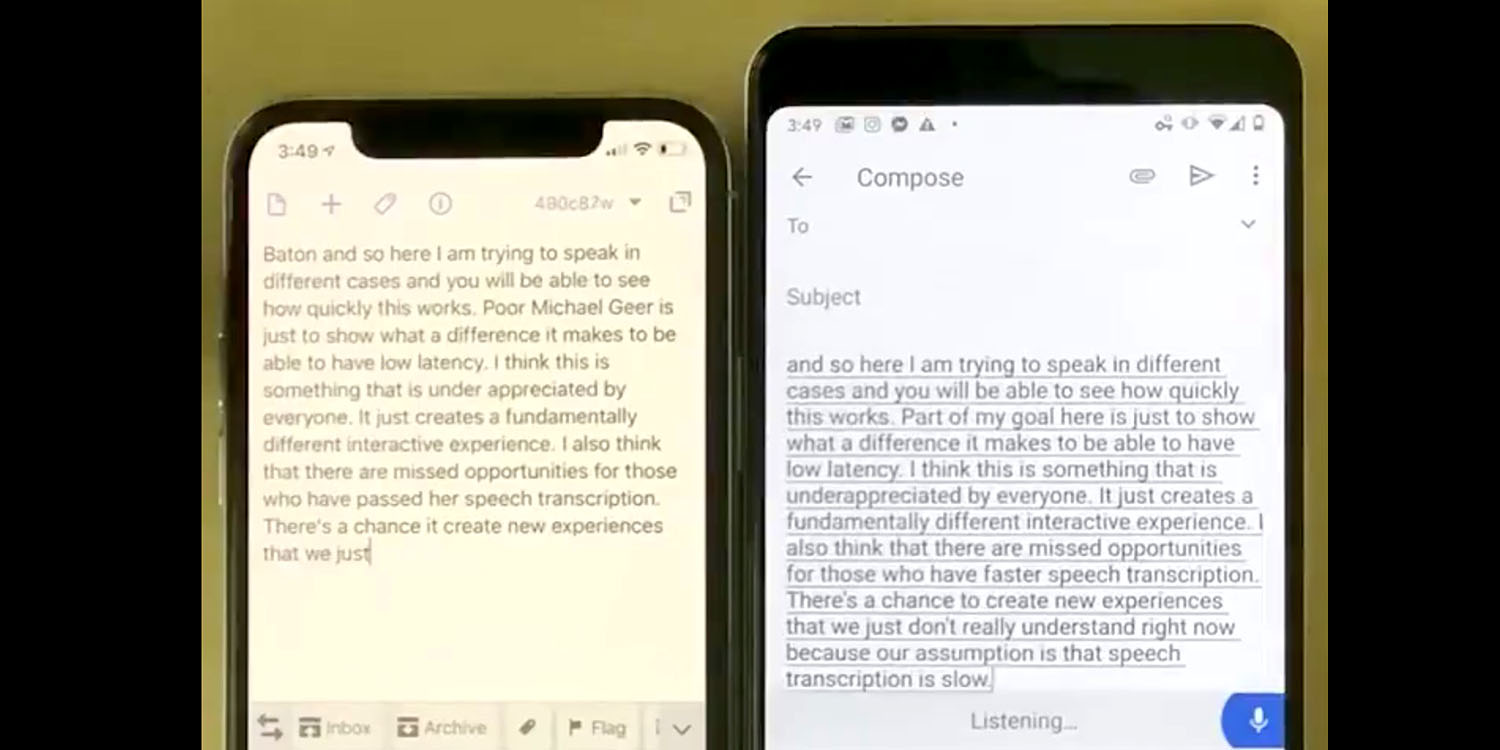 A head-to-head test of voice dictation on iPhone and Pixel shows that the Google smartphone is significantly faster than Siri at transcribing the speech into text.

The Pixel kept up with fairly rapid speech, while the iPhone lagged notably behind, as seen in the video below…

Developer and tech investor James Cham carried out the comparison, with both phones side-by-side in front of him, transcribing the same speech at the same time.

I don’t think that people appreciate how different the voice to text experience on a Pixel is from an iPhone. So here is a little head-to-head example. The Pixel is so responsive it feels like it is reading my mind!

He also argues that while the difference seen may matter little when dictating, it matters a lot when it comes to creating back-and-forth interactions between a person and an intelligent assistant.

Speed has its own quality — the current model for speech is like a command line. You say something and wait for a response. Now that voice to text is fast and uses fewer resources than you would think, there’s a chance for truly interactive voice experiences.

The point isn’t just who’s better or worse right now but what’s possible given our current position. Naturally, @gruber describes it more vividly than I could: “truly good voice-to-text would enable all sorts of new Star Trek-level interactions.”

Both phones can transcribe text on the device itself. Google says the Pixel uses ‘end-to-end, all-neural, on-device speech recognizer’ and that the company’s prime focus was to reduce latency.

This means no more network latency or spottiness — the new recognizer is always available, even when you are offline. The model works at the character level, so that as you speak, it outputs words character-by-character, just as if someone was typing out what you say in real-time, and exactly as you’d expect from a keyboard dictation system.

One commentator suggests that you can see near-Pixel speed by using the Gboard keyboard on your iPhone.

Fun fact you may be aware of: you can achieve near-Google-level transcription with Gboard on iOS! It's hampered on iOS by needing the app to run in the background but I like it better than Apple's transcription in many cases pic.twitter.com/eFRsoudhZH

However, a quick test here didn’t appear to reveal any significant difference in speed.

I use voice dictation on iPhone fairly extensively. As someone who works from home, and therefore doesn’t have to contend with either background noise or eavesdroppers, it’s my most common way to type on my iPhone. I also issue a lot of Siri commands to our HomePods.

I don’t personally find the speed problematic, but it would feel a lot more satisfying to see the speed demonstrated on the Pixel phone — and I do fully agree that low latency is important when it comes to more extensive interactions.