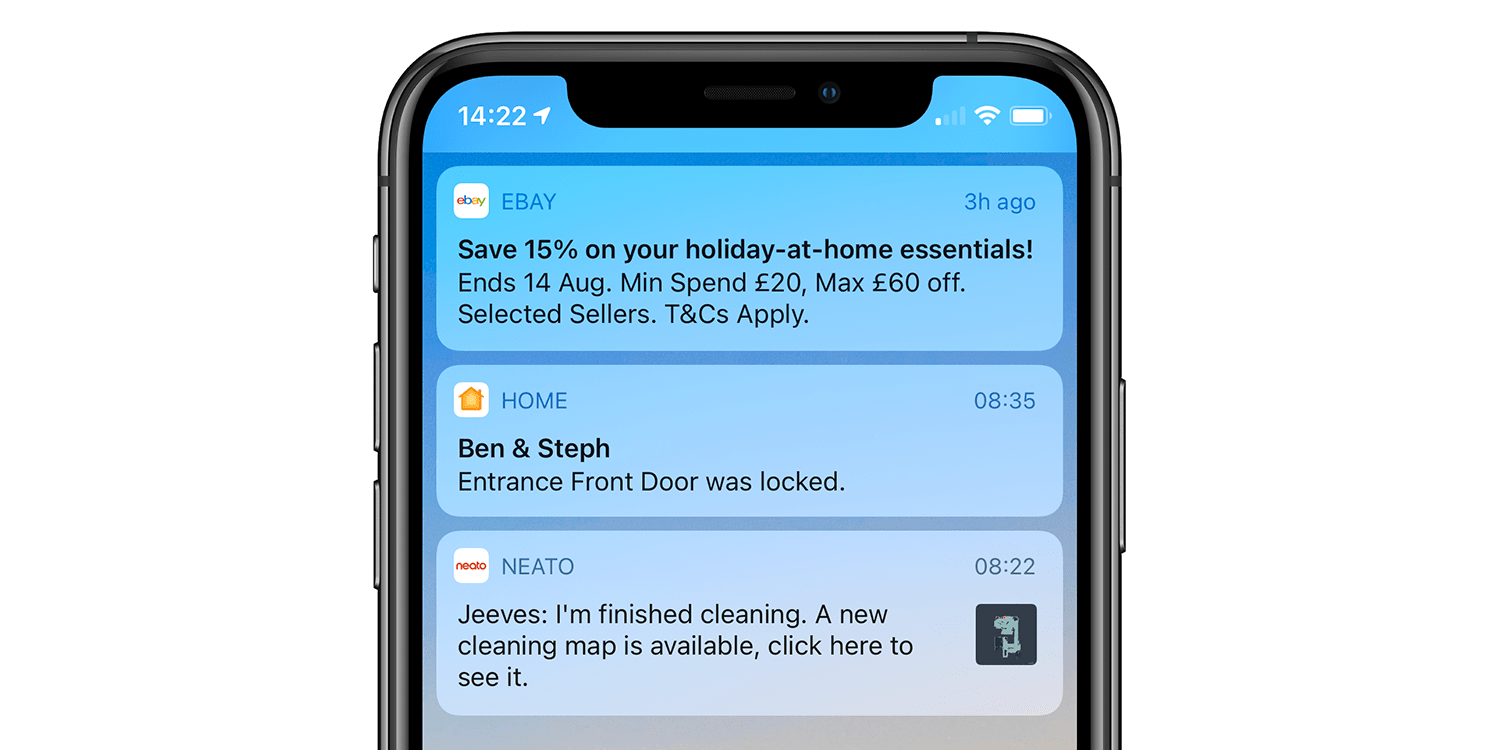 But I’d like more control than that, and the above screengrab shows why …

There are three notifications, two of which are unwanted. I don’t need to be notified when our robo-cleaner has completed its cleaning cycle, and I most definitely don’t want to be spammed by eBay.

I do, however, want both apps to be able to send me useful notifications. If I’m selling something on eBay, it’s useful to be notified when I receive a question about it, as well as when a sale goes through. If I’m buying something through eBay, it’s handy to know when it’s been dispatched.

The same with Neato. If Jeeves gets stuck somewhere, or needs the bin to be emptied, or the filter to be changed, those are all notifications I want to receive.

So what I really want are tiered notifications.

Most of our Feature Requests only require Apple to act. Happily, the company often does. I haven’t kept any stats, but many requests are fulfilled, even if they take a while. Just today my colleague Benjamin Mayo highlighted an iOS 14 feature I asked for back in 2018.

What I’d like here would require cooperation between Apple and app developers – although you could argue it only needs Apple to be persuaded, as it could easily make it a requirement for apps to support the feature.

I’d like apps to classify notifications into say three categories:

I’d then like to be able to specify which ones I allow.

For example, with the Neato app, the robo-cleaner getting stuck would be an Exceptional event, while completing a scheduled cleaning session would be a Routine one. I’d just allow Neato to display Exceptional notifications, but not Routine ones.

Similarly with eBay, a question about an item I’m selling would be an Exceptional event, while notification that something has been sold or dispatched would be a Routine one. I would personally allow both of those, but definitely keep Marketing notifications toggled off.

To keep things simple, I’d suggest the defaults are Exceptional and Routine on, Marketing off. That probably corresponds with what most people want today, though it could be argued it would be more consistent with Apple’s concerns about screen time to have Exceptional-only be the default. I’d happily live with either.

Would you like to see Apple implement this kind of tiered control over notifications? Please take our poll, and share in the comments examples of how you’d use it with your apps.