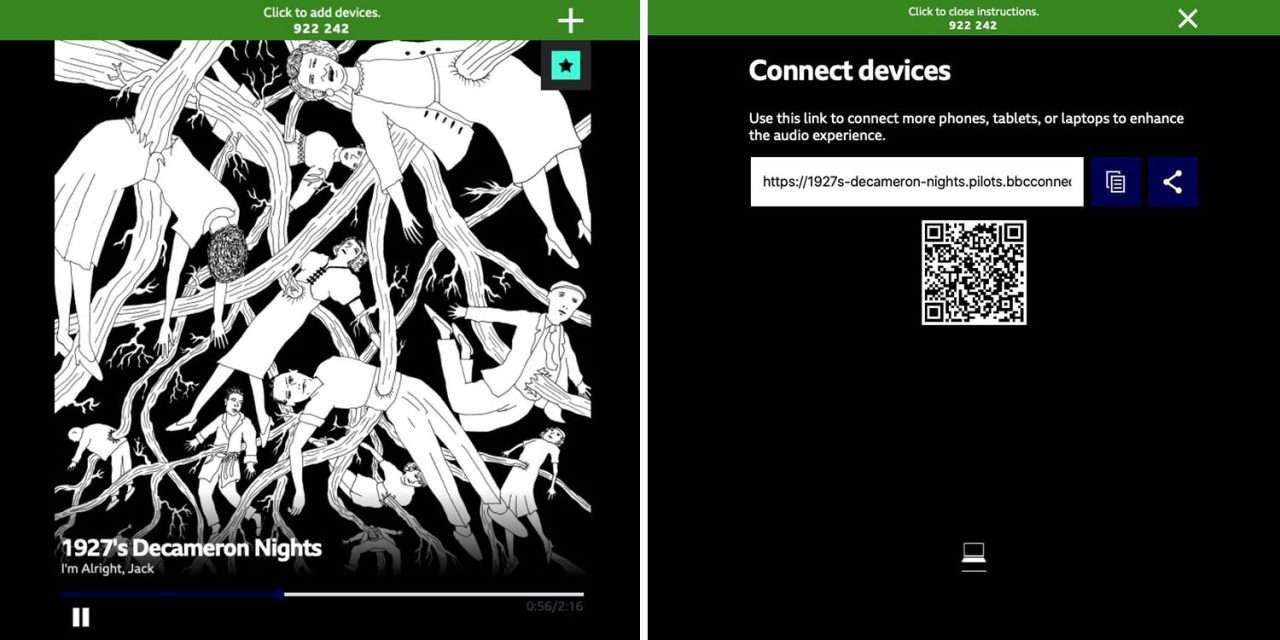 Britain’s BBC is trialing a clever new piece of technology that lets you use your iPhones and iPads as a kind of surround-sound speakers for your Mac.

You can try it today with a demo, and then listen to a radio drama series which uses it …

The BBC has unveiled the first ‘immersive audio experience’ made with its new production tool, Audio Orchestrator.

The slightly sinisterly-named tool is pretty clever: it syncs all your connected devices together (with your permission, obvs) so it can use their speakers to create real-feeling surround sound without needing fancy equipment.

The first thing made using the tool is a pilot series of folk tales called Decameron Nights. The first episode aired on the radio this week, but in stereo – you have to use BBC Taster (“our platform for trialling new and experimental technology with the public” – very W1A) to get the full immersive experience.

You can be up-and-running with it in less than a minute. Simply go to this webpage on your Mac and click Try at the top. Once you’ve done that, click the start session button and then the green ‘Click to add devices’ bar at the top.

A QR code will be displayed. Open the Camera app on your iPhone or iPad (running iOS 11 or later) and open the webpage it presents on the device. Click Connect to allow the use of the device and you’re up-and-running in the demo. Repeat for as any iOS devices as you have available (the feature supports up to 100). Click the Begin button to listen to the first episode of the Decameron Nights drama.

I just tried it with an iPhone and iPad, and it really is a fun experience. Here’s how the BBC describes it.

Here at BBC R&D, we have been exploring the exciting field of personalised and immersive listening experiences in addition to the emergent technology needed to support them. A particular area of focus has been spatial audio. Traditionally, audio productions are created for a fixed arrangement of loudspeakers—for example, “stereo” or “surround sound”. And it’s not unusual for them to be played back from a single speaker. But it’s becoming more and more common for listeners to have access to different types of devices that are capable of reproducing sound, including Internet-connected devices like mobile phones, tablets, and laptops.

Listeners are now surrounded by ‘hidden speakers’, and these offer a wealth of spatial audio opportunities to explore. We do this by orchestrating the devices—synchronising them and dispersing the audio playout between them. Simply put, creators can determine when and where in space a sound should come from, enveloping listeners in sound. Audio Orchestrator is a production tool that allows content creators to explore this potential.

This technology is both dynamic and flexible and can respond on the fly to the number and types of devices connected to a session, leading to deeply personalised solo listening experiences or vast communal ones that bring audience members together with hundreds of devices in play.

1927 have reimagined Decameron Nights through this lens, taking the existing rich array of strange sounds, eerie effects and exquisitely haunting music to elevate the soundscape further by placing listeners and their connected devices at the very centre of the story.

Sadly, I can see no way to use it with HomePods, but I highly recommend trying the experience. It also works with Windows PCs and Android devices, as well as with multiple Macs.