Nomad Base Station Pro: The next step in wireless charging [Video] 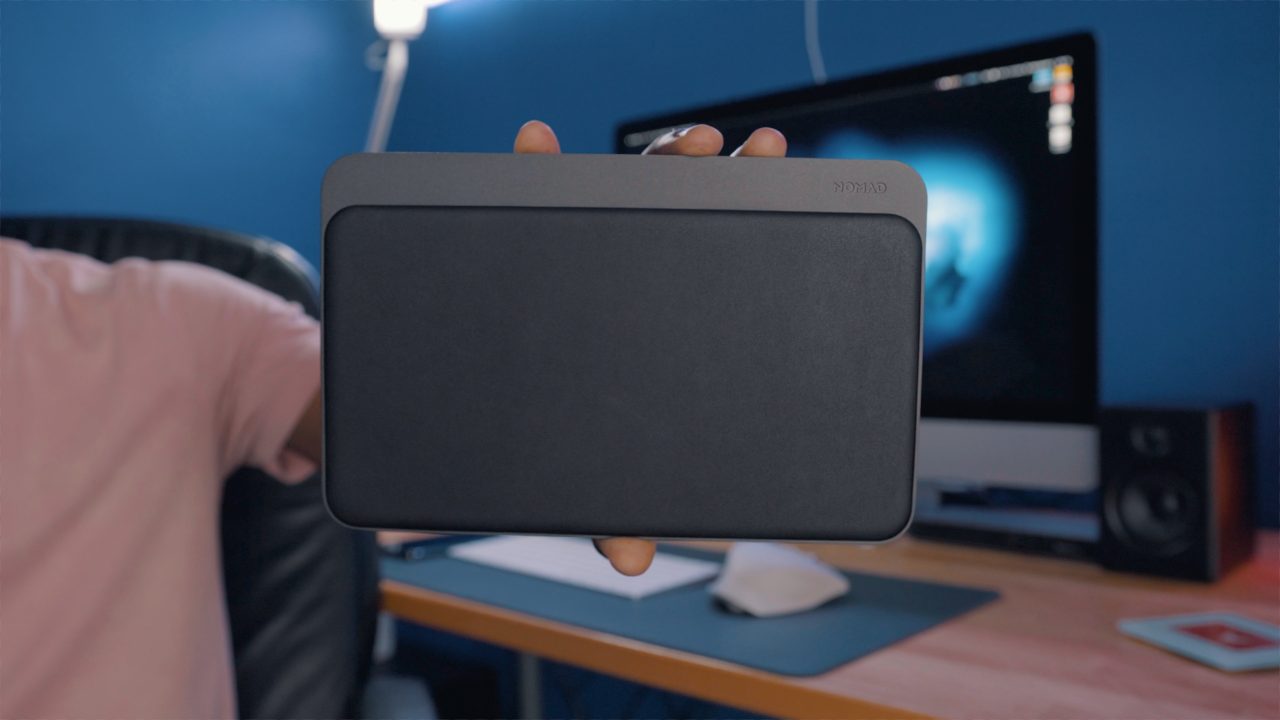 Wireless charging technology development-wise has been fairly stagnant on a mainstream front since its introduction. Besides incremental speed improvements, the technology itself hasn’t fundamentally changed much since its debut. The mode of operations for most manufacturers in recent years has been simply taking the same parts off the shelf and throwing it in new and fancy housing.

Nomad is looking to make a major change within the wireless charger market and has partnered with a company out of Arizona called Aira. Aira’s developed this technology called FreePower that essentially solves what AirPower was trying to do. Seamless three-device charging, no matter where you place it on the surface. The Nomad Base Station Pro is the first device on the market to feature FreePower technology.

The Base Station Pro is packaged up nicely with a slate grey aluminum chassis and padded leather mat for charging. Nomad did the smart thing and put USB-C on the back instead of a proprietary charger that you won’t be able to easily replace. Overall the design the classic Nomad, which means you’re getting a premium build combined with a minimalist design. It’s got grippy rubber feet on the bottom, so it won’t slide around. And with a height of 1.2cm, it’s no thicker than your typical wireless charger.

Video: Nomad Base Station Pro: The Best 3-In-1 Wireless Charger!

Functionality-wise, this charger does deliver as advertised. It can comfortably charge two phones and a pair of headphones, or two pairs of headphones and a phone simultaneously. You can put your devices down at nearly any angle and it’ll catch a charge. The biggest observation I’ve made with FreePower charging versus a traditional wireless charger is speed. Speed in this context being how it takes for the device to start charging once it’s placed on the mat. FreePower isn’t “slow” in this regard, but It’s noticeably slower than a traditional wireless charger. Slow enough for your brain to build up anticipation for a charging confirmation. Nonetheless, I never missed a charge in my usage.

I played around with a lot of different placement positions to determine how much of the phone could be hanging off of the charger while still providing a charge to the device. I would say as long as you have at least 85% of the body on the charger, it’ll guarantee you a charge. But this is still better than the precision that’s required with standard wireless chargers today. With a typical wireless charger, you’ll need to have the phone lined up exactly with the charging zone, otherwise, nothing’s happening. That’s been my biggest problem with wireless chargers. I couldn’t count the number of occasions where I’ve woken up with my phone or AirPods on 60% battery because it was slightly bumped overnight. This Base Station Pro almost eliminates that problem entirely.

The Base Station Pro uses an 18-coil proprietary Matrix. And unlike your average wireless charger, the coils are essentially baked into the board. When you look at how thin this board in the middle is, it really does excite me for how the potential real-world applications for this tech. FreePower charges by dispersing tiny bursts of energy at an extremely fast rate versus sending bigger waves of energy at a slower pace.

Another cool feature that FreePower brings into play is intelligent multi-device charging. The Base Station Pro gives you 30 Watts in total, and the charger will essentially divvy that power up per-device depending on what the device is. Maybe the phone you’re charging only needs 8 watts while your earphones only need 2 watts. FreePower will allow the Base Station Pro to know exactly how much the device needs so that it’s able to charge as efficiently as possible.

This is a first-generation consumer product for both Aira and Nomad, and given that, I think this device is already so much better than most wireless chargers out there, and while it’s somewhat expected because of the price tag that this product commands ($229). I do believe that this is the first step in the future of wireless charging.

Aira says that software updates through USB-C to improve usability and performance would be something we’ll see in the future. Software updates should be able to fix some of the Base Station Pro’s first-generation limitations, like the speed for it takes to initiate a charge.

As far as the Base Station Pro itself, I would like to see a future version have larger and more visible LEDs, I understand that Nomad generally goes for the minimalist design approach, but you can only see these LEDs clearly when the charger is directly in front of you and at an appropriate angle. When you’ve got devices on top and potentially hanging off the edge a little, the LEDs are almost useless in certain scenarios. There’s a substantial amount of space on the top side of the body, maybe the next version of the Base Station Pro can have the LEDs moved there.

As far as Apple Watch compatibility, you might know that the Apple Watch uses a proprietary wireless charger. It’s not going to be immediately usable here, unfortunately. But Nomad said they’re going to be releasing an add-on attachment for the Base Station Pro sometime next year. Overall though, this is the next step in wireless charging. And I can’t wait to see where FreePower goes in the future and especially within Nomads product line. The Base Station Pro is available for pre-order starting today for $229. Will you be picking one up? Sound off in the comments below!