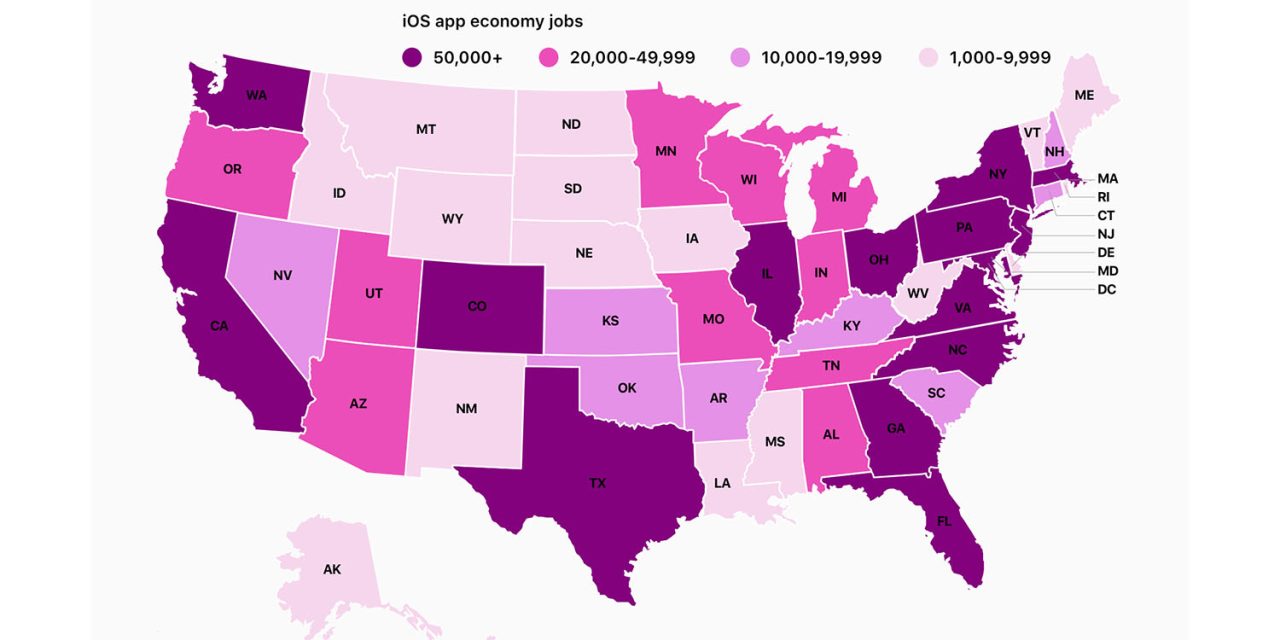 The coronavirus crisis may have been very bad news for the economy as a whole, but Apple says that the iOS app economy has been thriving, creating 300,000 new US jobs since April 2019 – and the pandemic boosting rather than hurting that progress.

The company says that iOS apps now support 2.1 million US jobs, notably on the East and West coasts, but with significant numbers in the majority of states…

Apple provided the numbers this morning.

The iOS app economy has created nearly 300,000 new jobs since April 2019, helping to provide opportunities for Americans of all ages even as COVID-19 continues to create immense challenges and uncertainty for communities across the country. Developers nationwide — including companies such as Caribu, H‑E‑B, and Shine — have adapted their businesses to make sure they can keep supporting their customers during a challenging time […]

Despite the pandemic, the App Store continues to provide economic opportunities for entrepreneurs of all sizes, helping anyone with an idea reach customers around the world and take advantage of new opportunities that would never be possible without it. The App Store ecosystem now supports more than 2.1 million US jobs across all 50 states — an increase of 15% since last year — as part of the 2.7 million jobs Apple supports across the country.

The company says that’s no surprise: Apps have never been so important, a point we made in May.

Apps have become even more critical to Americans’ everyday lives as they seek out new and safe ways to learn, work, and stay engaged with friends and family during the pandemic. The App Store provides support for remote ordering from restaurants, vibrant and impactful remote learning for students, telehealth for patients and doctors, and digital commerce for small businesses.

The map above indicates the iOS app economy jobs by state. Apple highlighted dramatic growth in Texas, Maryland, and Michigan.

The company also emphasized the role it plays in helping create new developers.

As the app economy continues to grow, Apple is investing in educational programs and opportunities that help prepare learners of all ages for the app economy jobs of the future. With Swift Playgrounds, Everyone Can Code, and App Development with Swift, Apple gives anyone interested in learning to code the tools and guidance to get there. Today more than 9,000 K-12 and higher education institutions worldwide are using Apple’s coding curricula, including over 100 community colleges across the US. And Apple coding academies, accelerators, and Entrepreneur Camps give up-and-coming developers the opportunity to apply the latest technologies to their apps, build their businesses, and market their ideas to a global audience.

Jobs created and taxes paid are two of Apple’s key weapons in fighting antitrust questioning of the cut it takes from apps and in-app purchases.