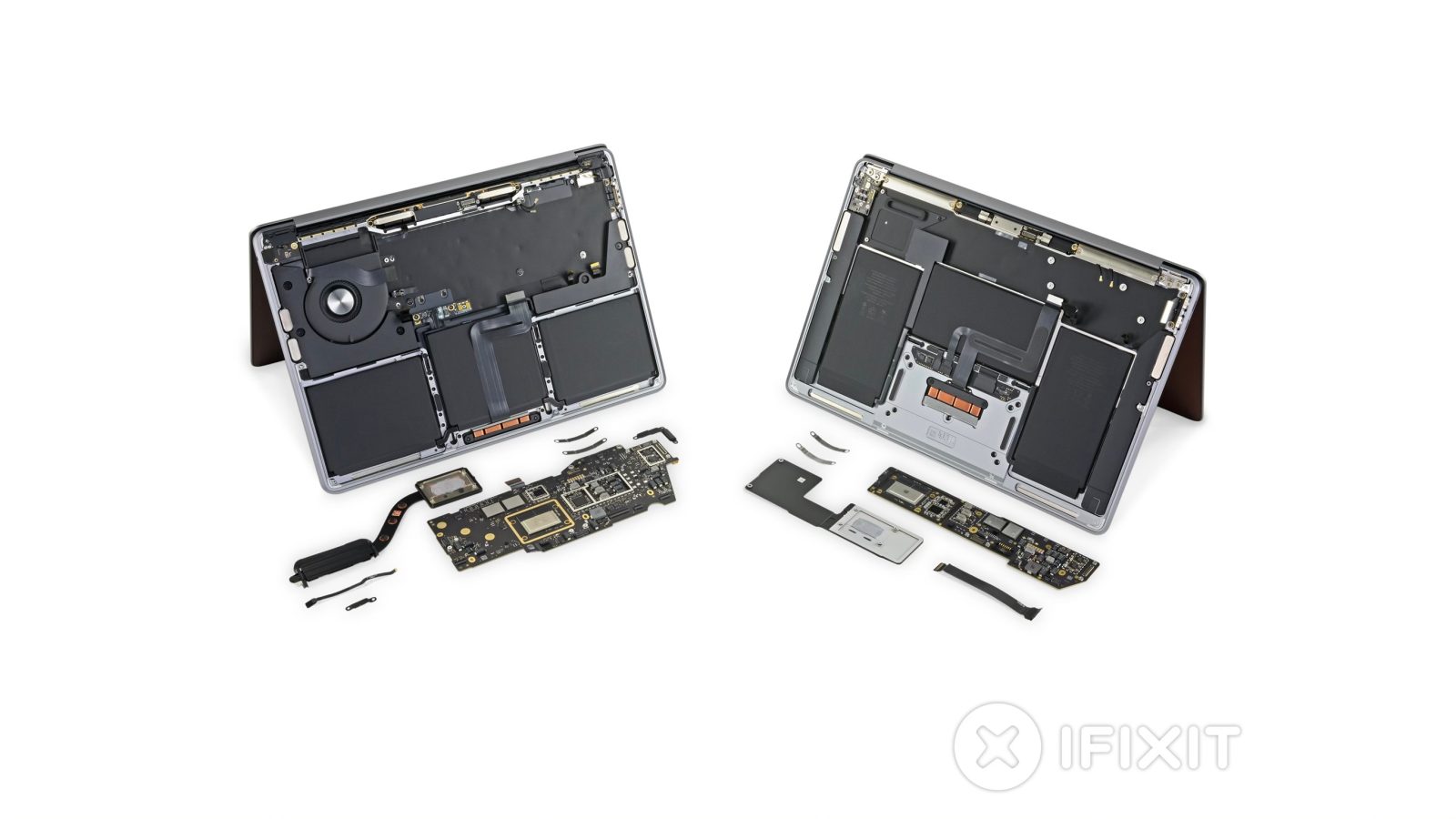 We continue to learn more about Apple’s new M1-powered MacBook Pro and MacBook Air. This afternoon, the folks over at iFixit have published their full teardowns of the new MacBooks, and things are incredibly similar to the Intel-powered predecessors.

The biggest change for the MacBook Air is, of course, that it no longer features a fan on the inside. Apple removed the fan with the new Apple Silicon MacBook Air, instead opting for an aluminum heat spreader hanging off the left edge of the logic board.

iFixit explains more details about how the new MacBook Air keeps itself cool:

There’s just not much to go wrong here. A thick cold plate over the M1 processor draws heat via conduction to its flatter, cooler end, where it can safely radiate away. Without a fan, this solution may take longer to cool off, and may cap out sooner, but by foregoing heatpipes or a vapor chamber, the sink also has more mass to saturate with thermal energy. There are no moving parts, and nothing to break. You’ll want new thermal paste occasionally, and that’s about it.

Other than the removal of the fan, iFixit says the new MacBook Air is “but identical to its predecessor.” The battery is slightly different, but the overall repair process will “likely remain almost totally unchanged.”

The new MacBook Pro is also incredibly similar to its Intel predecessor. While there had been speculation that the fan might be different and quieter this year, that’s not the case:

It turns out, not so much: our M1 MacBook Pro’s single fan is identical to the fan in the two-port Intel MacBook Pro 2020 we picked up earlier this year. Not similar—identical.

In other words, what you’re not hearing there is the sound of an aggressive fan curve. This thing likely never spins at more than a fraction of its upper limit. Remember, this same M1 chip performs well in the fanless MacBook Air, so this fan likely doesn’t have all that much to do even under extended load.

Then, there’s the M1 chip, which is the same inside both the MacBook Air and MacBook Pro. As we already knew, it’s a 5nm processor with an 8-core design featuring four high-performance cores and four efficiency cores.

Next to the new M1 chip inside the MacBook Air and MacBook Pro, you’ll find Apple’s new integrated memory chips. iFixit says that these Unified Memory Architecture modules are very similar to what Apple has used inside recent iPad models.

If it looks familiar, it might be because you’ve seen one of our recent iPad teardowns. It’s no surprise that Apple copied some of its own homework here. By baking RAM into the M1 package, each part of M1 (CPU, GPU, Neural Engine, etc) can access the same memory pool without having to copy or cache the data in more than one place.

The full review can be found over at iFixit, and it’s definitely worth checking out.