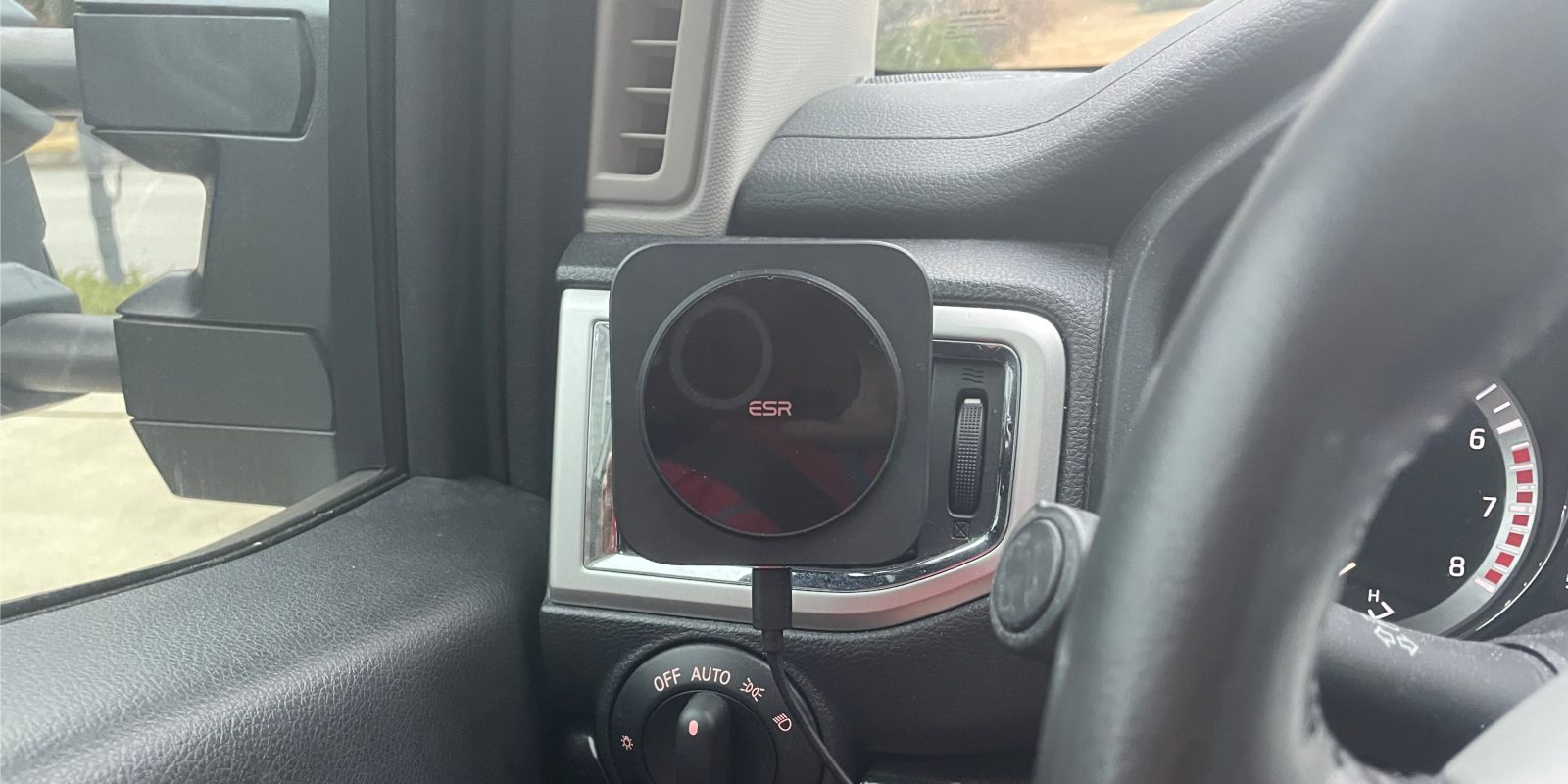 MagSafe was one of the headline features for the iPhone 12 lineup this year. While there are plenty of first-party and third-party options to charge at home, the only MagSafe compatible car mount doesn’t keep your iPhone charged. For the past month, I’ve been using the ESR HaloLock car vent mount to keep my iPhone 12 mini charged in the car while giving me a clear view of turn-by-turn directions.

The only MagSafe certified car mount is Belkin’s MagSafe car vent that Apple announced during the iPhone 12 announcement. We recently reviewed it here on 9to5Mac, and we found that it’s good, but not great. The key problem is that it doesn’t keep your iPhone charged, but otherwise, it worked great. For long trips, keeping your iPhone charged is crucial, so it’s not surprising that other manufacturers are filling the gap.

Watch the video below to hear our thoughts on the Belkin model, and check out the full review.

The ESR HaloLock was announced right after the iPhone 12 was, and I pre-ordered it right away. First things first, though. It’s MagSafe compatible but not MagSafe certified. Does that matter in practice? In my experience, no, it doesn’t. I’ve been using the product without fail for weeks. It’s not fallen off a single time, even when going over bumpier roads. ESR says it’s only compatible with Apple’s official case and their ESR HaloLock cases.

I was using a third-party case that claimed MagSafe compatibility originally, and while it worked, it wasn’t near as secure as when using Apple’s official iPhone 12 mini case. Since switching over to the official case, the magnetic connection is powerful. I would recommend using an official case if you plan to use the ESR HaloLock.

The HaloLock installs in under five minutes. All you have to do is snap the vent mount to the charging block and then slide it into a free car mount. If you’d prefer to have a MagSafe compatible car mount that attaches to the dashboard, ESR sells a similar model for that purpose, but I personally like having it on the vent so it’s easier to look at directions.

The ESR HaloLock charges over the included USB-A cord. My truck has a dedicated USB charging port, so I ran the cable under my steering wheel to hide it, so now when I pop my iPhone 12 mini on the HaloLock, it snaps into place and immediately starts charging. It supports 7.5watt charging if the USB port you are plugging into supports that output. A charging block isn’t included with the product, so if your car doesn’t have a USB charger, you’ll need a car adaptor. I’ve been using the stock USB adaptor in my car, and I’ve not had any issues keeping my iPhone charged while using GPS or letting my kids using my LTE hotspot.

The product is pretty simple to explain. It snaps into your car’s air vent, and then it plugs up to USB to enable charging. When you put your iPhone 12 on the HaloLock, it’ll snap into place and start charging. It supports vertical or horizontal orientation, so you can easily use one for travel around town and another for long trips. Because it’s using the MagSafe technology on your iPhone 12, there’s no need to plug up a second charger. You’ll pop your phone on it while your driving and grab it when you park.