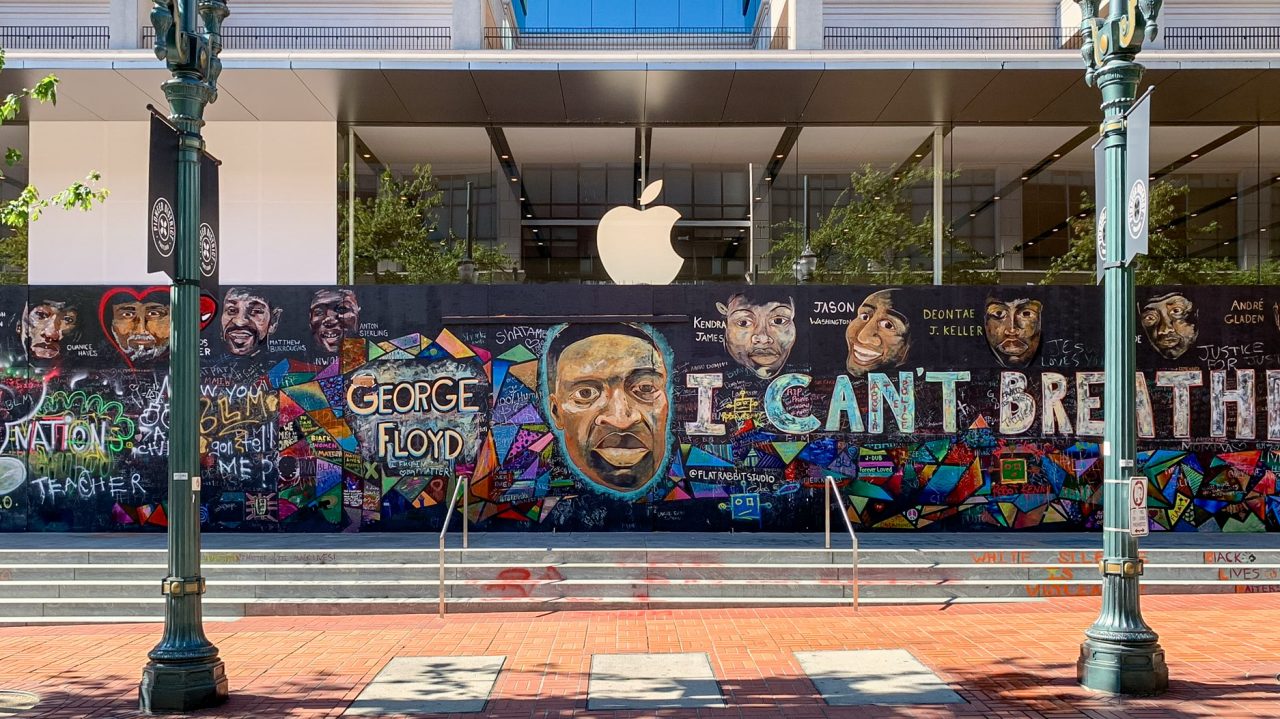 The vibrant George Floyd mural surrounding Apple Pioneer Place in Portland, Oregon will live on under the care of nonprofit Don’t Shoot PDX. Apple donated the community artwork in hopes of preserving the sprit of 2020’s social and racial justice protests.

Plywood barricades at Apple’s downtown Portland store gave a voice to the community this past summer, when muralist Emma Berger painted a portrait of George Floyd and the words “I can’t breathe.” Virtually overnight, the plain black boards were transformed into an expressive collage that captured the fight for change.

Recognizing the historic significance of the artwork, Apple covered the mural last December to preserve the artwork. The company announced at the time that long-term plans would be revealed in early 2021.

Don’t Shoot PDX, a “social justice nonprofit that promotes art, education & civic participation to create social change,” announced on its website that it has accepted the responsibility of preserving the panels. The group is actively involved in the community and this past week hosted the 7th annual MLK Day March in downtown Portland. Don’t Shoot PDX invites any artist who participated in the mural to reach out and stay connected.

In a statement to The Oregonian today, Apple said:

Artists in the Portland community reimagined the blank canvas surrounding our Pioneer Place Apple Store and created a monumental art piece honoring the ongoing fight for justice and the lives of George Floyd, Breonna Taylor and Ahmaud Arbery. Apple stands in support of the artists and all who are fighting for social and racial justice. We are honored to have hosted the murals and are very happy to entrust the artwork to Don’t Shoot Portland in support of their advocacy for social change.

Don’t Shoot PDX hasn’t yet announced if the murals will be on public display in the future. Apple Pioneer Place remains temporarily closed and will require further repairs before reopening.