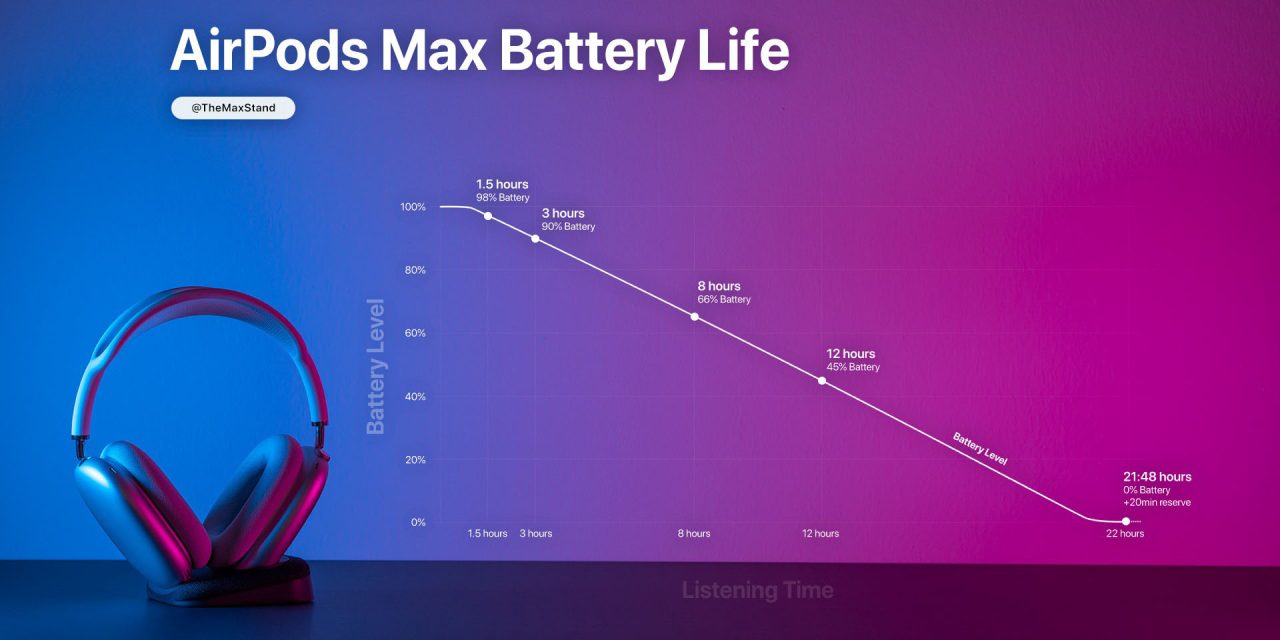 A set of independent tests shows that the AirPods Max battery life lives up to Apple’s claims.

Apple makes two key claims about battery life. First, that the over-ear headphones last for “up to” 20 hours with both ANC and spatial audio in use, and they actually did somewhat better than this under testing …

The tests were conducted by a design agency as part of a promotion for its own charging stand for the AirPods Max.

Apple: “Your AirPods Max can get up to 20 hours of listening time, talk time, or movie playback when you have Active Noise Cancellation and spatial audio turned on.”

In our test, we used fully charged AirPods Max and played the Global Top 100 playlist from Apple Music on an iPhone in a loop. We turned up the volume to 75% with active noise cancellation turned on. The AirPods Max lasted around 22 hours, before they turned off and disconnected from the iPhone.

What seems less accurate is the battery percentage indication.

It took more than 1 hour to go from 100% down to 99%. While the rest of the chart shows a more linear discharge, the same behavior can be seen at the end, when it again took around 1 hour from 1% battery until they disconnected. Keep in mind, this relies on Apple’s displayed battery level and might not reflect the actual battery charge itself. The reasons for Apple deciding to display the percentage this way are up for speculation.

Apple also claimed that if you do run out of power, charging the headphones for just five minutes will get you another 90 minutes of use. This claim, too, was found to be accurate.

Apple: “If you charge your AirPods Max for 5 minutes, you get around 1.5 hours of listening time.”

To test Apple’s claim, we did charge the fully drained AirPods Max for exactly 5 minutes. This gave us 1 hour and 39 minutes of listening time, playing the Global Top 100 on Apple Music at 75% volume with active noise cancellation on.

As Apple acknowledged in a support document issued some time after the headphones went on sale, use of the Smart Case makes no difference in real-world use.

We tested both — leaving the AirPods Max stationary outside the Smart Case and putting them in the case to see how much the battery will drain in comparison. When leaving the AirPods Max stationary outside the Smart Case for 12 hours, we saw a drop of 5% of displayed battery life. We also let them rest 12 hours inside the Smart Case and also saw a drop of 5%. According to Apple’s displayed battery level, although some rounding could have been applied, both setups seem to perform equally, and we didn’t see a major difference. The battery drain is roughly 1% every 2.5 hours. It remains to be seen how efficient the ultralow power mode is, which Apple claims to kick in after 72 hours outside, and 18 hours inside the Smart Case, but it’s unlikely to play a role in typical use cases.

Some users, however, are reporting massive battery-drain overnight – even going from 100% to 0% in some cases. We haven’t yet heard any explanation of what might be causing this.