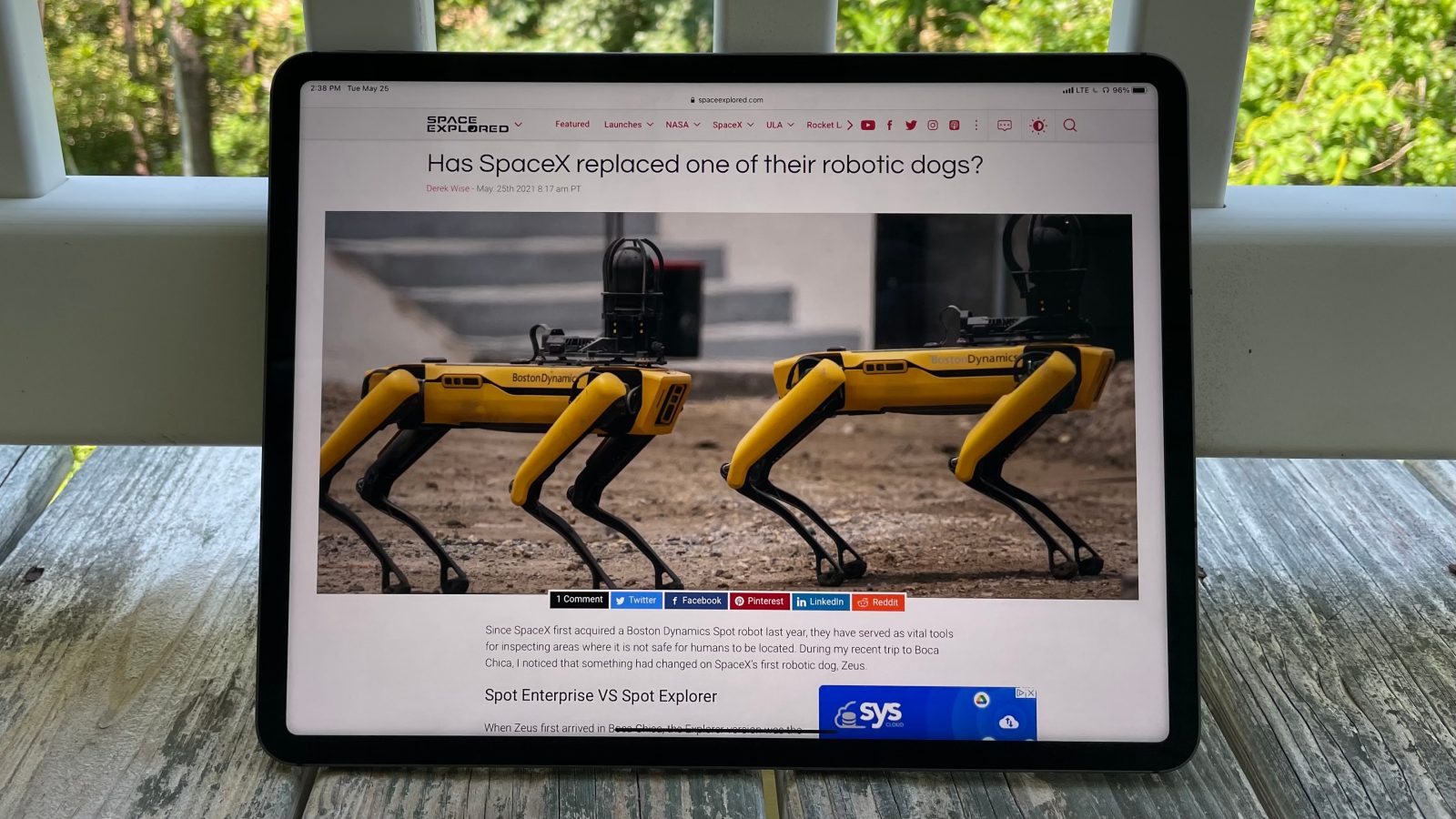 Robot dogs (we can explain) on iPad Pro

My rationale for buying the new 12.9-inch iPad Pro is simple: I’m dissatisfied with the state of multitasking on iPadOS, but this is the best hardware to evaluate current and future software versions. And if iPadOS 15 doesn’t save the day at WWDC, this iPad Pro has some sweet new camera tricks and an all-new mini-LED screen.

The 12-megapixel ultra wide camera with Center Stage is, by far, my favorite new feature on the 2021 iPad Pro. Both the 11- and 12.9-inch iPad Pro front cameras introduce this upgrade selfie cam.

I’m familiar with the wider selfie cameras on the iPhone 12 lineup, and the iPad Pro ultra wide camera still surprised me. It’s wild just how wide the new camera is. Like fit-your-whole-body-in-a-selfie-while-holding-the-iPad wide.

Portrait mode with the front camera is also solid as ever with the True Depth sensor assisting, but it’s a fixed perspective and doesn’t include a wider view.

Center Stage was a good idea when FaceBook included it with its smart home thing called Portal, and it will actually be used by real people now that it’s on the iPad Pro. This will be even more true when Center Stage comes to more iPads and (seriously, c’mon new iMac) the Mac.

By following and cropping into the subject or subjects using face detection, Center Stage is best in practice when using the iPad Pro in landscape orientation. Including my kid in a FaceTime call with family automatically when he sits by me without extending my arm way out is really convenient.

Center Stage also works in tall portrait orientation and square crops on group FaceTime calls. It works best when your iPad is in a fixed location and you’re moving around the ultra wide camera’s 122-degree field of view.

The zooming in and out and panning around can be distracting when you’re holding the iPad and moving around with it, however, but fortunately, there’s a Center Stage on/off toggle as part of the FaceTime user interface.

This handy toggle is necessary when the Center Stage effect isn’t being useful and looks more like Instagram’s “romantic” Superzoom filter.

The 12.9-inch Liquid Retina HDR display, as Apple calls it, is seriously impressive on paper. It uses mini-LED backlighting like the $6,000 Apple Pro Display XDR but somehow packs in more than 10,000 mini-LEDs with over 2500 local dimming zones. This technology is behind the 12.9-inch iPad Pro’s 1,000,000:1 contrast ratio, a measurement of the difference between bright whites and dark blacks.

Mini-LED is an improvement over LED-backlit displays by a long shot, and it’s a practical alternative to OLED screens found on new iPhones and every Apple Watch. The 12.9-inch display touts noticeably better black levels and high dynamic range video playback that arguably rivals OLED televisions.

Like OLED, you really can’t appreciate the impact of mini-LED outside of dark user interfaces and any video content (especially HDR). I definitely notice a dark border around white UI that I’m told is viewable on other iPads with this same thin-bezel design.

OLED screens on iPhones and Apple Watches (and at a larger scale, on TVs) still impress me today after years of use. The characteristic of black pixels not lighting up at all delivers an effect that really appeals to my eyes. This iPad’s mini-LED technology definitely isn’t OLED in terms of matching that experience, but it’s light years better than the previous display type for watching HDR video.

Where it falls short is interesting. As an OLED enthusiast, I was quick to test the new iPad screen in pitch black environments with various levels of brightness. I was disappointed to find that white elements like status bar icons, border lines around sections of an app, and especially white text on a black screen really do not do well.

I expected some amount of blooming, the effect that happens when non-black UI elements are backlit and that light spills out into the black UI. But the level of blooming in dark mode throughout non-video applications is really surprising. It’s quite possible that the current software on these iPads can be optimized to take better advantage of the additional dimming zones to reduce blooming, but the launch software isn’t there yet (and this part has nothing to do with multitasking).

In my experience, this blooming effect is challenging to capture on camera without appearing exaggerated. That’s in part because my eyes can perceive it at lower brightness levels than a quick shot on my iPhone with night mode disabled. It’s easier to capture what I see with my eyes through the camera with the iPad’s brightness cranked up, but the effect is there in practical use regardless of brightness levels in dark environments.

There’s way more to unpack with both sizes of the new iPad Pro, so stay tuned for our comprehensive review on 9to5Mac. In the meantime, I’ll leave you with a few thoughts about my experience so far:

Have one of the new 2021 iPad Pros or on the fence about the new mini-LED screen? Let’s us know your thoughts and tell us about your experience in the comments!