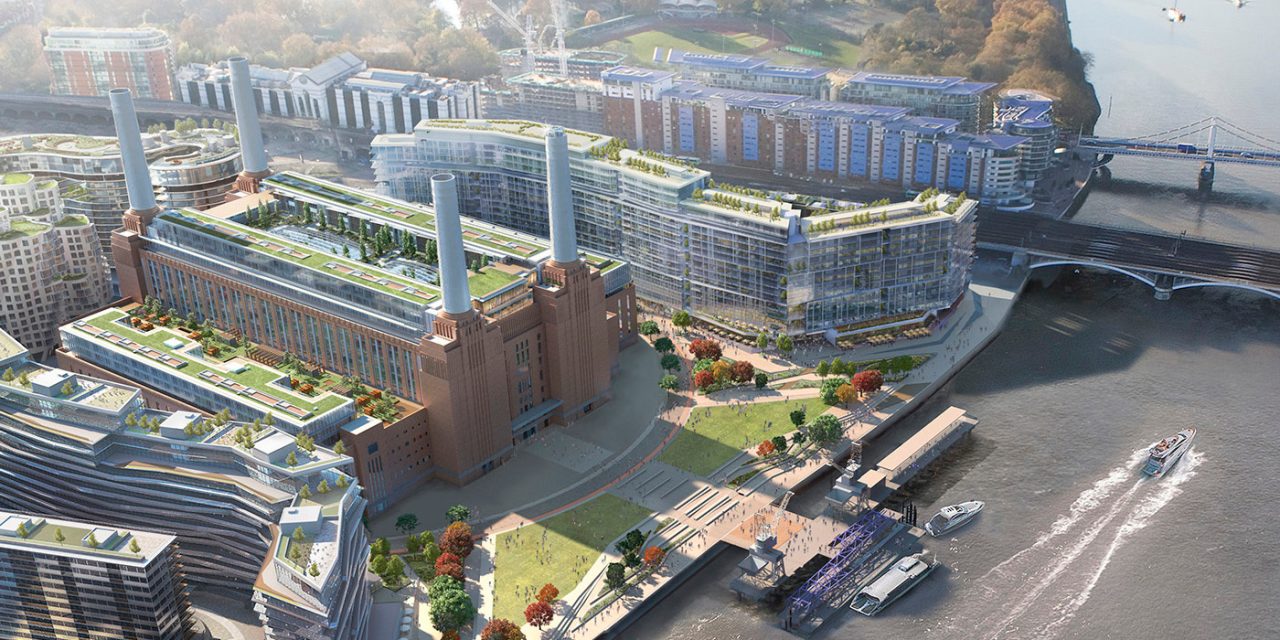 The first new section of the London Tube network this century opened today, providing service to Nine Elms and Battersea Power Station – which will be home to Apple’s London campus …

Battersea Power Station comprised two coal-fired power stations in one building. The first was decommissioned on 1975, and the second in 1983.

Since the building was an iconic part of the London landscape, it was given “listed” status, which means that the overall appearance of the building had to be preserved and protected as part of any redevelopment.

Various redevelopment plans came and went over the years, before agreement was finally reached for a combination of apartments, office spaces, and retail stores.

Part of the challenge for the development was the lack of transport connections. London is a densely populated city, and the London Underground railway system – colloquially known as the Tube – plays a vital role in transporting commuters. Extending the Tube to Battersea Power Station was a hugely expensive undertaking – at a cost of one-and-a-half billion dollars for a stretch of just two miles – so an agreement was made for the cost to be split between the developers and Transport for London, with the latter contribution clawed back from business taxes once the development opened.

The redevelopment was only going to succeed if it were to prove prestigious enough to attract big names to the area. That was successfully achieved when the US decided to relocate its London embassy to Nine Elms, and Apple announced its plans to create a new London campus inside the former Battersea Power Station.

Apple announced its plans in 2016, with the campus expected to open this year – though when staff will actually move in is unknown now, thanks to the pandemic.

Apple said it was looking forward to the 2021 opening of “our new London campus” as staff relocate to “this magnificent new development at one of the city’s best-known landmarks”. It added: “This is a great opportunity to have our entire team working and collaborating in one location while supporting the renovation of a neighbourhood rich with history” […]

Apple won’t have exclusive use of the building, with homes, offices, shops and leisure facilities sharing the space – but the company will be the largest tenant, leasing half a million square feet. This makes it one of the largest single office deals signed in central London in the past 20 years. The total floor space will provide Apple with breathing space, with room to expand to a total of 3,000 staff if required.

A band of train enthusiasts, TfL staff and journalists gathered before sunrise beneath the silhouette of Battersea Power Station.

When the gates opened to the public for the first time just after 05:20 BST, more than 100 people bustled down to the platform to catch the first service to Kennington […]

This is the first major expansion of the Tube since the Jubilee line was extended in the late 1990s. Wood Lane and Heathrow Terminal 5 stations opened in 2008.

The Greater London Authority borrowed £1bn for the latest project, which will be funded through business rates from the local area and about £270m of contributions from developers.

The Telegraph has a somewhat odd report on some of the details.

Pop star Sting is also a resident, even making a surprise appearance on the community Zoom choir earlier this year. And Sting could well have unwittingly played a far more important role in attracting tech giant Apple, the power station’s “most important tenant”, says Murphy. The prospect of rubbing shoulders with Sting helped clinch the deal when Tim Cook, a Police fan, visited the site five years ago […]

A rare glimpse of the offices reveals no expense has been spared. Four iPhone-shaped lifts have been installed and 20 iPhone-shaped windows are being put in.

Since the iPhone is a rectangle, not an unusual shape for either windows or elevators, one assumes this refers to them having rounded corners. We’ll need to wait and see.

You can see below a few renders of the finished development.