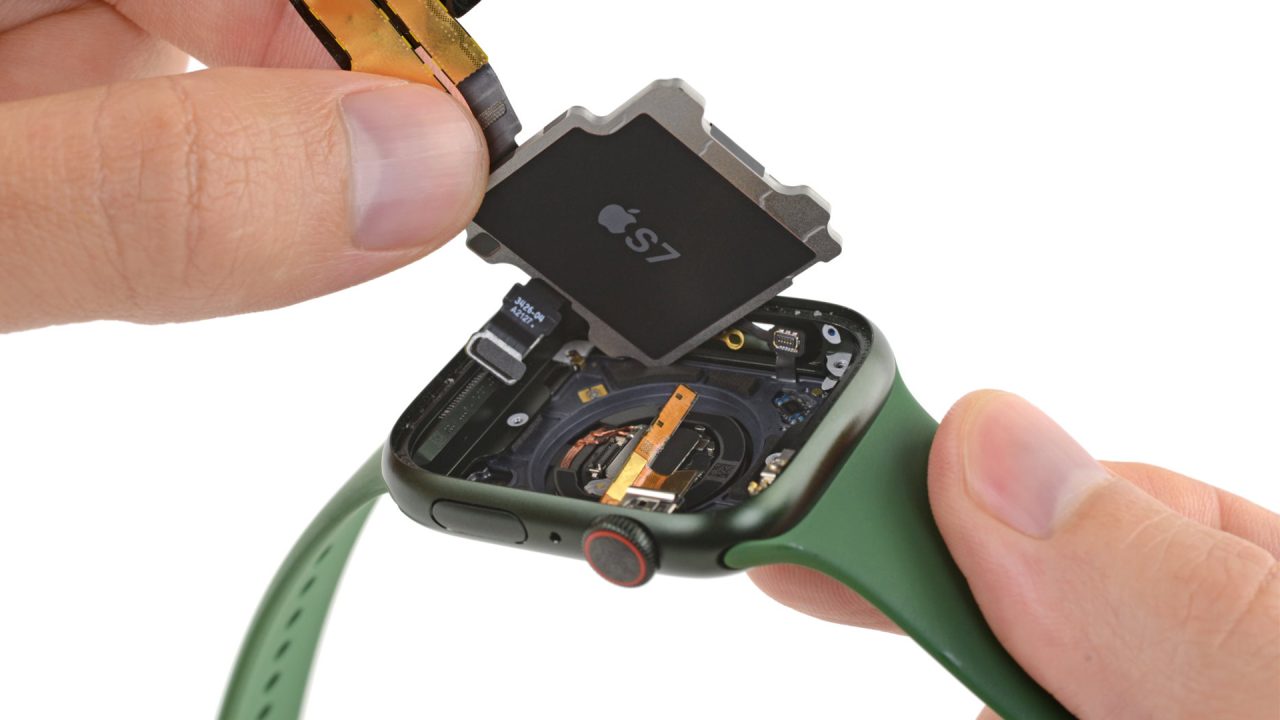 Apple Watch Series 7 was announced in September but only became available in stores earlier this month. Now iFixit has finally shared its traditional teardown to show what the new Apple Watch looks like inside. This time, the repair company has invited former Apple engineers to help them in the process.

The teardown of the Apple Watch Series 7 was conducted by Instrumental, a company created by former Apple engineers – and most of them worked on early Apple Watch designs. While Series 7 is not exactly a huge upgrade, there are some interesting differences between this year’s models and last year’s Series 6.

As usual, the display is glued to the body of the Apple Watch, so they had to heat it to 80°C to soften the adhesive. Looking inside, most of the components are in the same place as before, and with similar sizes. The new 45mm version has a slightly larger battery with 309mAh, while the 44mm Apple Watch Series 6 has a 303.8mAh battery.

However, iFixit notes that the gains in battery life are almost zero since Apple Watch Series 7 has a brighter display that consumes more power. You can check the exact specifications of the batteries below:

One noticeable change in this year’s models is the lack of the diagnostic port, which was previously placed between the battery and one of the watch band slots. Apple now uses a new 60.5GHz wireless connection for diagnostics, which could be a test for future portless iPhone models.

Of course, removing the diagnostics port ended up giving extra room for other components, something that is extremely important in such a compact device.

The biggest change in the Apple Watch Series 7 is the display, which is now larger and has smaller edges. Interestingly, iFixit says that the new display looks “less complex at first glance.” That’s because Apple now uses a touch-integrated OLED panel to reduce thickness.

Former Apple engineers believe that the main reason why Apple Watch Series 7 has been delayed and has been facing supply constraints is the new display.

The most likely culprit, by far, is manufacturing hiccups with this new display; screens have some of the most complex supply chains and assembly processes in the industry. The introduction of this new technology, combined with pushing the limits of the border design, likely caused delays in shipping the Series 7 to market.

This year’s Apple Watch is the first to be IP6X certified, which means the product is dust resistant. iFixit notes that the removal of the diagnostics port and a new speaker module with a redesigned grill helped Apple achieve such certification. There’s also the new S7 System-on-Chip (SoC), which keeps the same CPU as the Apple Watch Series 6.

In terms of repairability, iFixit was able to successfully replace the display and Taptic Engine without affecting any of the Apple Watch’s features. The company also managed to replace the battery, and Series 7 even works with a Series 6 battery – although this is not recommended.