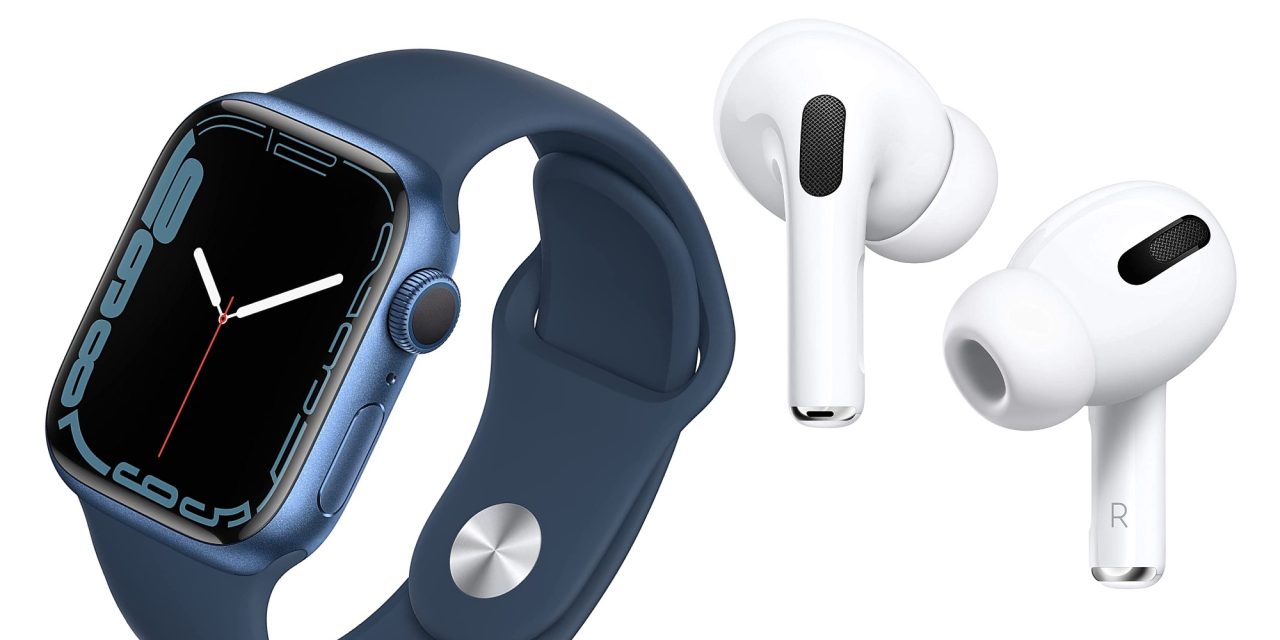 All of Tuesday’s best deals are up for the taking with new all-time lows on Apple Watch Series 7 leading the way. That’s alongside the Black Friday price on AirPods Pro at $159 and this Anker Thanksgiving week iPhone accessory sale from $12. Hit the jump for all that and more in the latest 9to5Toys Lunch Break.

Amazon is now discounting a selection of all-new Apple Watch Series 7 models, delivering some of the very first price cuts on the standard GPS aluminum styles. Starting at $380 for the 41mm sizes, these are new all-time lows at $19 off the going rate, and in most cases, the very first markdowns to begin with. Several different colors are available, as well.

As the latest fitness tracker to join the lineup, Apple Watch Series 7 arrives with some notable improvements over its predecessors. Headlined by the noticeably larger screen, there’s now added IP6X dust-resistance to pair with the usual fitness tracking features. There’s also a new fast charging mode that can deliver enough charge to wear overnight in just 8 minutes. Here’s how it compares to the previous-generation models as well.

It’s time to start checking off your friends’ or family’s Holiday wish list and Hyper’s got you covered with 30% OFF sitewide deals, and doorbusters. And to kick the season off right, you can get 35% off on Monday and Tuesday only. Just use code HYPER35 at checkout.

Black Friday pricing has now arrived on the all-new Apple AirPods Pro with MagSafe charging case. Dropping down to $159 at Walmart, you’re looking at the best price to date and quite the holiday-worthy price cut at $90 off the usual $249 price tag.

Delivering everything the original pair of Apple’s flagship earbuds did, the recently refreshed AirPods Pro pack ANC alongside a companion transparency mode, Spatial Audio support, and Hey Siri. Packed into the same form factor as before, the refreshed charging case will yield 24 hours of playback, but now supports MagSafe on top of its original Qi and Lightning options. Get all of the details in our launch coverage and then head below for more.

The Simply Mac Black Friday sale is on, offering savings of up to 50% on a whole range of Apple products and accessories – with child and adult Segway scooters thrown into the mix! If you’re looking for a new MacBook, the company not only saves you money on both low-end and high-end models, but it’s also offering a half-price HomePod mini with any Mac purchase.

Thanksgiving week has arrived, and Anker is celebrating by rolling out the largest collection of discounts across its lineup of chargers, power strips, projectors, and much more from $12. Via its official Amazon storefront, you’ll find the best prices of the year across several pages of discounts. A particular standout is the Anker PowerWave MagSafe Car Mount at $25. Normally fetching $36, you’re looking at the best price in several months only beaten once before.

As one of the latest additions to the lineup, the new Anker PowerWave Magnetic Car Mount delivers much of the expected MagSafe features in an on-the-road-ready package. Clicking into your car’s air vents, it’ll keep your iPhone 12 or 13 series handset in place for keeping an eye on navigation and the like, though there isn’t any passthrough charging. Get a closer look in our launch coverage.

Amazon is now offering Apple’s latest 13-inch M1 MacBook Air 256GB for $800. Typically fetching $999, you’re looking at the best discount in several months with today’s offer beating our previous mention by $49 with a total of $199 in savings overall. The elevated 512GB model is also seeing the a $149 discount, dropping to $1,100.

Apple’s latest MacBook Air delivers all of the performance gains of the M1 chip in its most portable form-factor with a lightweight build that’s centered around a 13-inch Retina display. Ideal for taking to class, the office, or just working from the couch, you’re looking at all-day battery life that pairs with two Thunderbolt ports, Wi-Fi 6 connectivity, and up to 512GB of storage that’s supplemented by 8GB of RAM. Get a better idea of its performance in our hands-on review.

Twelve South is launching its annual Black Friday sale today, taking as much as 58% off a collection of its in-house Apple accessories. Ranging from some of its most recent releases that just hit the scene this fall to some of its most popular cases, chargers, and other gear, our top pick is the Twelve South Leather MagSafe BookBook Case for iPhone 13 series handsets at $65. Marking the first discounts we’ve seen, this $5 discount arrives with some stylish leather detailing in tow alongside an all-time low.

Twelve South’s BookBook Case covers your iPhone 13 series device in full-grain leather with an overall appearance that turns your handset into a vintage book. The wallet folio can hold four IDs or cards and magnetically snaps onto the case that attached to your device.

Roborock deals up to 42% off

This Black Friday, you don’t have to break your budget to get an excellent robot vacuum and mop to keep your floors clean all year round. For a limited time, Roborock is offering as much as 42% off its best vacuums, with options perfect for all budgets and homes.