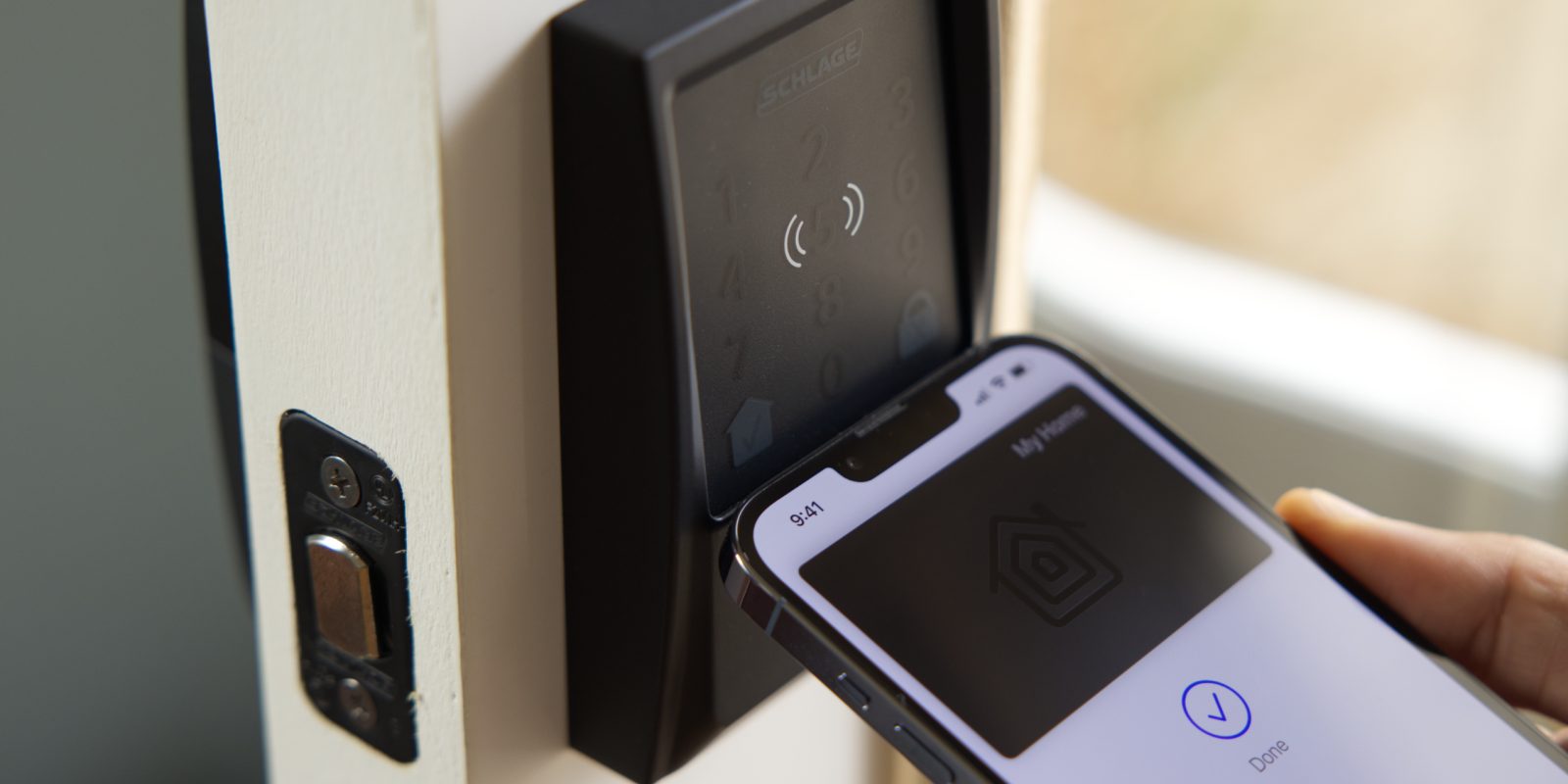 As first announced at WWDC 2021, iOS 15 evolves Apple Wallet to store keys for hotels, homes, and even cars. The Schlage Encode Plus is the first such consumer lock solution to take advantage of the NFC-powered Apple home key support.

As you’ll see in my hands-on video, home key is a great way to access your home with your iPhone or Apple Watch via just a tap. Let’s take a closer look at what the Schlage Encode Plus and Apple’s home key technology have to offer!

Schlage, founded in 1920, has a long history in the lock business, so it’s obviously above board when it comes to important areas like security and durability – it’s just a matter of taking its expertise in the lock business and adding in modern conveniences.

My Schlage Encode Plus is in the Century style, which makes for a fairly modern-looking design. In all there are three finish options including matte black, aged bronze, and satin nickel, as well as a more traditional Camelot design option at launch.

As someone who has installed a ton of smart locks for testing over the years, I can pretty much install a new lock in my sleep. As long as your door has the necessary cutouts — and the door is aligned properly when closed — installation should be a breeze. I had the Encode Plus installed in less than 10 minutes, and that includes removing my existing Yale Smart Lock.

Installation is just a matter of removing the existing lock, installing the dead bolt and strike plate, installing the touchscreen and corresponding backplate, connecting the cable, and securing the inside lock with thumb-turn.

That may sound like a lot, but it can be done in just a few minutes with nothing more than a Philips screwdriver. Trust me, I’m the furthest thing from a handy man, so if I can do this, you probably can, too.

Once all of the hardware is installed, you’ll need to add batteries to the battery holder, and slide the holder inside the lock. From there, it’s just a matter of initiating setup via NFC.

The Encode Plus supports HomeKit connectivity, which gives you the ability to control the lock using the Home app, HomeKit automations, and Siri voice control.

But it’s the home key support that separates the Schlage Encode Plus from its non-Plus version, and other smart locks on the market. Home Key adds the convenience and ease of use of NFC, which allows you to simply tap the lock with your iPhone or Apple Watch to lock your door. I must say that it’s quite delightful, and if you’ve ever used Apple Pay, then you’re pretty much familiar with how home key works.

Initial setup of HomeKit and home key is accomplished via NFC as well. Simply tap your iPhone to the NFC tag behind the inside cover after pressing the pairing button, and you’ll be prompted to set up your lock.

After you select your home, lock location, and name, you’ll be prompted to set up your home key to store in the Wallet app. Home keys normally require you to authenticate with Touch ID or Face ID, but you can enable Express Mode, which lets you unlock without needing to authenticate.

Finally, the setup process will prompt you to create access codes for residents and guests. For instance, if the dog walker needs to come through, you can assign them with their own guest code. These access codes can be entered on the lock’s physical touchscreen to gain entry into a residence.

Like all HomeKit-enabled products, you can utilize automations to do things like automatically turn on a porch light when the smart lock is unlocked, or automatically lock when a sensor learns that the door is closed.

While standard HomeKit works just like you would expect with the Schlage Encode Plus, the standout feature is home key support, especially when used with an Apple Watch. Home key support turns your Apple Watch into an NFC-enabled key that lets you simply tap to unlock your door. There are no buttons to press, no goofy Siri to misinterpret your request, or anything like that. If you can lift your wrist close to the Schlage Encode Plus, you can unlock your door.

Another great thing about Apple home key is that it supports the Power Reserve feature that was initially introduced in iOS 14 with Express Transit. Power Reserve remains active for up to five hours after your iPhone has died. Even if your iPhone runs out of power, you’ll still be able to unlock your door using home key for a limited time. And, of course, you can always rely on an access code, or unlock your door like an animal using a hardware key.

On the subject of battery life, the Schlage Encode Plus runs on four AAA batteries, and can last for nearly a year when configured solely using HomeKit. If you plan on often utilizing other network protocols, such as WiFi via the Schlage app, expect battery life to be lessened.

What if you lose your iPhone?

If you lose your home key-configured iPhone, you might be worried about someone gaining access to your residence via NFC, but worry not. If you enable Lost Mode via Find My, it will disable Apple Wallet access, which includes Apple home key. When you reunite with your iPhone and disable Lost Mode, home key becomes active again.

There are a few things that I would like to see Schlage improve with version two of the device, namely the ability to see if your lock is locked from a distance via an LED indicator. The Yale Assure SL has this feature, and I find it very handy for verifying that my door is locked while in the dark. I also wish that Schlage opted for a higher quality touchscreen keypad and backlight. It’s sufficient, but it’s not as good as the Yale.

I’d also like to see Apple flesh out HomeKit for locks to provide temporary and recurring access code support and access code history. Schlage’s own app has those features, but you cannot use them with HomeKit. Apple really needs to improve the HomeKit framework in this regard; make it possible to audit usage, provide virtual keys with temporary access, etc.

As you may know, I’ve been a big fan of the Yale Assure SL smart lock, so much so that I’ve purchased three of them and have used them for the last four years. But after using the Schlage Encode Plus, I can say, without a doubt, that it’s my new favorite smart lock.

The Schlage Encode Plus does it all. Not only does it work with HomeKit, which lets you unlock your lock with the Home app, via automations, or via Siri, but it also has a handy touchscreen, and it supports traditional keys as well. On top of all that, the Schlage Encode Plus is the first consumer lock with Apple home key support in tow. Because home key works via NFC, you can easily unlock your door with just a tap from your iPhone or Apple Watch — and it just works. If I ever decide to upgrade my locks, it will definitely be one with Apple home key support.

Details about Schlage Encode Plus availability have yet to fully materialize, but it’s due out sometime this spring for $299.99. Rest assured that we’ll follow up as soon as we know more, and I’ll also be sure to post about my long-term thoughts with the lock after some extended usage. In the meantime, let us know what you think about home key. Sound off down below in the comments with your thoughts.