Tesla refuses to adopt CarPlay, but there are third-party solutions (and more on the way) 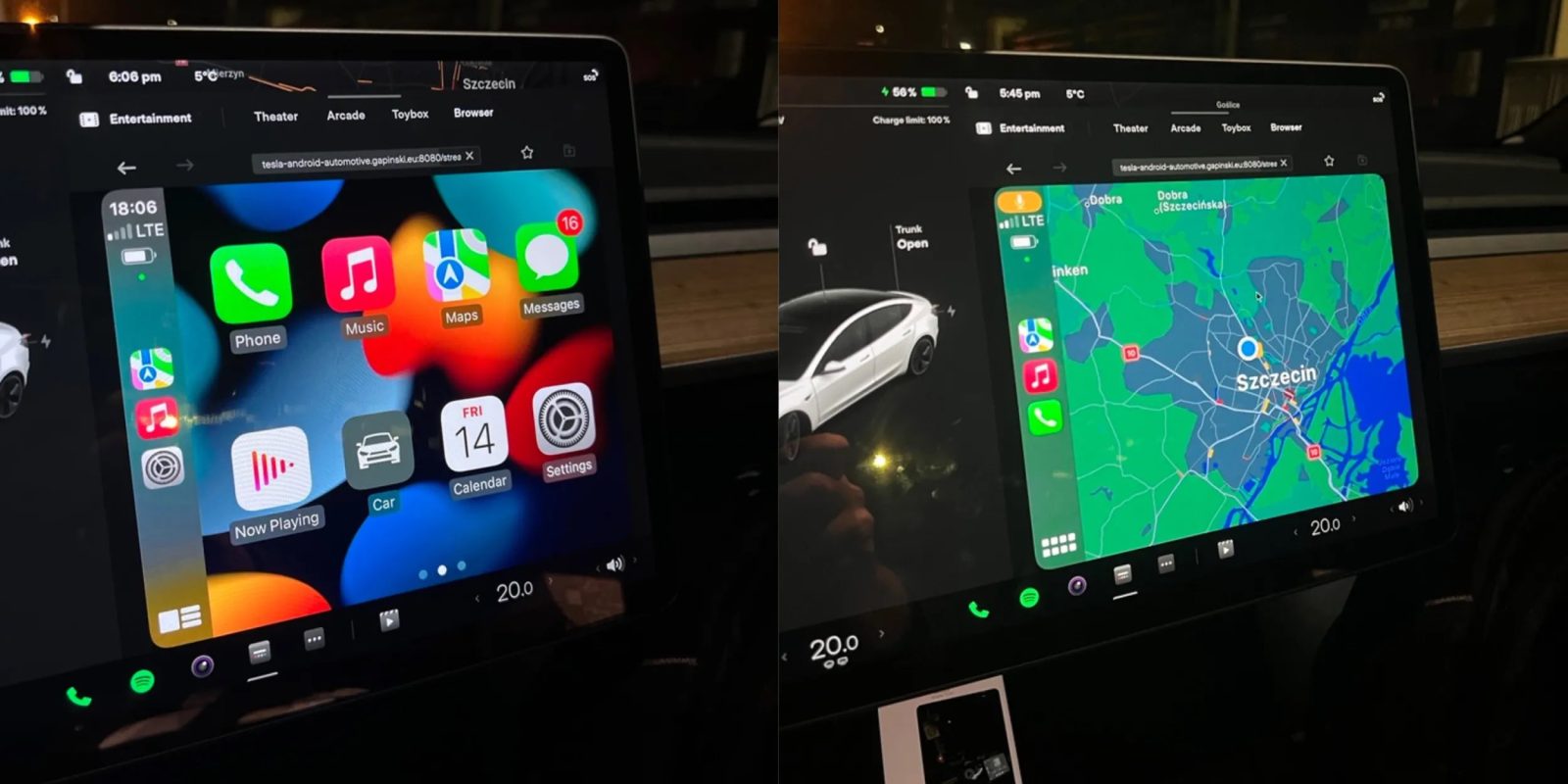 Tesla’s resistance to adding CarPlay is no secret, and there’s absolutely no indication it’s something the company is working on adding. Earlier this year, we covered a workaround that brought CarPlay to Tesla cars, and now it’s available for anyone to try… as long as you’re willing to jump through some major hoops.

There are also a few other third-party options. Head below for the details.

Use CarPlay in your Tesla… sort of

Developer Michał Gapiński has been working on this project for a long time. He shared a first look at the efforts earlier this year, showing how features like steering wheel controls, Apple Music support, and more were already supported. Gapiński’s latest update on the project shows how far it’s come, and it’s now available for you to try.

This hacky workaround is driven by a Raspberry Pi running a custom version of Android; the full suite of hardware includes another Raspberry Pi running Linux, which handles the video and networking capabilities. You’ll also need a micro-HDMI to HDMI cable and Ethernet cable to handle the video out of the Android Raspberry Pi and connect the two boards together.

Gapiński also notes there’s some other optional hardware you can add to further improve the set up:

Once you have all of the hardware, the actual software experience of using CarPlay is powered by the in-car browser that’s available on Tesla cars. You connect to the Raspberry Pi using the browser, then load up the CarPlay interface right on the Tesla’s display (via Tesla North).

Despite running in the Tesla browser, the CarPlay experience is fully functional. You can use CarPlay apps like Apple Music, Apple Maps, Google Maps, and more. You can even use the steering wheel button to control playback and use the full experience while driving.

You can get started with this hacky CarPlay and Tesla workaround by heading to Gapiński’s website right here. It’s not a “download and get up and running in minutes” solution, but it’s an option as Tesla continues to refuse to add native CarPlay support.

But looking to the future, an easier “plug and play” solution for bringing CarPlay to your Tesla could be on the way. Alpine is one of the most popular companies that makes aftermarket head units with wired and wireless CarPlay support – the company offers a wide selection of head units with CarPlay support, but none of them are designed for Tesla vehicles.

That being said, we’ve heard rumors that the company is actively working on solutions for Tesla cars that would theoretically bring CarPlay support. More details are unclear, but were told by a source that the company currently has its Alpine F#1 Status audio system running in a 2018 Tesla Model S, and is looking at more EV integration options.

9to5Mac’s Take (and other options)

With this Raspberry Pi system and efforts from companies like Alpine, it’s clear that most users aren’t going to let Tesla’s refusal to add native CarPlay support stop them. In fact, one of the more popular solutions thus far is this Intellidash Pro standalone head unit, which features wireless CarPlay support.

The Intellidash Pro device (full review) simply attaches to your car’s dash and brings the full CarPlay experience to any vehicle, regardless of the car’s built-in head unit. There are even other solutions designed specifically for Tesla’s Model 3 and Model Y cars with displays that go behind the steering wheel where you’d usually find a traditional instrument cluster.

It seems unlikely that Tesla itself will ever cave in and offer native CarPlay support in its vehicles. The company is keen on controlling the entire in-car experience, even as many owners call for CarPlay support. Notably, Tesla doesn’t even support Apple Music integration, despite offering integration with Spotify and TIDAL services.

Code found within Tesla’s operating system indicated that it was, at one point, working on Apple Music integration. That integration, however, has not yet actually come to fruition.