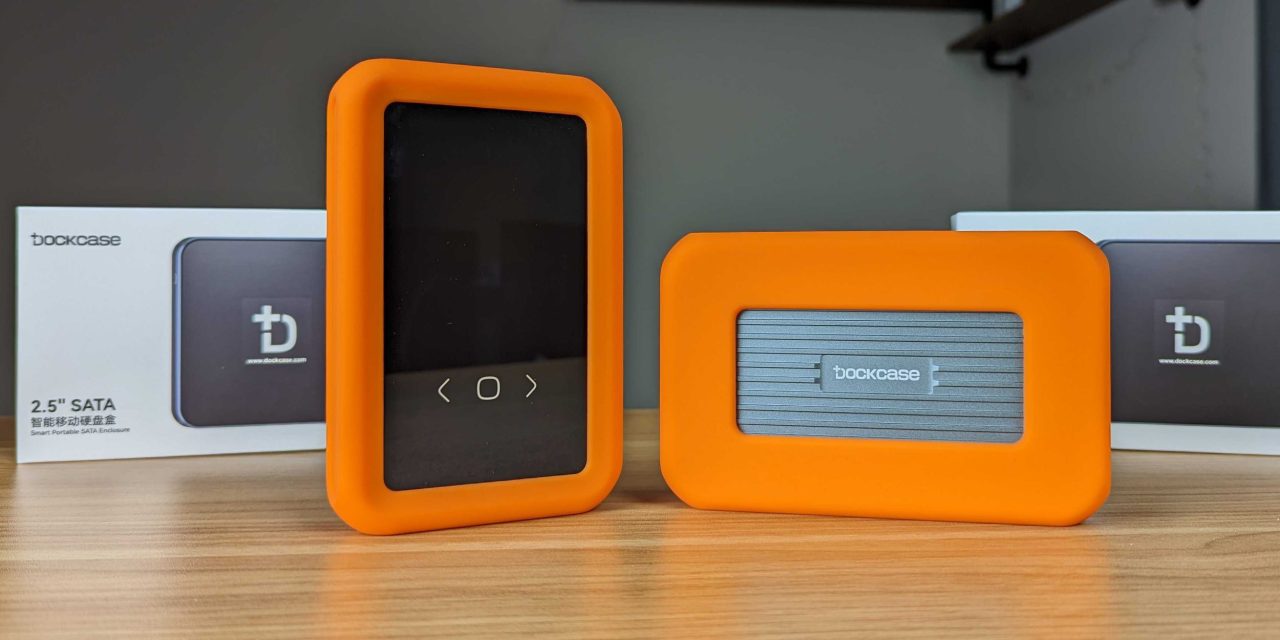 DockCase, best known for their integrated MacBook hubs and cases, has returned with a new external USB-C enclosure for SSDs. They previously launched an enclosure for M.2 drives, but their latest two enclosures are made for the larger 2.5 inch drives to accommodate SSDs or even traditional mechanical hard drives.

As always, I want to start off with my usual Kickstarter warning. I have covered DockCase’s products a few times before, and they’re an established company with a history of delivering their products, but they are still launching the product on Kickstarter. As such, it will take much longer to ship than buying one of their existing products on Amazon.

With that out of the way – the product itself!

The new 2.5″ drive enclosure follows in line with the other “smart” accessories that they have launched before. Rather than just being an enclosure you throw a drive in and forget about, DockCase’s 2.5″ enclosure offers a small screen and capacitive buttons to allow you to get more information about your drive.

The smart trend first arrived with some of their hubs, allowing you to see which devices where plugged into which ports. With the SSD enclosure it allows you to see your drive’s partitions, temperature and exact input voltage, the status of the power-loss protection, and the SMART status of your drive. This includes your drive power-on hours, power cycles, estimated remaining life, number of unsafe shutdowns, and the amount of data written to/ read from the device. This SMART information is something often lost when using drives in external enclosures, and it can be a good indicator of your drives lifespan to help you prevent data-loss.

I’ve found this implementation to be better than the one on their M.2 enclosure, as rather than trying to move through the information with a single small button, the three capacitive buttons on the front make it easy to navigate through the screens.

Given that this is an enclosure for 2.5″ SATA drives, the enclosure won’t be able to deliver the highest speeds possible from some USB-C SSD’s made specifically for the task. It’s limited to the speed of that SATA interface – but it can still deliver over 500MB/s with the right drive.

If your main goal is to get the highest performance possible in an external drive, you’re better off going with a Thunderbolt enclosure and an NVMe drive. But if you have a 2.5″ drive you’re no longer using, picking up an enclosure is a great way to get more life out of it. There is the main USB-C connection, which for SSDs is all you need, and there is a second USB-C port that can be used to provide additional power for more power-hungry HDDs.

One of their big features of the enclosure is the power loss protection. Just like their M.2 enclosure, it has a capacitor to help provide a bit of power to the drive for a few seconds after it’s unplugged. This is intended to allow the drive to clear any data in its cache and get it successfully written to the storage to prevent loss or corruption of data.

Both of them have the same metal and glass design we’ve seen from DockCase’s previous products. There are also optional silicon cases for the enclosure to provide a bit of protection from drops.

At a discounted Kickstarter starting price of around $70, it’s a bit of a hard sell. If all you need is an external enclosure for your drive, you can pick up alternatives from the likes of Sabrent or SSK for less that $20. If the SMART features and quality build of DockCase’s enclosure are appealing to you, there’s just less than a week left in their Kickstarter to back the product – which has almost reached ten times its goal.