MacBook Pro comparison: How the new M2 Pro/Max improves over the M1 versions 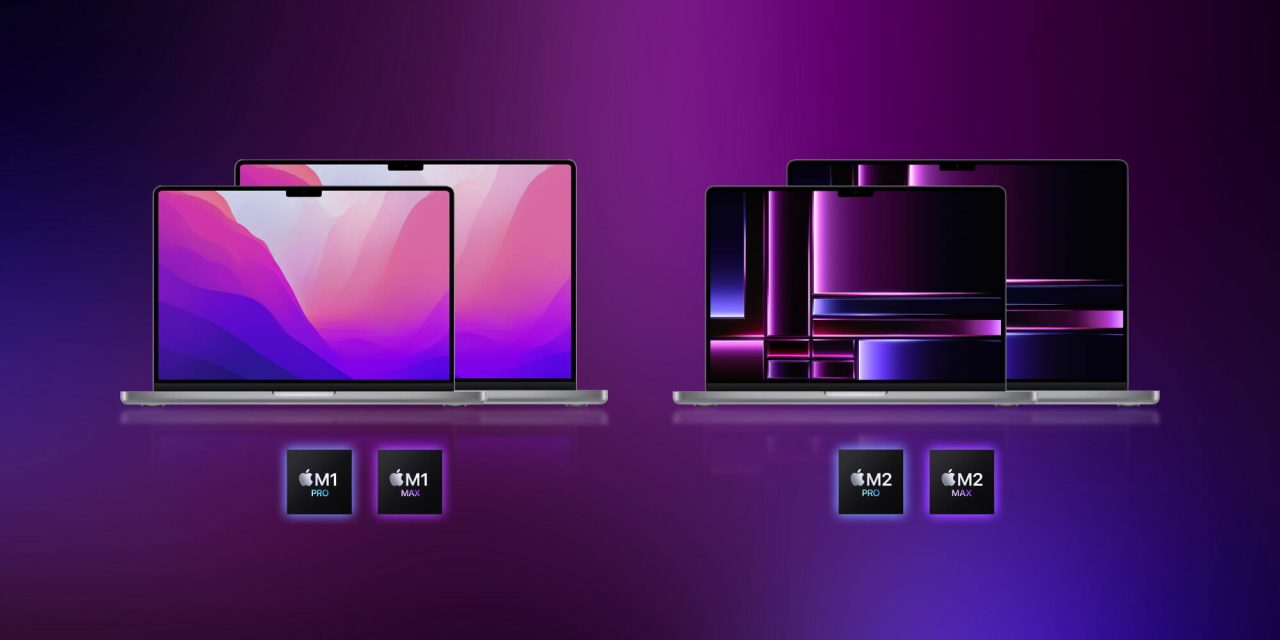 Apple has launched its next-generation MacBook Pro laptops powered by the new M2 Pro and M2 Max custom silicon. Along with a more powerful CPU and GPU, the new MacBook Pro machines support up to 96GB RAM, Wi-Fi 6E, 8K output via HDMI, and more. Read on for our in-depth M2 Pro/Max MacBook Pro comparison for how everything stacks up against its predecessors.

Apple overhauled its MacBook Pro laptops in late 2021 with the M1 Pro and M1 Max chips. That brought RAM up to 64GB, CPUs with up to 10 cores, and GPUs with up to 32 cores. Other additions were a 1080p webcam, Liquid Retina XDR Display with mini-LED backlighting, an updated I/O array with HDMI, SD, and MagSafe returning.

Note – the 13″ MacBook Pro updated with the M2 chip in 2022 is most comparable to the M2 MacBook Air rather than these MacBook Pro machines.

Let’s get into all the differences between the M2 Pro/Max MacBook Pro and the M1 versions!

Apple says the M2 Pro gives 20% faster CPU and 30% faster GPU performance than the M1 Pro. And the M2 Pro neural engine has seen a 40% speed increase over its predecessor.

For the M2 Max, Apple says the same 20, 30, and 40% performance improvements apply when compared to the M1 Max for CPU, GPU, and neural engine.

Apple says the new media engine has “twice the ProRes support to dramatically accelerate media playback and transcoding.” The new M2 Max chip continues to include two video encode engines like Apple did with the M1 Max.

A major advancement for the 2021 MacBook Pro notebooks was the Liquid Retina XDR Display. It features double the sustained brightness via mini-LED backlighting, ProMotion with up to 120Hz refresh rates, an increased resolution/pixel per inch density, and greatly reduced bezels.

The new MacBook Pros come with a notch at the top center of the display for the 1080p FaceTime camera just like the 2021 models.

Unfortunately, Face ID has not arrived with the M2 MacBook Pro machines.

The M2 MacBook Pro features almost all the same ports with the same layout as the M1 MacBook Pro. That includes an HDMI port, SDXC card reader, and MagSafe (officially called MagSafe 3). There are also 3 Thunderbolt 4/USB-C 4 ports.

But M2 Pro and M2 Max do take external display support a bit further with an upgrade from the HDMI 2.0 to 2.1 port that supports up to 8K output at 60Hz. That also allows for multichannel audio output.

Correction: The chart below for the external display row was updated to reflect accurate details.

Physical dimensions are the same between the 2023 and 2021 MacBook Pro laptops. And Apple is still making the computers in two finishes: silver and space gray.

Here’s the full breakdown of size and weight:

Both the 14 and 16″ M2 MacBook Pro laptops feature 1 hour longer battery life for video playback and wireless web use as compared with their predecessors.

Like the 2021 MacBook Pro models, the new MacBook Pro machines can fast charge which gives up to 50% battery in just 30 minutes.

Prices for the base and middle-level standard configurations from Apple remain the same. However, custom builds with up to 96GB RAM and slightly different GPU core choices mean the M2 MacBook Pro machines can cost up to $6,499.

The M2 Pro and M2 Max MacBook Pro laptops certainly offer some notable upgrades, but naturally, they aren’t as impressive as the jump from Apple’s Intel MacBook Pro to M1 Pro/Max models were.

If you’re a creative pro or other professional who needs the latest and greatest from Apple, the upgrade may be worth it. The new MacBook Pros will also be great for those who are coming from an Intel MacBook.

However, for anyone who already has an M1 Pro/Max MacBook Pro and/or doesn’t have workflows that necessitate the absolute fastest performance, passing on these new releases may make the most sense.

For those on the fence about which M2 MacBook Pro specs to go with, remember that you can get the same 10 or 12-core processor with the M2 Pro and M2 Max. The big difference you’re paying for is the extra GPU power including the more capable media engine and increased external display support with the M2 Max chip builds.

When it comes to RAM (unified memory), if you have medium to heavy workflows and/or plan to keep your new MacBook Pro for some years, going with 32GB or more will likely be worth the $400+ upgrade.

You can find the new MacBook Pro at Apple, Amazon, Best Buy, and more.

Thanks for checking out our MacBook Pro comparison!