I Took a Leaf From Apple’s Tree Or: How I Learned To Stop Worrying and Love Solar Power

Having been impressed with Apple’s investment in renewable energy over the recent years, this summer I decided to see if I could follow their example and power my Apple devices entirely from solar power. Considering the 1 billion+ iOS devices in usage around the world and how much energy is required to recharge them every day, charging my four iOS devices from renewable energy may only be a drop in the ocean but I suppose every journey starts with a single step.

Below is a list of the Apple devices I own and planned to charge this way:

As with any device that charges via USB, all of these can easily be charged by solar power just as quickly as if you plugged them into the power brick included in the box.

One of the main concerns I had with changing to this method was if I would be able to generate enough power for all of my devices. Living in the U.K. the weather is known more for its rainy days than sunny skies. Fortunately my house has an un-obscured south-facing flat roof, so this is an ideal spot for locating my solar panels.

I’ve been using two different systems to generate and store the energy required for this project; a 20Watt off the shelf small commercial system and another 100Watt custom built setup. These figures relate to the size of the solar panel used, not the exact amount of power available, I’ll leave the details of the actual products at the bottom of the page. Essentially they both work the same way; a solar panel captures sunlight and converts this to electrical energy, which is then stored in a battery for later usage. Think of the system like a mini Tesla Powerwall. 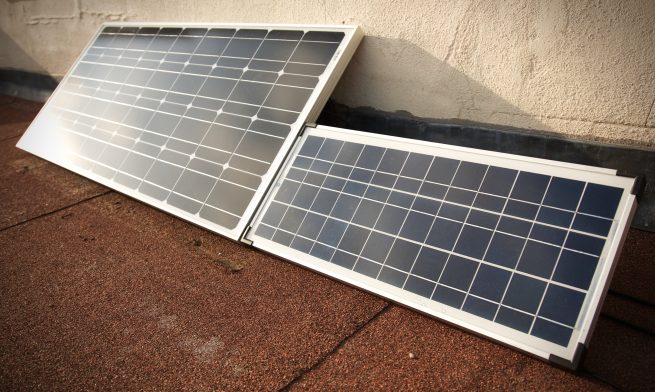 This allows me to charge my devices using two different methods; directly from the sun while plugged into these systems and the most convenient method for everyday use was to pre-charge several portable USB power banks, which allows me the flexibility to replenish my iPhone, AirPods and iPads whenever and wherever I like. I keep some of these USB power banks around the house for re-charging at home and others come out and about with me while I’m at work.

Think of this system in the same way an AirPod case works with the AirPods – you have a larger battery, ready to top-up a smaller battery. Ideally the bigger battery has the capacity to charge your device several times. This gives some leeway when it comes to charging, so you don’t use the battery once and then find, if you forgot to recharge it, there is nothing left for subsequent charges and you’re stuck with no power. You can top up small amounts throughout the day, or just do a bulk charge at your convenience. Whatever your circumstances, there is a method which should work for however you spend your day. As long as you don’t forget to bring a USB powerbank!

I’ve found the easiest way to keep these USB batteries charged and ready to go, is to either put them on charge overnight from the solar system battery before I go to bed, or first thing in the morning before I head out for the day. That way when you wake up in the morning or get home from work, you should find a fully charged battery ready and waiting to recharge your devices. The cost of lithium batteries has dropped considerably in the last few years, so stocking up on a few USB powerbanks to suit your needs should not be an extravagant cost, especially compared with the cost of an iPhone or iPad.

Using larger USB powerbanks, in the range from 10,000mAh to 26,800mAh allows me to charge my devices several times. For comparison the battery in an iPhone 7 Plus is rated at 2900mAh and the 12.9” iPad Pro is rated at 10,307mAh. There are losses in the conversion process between all these batteries and devices, so you cannot expect to get 100% efficiency.

When it comes to usage and living with this method of recharging I have found that it is actually more convenient than using the standard power brick provided, as I can plug my iPhone into a USB powerbank to begin charging and still have the freedom to pick it up and walk around the house without being tethered by a cable plugged into the wall. Also when I’ve been in a rush and had to leave in a hurry but my phone battery is low, it’s not a problem, I just grab a battery and cable and charge on the go.

For safety and reliability I stick to using either Apple’s original lightning cables, or ones certified by the MFi program, along with brand name USB powerbanks. I would hate to destroy one of my devices simply by using a bad cable or battery. 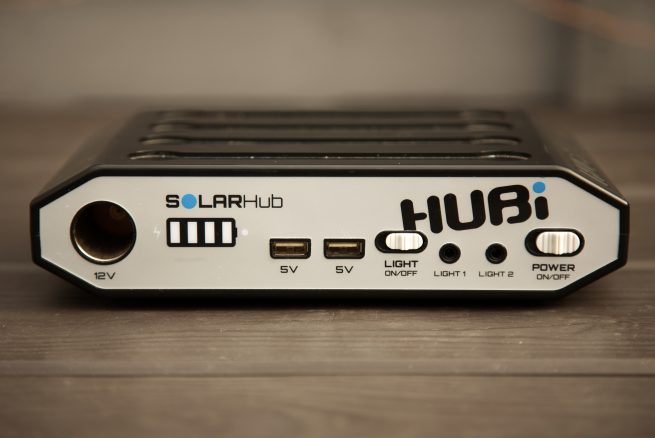 Thankfully when it comes to the actual process of charging from the solar systems, there is abundant array of devices to choose from. This is because all of these systems revolve around one thing: standard 12V car outlets. You can use a single, double or even 4-port car USB charger which can directly charge your Apple devices or USB powerbanks. I just plug the car USB adapters into the 12V socket in my solar system and use the appropriate lightning or micro USB cable.

Most devices rely on a standard 5V USB connection for charging. This varies from a basic 1Amp 5Watt brick that comes with your iPhone to a 2.4amp 12Watt brick for iPads. Recently however, a new faster method has begun to be implemented. The iPad Pro (10.5”, 12.9” 1st & 2nd gen) and latest iPhones (8, 8+ & X) allows for a new fast charging standard which relies on USB-C Power Delivery (PD). This can charge at higher voltages up to 29Watts of power, which means charging times are much quicker than that of the standard 12Watt charger which comes in the box. The new iPhones quote a 50% charge in 30 minutes.

Using this method substantially reduces the amount of time required to charge not only the iPad Pro but also the 29,000mAh USB-C power bank I own. Using the normal USB method would approximately take a whole day to charge either my iPad Pro or the large USB-C powerbank but with the USB-C PD method, this is reduced to around 4-6hrs. The latest iPhones and USB-C based MacBooks can also be charged this way, but for the purposes of this article I’ll mainly be concentrating on the devices I own, as listed above. Please be aware the 13” and 15” MacBook Pro laptops require more than 29W of power to recharge and would not be able to fully powered using the methods I describe here.

Due to the early nature of USB-C PD charging, the range of devices to choose from at the moment is fairly limited but as things progress this will resolve itself over time, especially as the new iPhones now support this standard, which I believe will speed up this process.

Thankfully this will also work with the new wireless Qi charging built into the new iPhones, as all you need to do is plug the Qi pad into a USB powerbank instead of a standard USB power brick.

I setup both solar panels on a flat roof on my house and ran the cables in through a window to the battery charging stations. This is ok for the summer when the weather is warm, but I may have to think of something more permanent when it comes to winter time and the temperature begins to drop. For those of you concerned about security, my window can lock with a gap which allows enough space for the cables, while still being secure so I don’t have to leave the house without unplugging everything which would defeat the purpose of the solar charging during the day. 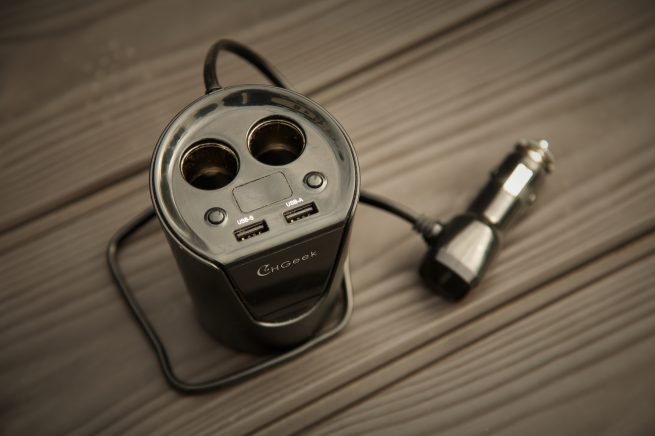 Overall I’ve been impressed with how well this system worked and the added convenience  portable charging. Regardless of how good or bad the weather has been I’ve always found there is enough power for all of my devices and even other USB accessories I use. One of the benefits of USB charging is that it is not tied into one system. Anything you can plug into a USB socket to charge, can be powered by this system. Of course your mileage may vary with this as the location of the solar panels, if they get obscured during the day and the size of the main battery pack used will all make a difference to how well this works. It will also depend on how many devices you need to charge and how often. Conveniently both of the setups I use can easily be expanded by adding additional battery packs and solar panels.

Ideally I’d love to have a grid-connected solar installation on my house, but I do not have a large enough roof, living in a small Victorian London terraced house. It may be small scale but it has been great to think I am running my own mini solar power station. Even my kids got in on the act and enjoyed charging their devices from the solar setup.

However, soon the real test is coming up. I live in the UK and Winter Is Coming! 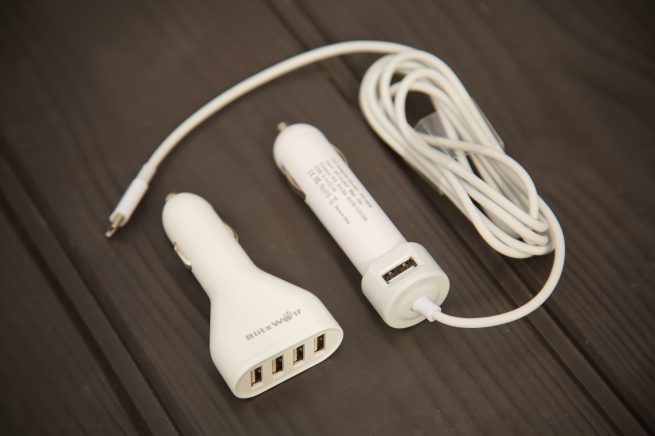