Review: LifeProof Nüüd is just the right amount of protection for your iPhone 5/5s 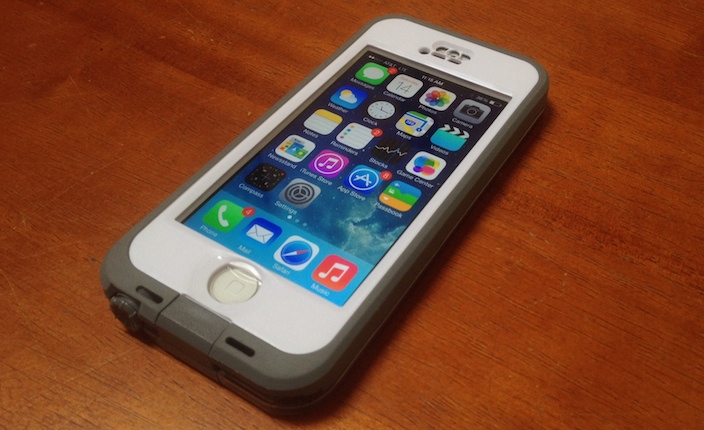 This case has been around for a while, and frankly, I’ve always been a no-case kind of guy. But when I found myself not being as careful with my now almost two-year old iPhone 5, I thought that maybe I should just go all the way. Maybe I should get ahold of one of the more protective cases out there, without going off the deep end and getting something would provide more protection than I need.

What I ended up with is one LifeProof Nüüd for the iPhone 5/5s. It’s not a new concept, but these cases claim to do a great job of protecting your device from all the potential hazards in life: from dirt and mud, to a pool full of water. But this isn’t a product description, it’s a review. After a week of using this nifty case, I think I have some worthwhile thoughts on it. My phone is typically all-nude all-the-time, so forcing myself to use a case for the first time this week left me with some thoughts.

Apple does a great job of making sure the experience people have with their products starts with the packaging, and LifeProof makes an attempt at the same. Opening the product presents you with a card that outlines the quick and easy steps of installation, and every case comes shipped with a microfiber cloth for cleaning the device’s screen. You’ll also get a small headphone cable extender which lets the device stay waterproof with headphones attached.

But something that’s unique about the Nüüd case is that LifeProof even includes a dummy iPhone for testing to make sure the case is truly water proof. The company tests every case themselves prior to shipping, but it makes sense that they would provide a way for customers to test and make sure the case lives up to its bold claims. Other LifeProof models don’t need to include this dummy, because they are completely closed-off and you can test them by simply dunking the case in water for 30 minutes, opening it up, and making sure the inside is dry.

The Nüüd model actually leaves the entire front face open, letting you touch the screen itself even when the case is on. For me, this is one of the case’s biggest high points, and one of the biggest gripes I’ve had about previous super-protective cases. I have never used a screen protector — I don’t like anything getting between my finger and the capacitive touch sensor because, when something does, the screen often loses accuracy in terms of detecting taps.

Giving the case the dunk test in the kitchen sink was a slightly more scary experience than it would have been with a fully-enclosed case like the LifeProof Frē, because the water truly does in fact touch the phone’s front glass and you have to trust that the seal is tight enough to keep water out. But after I got over my gut telling me not to do it, dropping the phone in 4 inches of water for 30 minutes left it running perfectly fine. You can’t really control the phone when it’s under water, and using the phone when the screen is wet triggers a ton of sporadic taps, but that’s the nature of the capacitive screen and not on the fault of the case.

As someone who never used a case previous to this one, I still found the bulk of this case to be just a bit much. My gripes about wanting to be able to interact with the devices actual screen are remedied with the Nüüd, and it definitely has a slimmer profile than most of LifeProof and Otterbox’s many offerings, but it was hard to keep the phone in my pocket — especially as a relatively skinny dude who wears slimmer-profile jeans.

Overall, I’m actually very happy with this case. It’s a little bit bulky, but as I definitely want to sell my iPhone 5 sometime in the next few months so I can grab the iPhone 6, it’s probably best that I protect this device as much as I can to preserve its value. I’ve enjoyed being able to use my iPhone for the last week without worrying about drops and bumps, and I don’t have to sacrifice being able to touch the screen directly with this case. And to boot, it has a relatively slim profile that gives me just the right amount of protection with the fewest number of compromises.

If you’re sporting the iPhone 5s, which also works with this case, Touch ID should work perfectly fine (but I obviously was unable to test this).

You can get the LifeProof Nüüd at the company’s official website, or on Amazon for the same price. If you’re looking for the same profile but in iPad flavors, be sure to check out our hands-on with the iPad Nüüd.