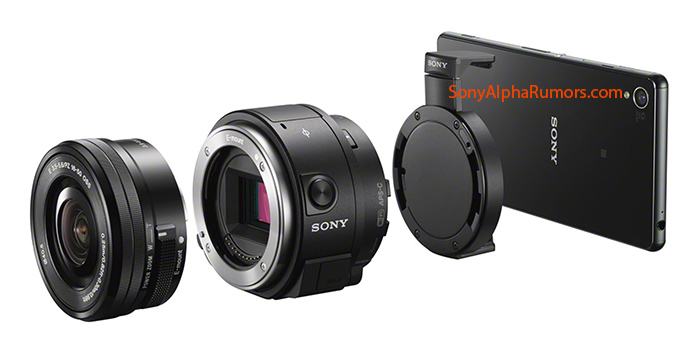 Sony is about to announce a new product in its QX camera accessory lineup that will make your smartphone compatible with any of its E-Mount lenses usually reserved for its line of NEX camcorders and mirrorless shooters. The report comes from the often reliable SonyAlphaRumors blog, which also shared the image above and below:

These are the first pictures of the ILCE-QX1 E-mount camera. The third QX camera after the QX10 and QX100 (here one Bay). But unlike the other two this hasn’t a fixed lens but is an E-mount module. It has an APS-C sensor (not sure yet but should have the same great A6000 24MP sensor with fast af), built-in flash

When Sony introduced its QX accessory for smartphones last year, there were mixed reviews on whether or not the lens-style camera attachment would catch on with consumers, but many praised the product despite not loving its original $300-$500 price point (which has since come down). More than just a lens attachment for your Android device or iPhone, the lens built in NFC, WiFi, battery, memory and a back-illuminated 18MP 1/2.3” Exmor R® CMOS sensor. This time around Sony is going ditch the fixed lens and let the accessory play nice with any of its E-Mount lenses, which could be a big draw for users that are already invested in the ecosystem.

Sony is expected to unveil the device during its IFA event in Berlin tomorrow on September 3. The new QX accessory will reportedly sell for 300 Euro for the body only and 450 Euro with a 16-50mm lens. The two current models are now selling for around $135 and $335 for the higher end model on Amazon. Update: Current model is now on sale for $84 shipped.