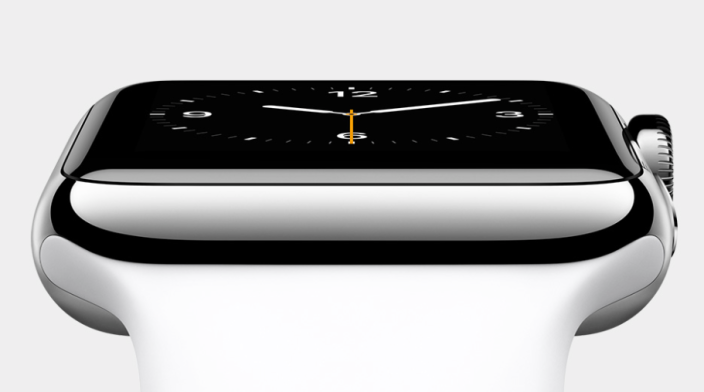 Apple just unveiled its much rumored wearable product live on stage during its press event this morning giving us a first look at its entrance into the smartwatch market. The device is officially called Apple Watch, pairs with iPhone, and sports an all-new user interface that is quite a departure from anything we’ve seen on other iOS devices.

It’s driven Apple from the beginning. This compulsion to take incredibly powerful technology, and make it accessible, relevant, and ultimately, personal.”– Jony Ive

Perhaps the biggest surprise on the Apple Watch is that Apple is using a traditional watch dial on the side of the device as an input mechanism for navigating the device. That “Digital Crown” allows you to scroll, zoom, and navigate through the device without obscuring the display like a touchscreen smartwatch. The crown also acts as the device’s Home button. While Apple is focusing on using the Digital Crown dial for navigation, the device is capable of detecting touch input on the display and includes haptic feedback capabilities with a “Taptic Engine” feature. In addition, Apple Watch detects when users lift their wrists to activate the display. Here’s a look at the Apple Watch home screen: The screen is a Retina display that Apple notes is “laminated to a single crystal of sapphire, the hardest transparent material after diamond.” Other specs in Apple Watch include a gyroscope and accelerometer, while GPS functionality comes from a wirelessly-connected iPhone. Apple also said it’s including infrared and visible-light LEDs, along with photosensors that will detect pulse rate and other data. Apple didn’t go over specifics for battery life but did note it’s using an inductive wireless charging solution pictured in the gallery below.

Apple showed off a few of Apple Watch’s stock apps during the event including things you’d expect, like music control for a connected iOS device or Mac, notifications (with haptic feedback), and the ability to swap out watch faces. Haptic feedback plays into interesting new messaging features that let users tap and draw to communicate. For instance, the feature lets users capture and send their heartbeat to one another.

It also showed off integration with iOS devices and Mac to curate content that appears on the device, for example, favoriting photos on other devices make them available to view on Apple Watch. Apple also demoed navigation on the device with walking directions that use haptic feedback to notify users for turn-by-turn directions: As expected, fitness is also a big part of the Apple Watch software with dedicated Fitness and Workout apps that include features for tracking fitness metrics and sharing that data with the Health app in iOS 8. The device also works with the company’s new Apple Pay payment solution.

Apple is making the device open to third-party developers as well (many of which have already created experiences) through an SDK for developers. Apple noted a few apps today including BMW, Pinterest, Facebook, MLB, Honeywell, Nike, and others that are already developing apps for Apple Watch.

Apple Watch will start at $350. Full details on pricing and availability are here.

CUPERTINO, California—September 9, 2014—Apple® today unveiled Apple Watch™—its most personal device ever—featuring revolutionary new technologies and a pioneering user interface with a beautiful design that honors the rich tradition of precision watchmaking. Apple Watch introduces a specially designed and engineered Digital Crown that provides an innovative way to scroll, zoom and navigate. The Digital Crown is Apple’s most revolutionary navigation tool since the iPod® Click Wheel and iPhone® Multi-Touch™. Apple Watch will enable you to communicate in new ways right from your wrist by sending and receiving messages, answering calls to your iPhone, and with Digital Touch, sending something as personal as your own heartbeat. Apple Watch also introduces comprehensive health and fitness apps that can help people lead healthier lives. Apple Watch is available in three distinct collections—Apple Watch, Apple Watch Sport and Apple Watch Edition.

“Apple introduced the world to several category-defining products, the Mac, iPod, iPhone and iPad,” said Tim Cook, Apple’s CEO. “And once again Apple is poised to captivate the world with a revolutionary product that can enrich people’s lives. It’s the most personal product we’ve ever made.”

Apple Watch introduces a revolutionary design and iOS-based user interface created specifically for a smaller device. Apple Watch features the Digital Crown, an innovative way to scroll, zoom and navigate fluidly, without obstructing the display. The Digital Crown also serves as the Home button and a convenient way to access Siri®. The Retina® display on Apple Watch features Force Touch, a technology that senses the difference between a tap and a press, providing a new way to quickly and easily access controls within apps. Apple Watch introduces the Taptic Engine and a built-in speaker that together discreetly enable an entirely new vocabulary of alerts and notifications you can both hear and feel. Apple custom-designed its own S1 SiP (System in Package) to miniaturize an entire computer architecture onto a single chip. Apple Watch also features Wi-Fi 802.11b/g and Bluetooth 4.0 to pair seamlessly with your iPhone.

Apple Watch is an extremely accurate timepiece that’s also customizable for personal expression. Apple Watch comes with 11 watch faces ranging from traditional analog faces to new faces like the dynamic Timelapse face; the Astronomy face with its interactive, real-time 3D model of the earth, sun, moon and planets; and the Solar face, a contemporary sundial. Apple Watch can be personalized in appearance and capability with additional information such as upcoming events, moonphases or your activity level, enabling millions of possible configurations.

Taking advantage of its location on your wrist, Apple Watch provides timely information that can be viewed at a glance. Smart Replies and dictation let you respond quickly to messages, and with Handoff, you can start a message on your Apple Watch and continue where you left off on your iPhone. Swipe up from the watch face for Glances that quickly show you information you care about, such as your current location, stocks or your next meeting. Pressing the side button brings up Friends, a view of your favorite people, so you can contact them quickly and easily. Digital Touch allows you to send a sketch, a gentle tap, an audio message through Walkie Talkie or even your own heartbeat. Apple Watch lets you interact quickly and conveniently with the world around you, so you can pay for coffee using Apple Pay™,* board a plane with a Passbook® boarding pass, control your Apple TV® or get directions.

Apple Watch includes a groundbreaking Activity app designed to help motivate you to be more active throughout the day, and an all-new Workout app designed to provide the metrics you need during dedicated workout sessions. Apple Watch uses the accelerometer, a built-in heart rate sensor, GPS and Wi-Fi from your iPhone to provide a comprehensive picture of your daily activity. The Activity app measures three separate aspects of movement: calories burned, brisk activity and how often you stand up during the day. The Workout app provides goal-setting and pacing during popular session-based workouts, such as running and cycling. The companion Fitness app on iPhone collects your activity data so you can see your activity history in greater detail. Apple Watch uses this history to suggest personal, realistic goals, reward fitness milestones and keep you motivated.

Pricing & Availability Apple Watch will be available in three collections. Apple Watch, with a polished or space black stainless steel case and a choice of straps; Apple Watch Sport, with a space gray or silver anodized aluminum case and Sport Band; and Apple Watch Edition, with an 18-karat rose or yellow gold case and a choice of straps exclusive to this collection. Apple Watch straps include the Sport Band in black, blue, green, pink and white; the Classic Buckle in black and midnight blue; the Leather Loop in bright blue, light brown and stone; the Modern Buckle in midnight blue, brown, soft pink, rose gray and bright red; the Milanese Loop in stainless steel; and the Link Bracelet in brushed stainless steel and polished space black. Apple Watch will be available in early 2015 starting at $349 (US). Apple Watch is compatible with iPhone 5, iPhone 5c, iPhone 5s, iPhone 6 or iPhone 6 Plus running the latest version of iOS 8.

* Apple Pay is only available in the US.