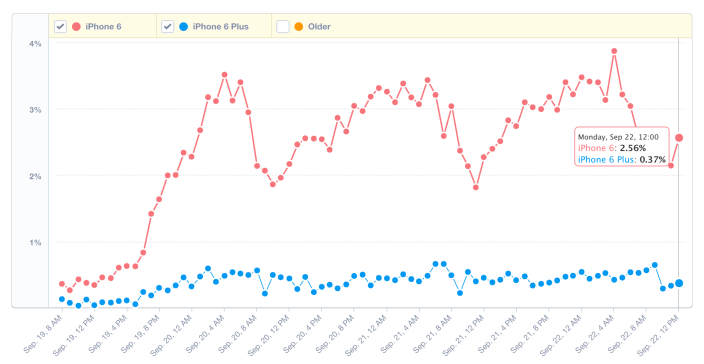 Fiksu and Mixpanel also offered data on iPhone 6 vs iPhone 6 Plus adoption following the first weekend of sales. Both show that iPhone 6 is outpacing iPhone 6 Plus quite significantly after the first few days in customers’ hands, but it’s quite likely that could be due to a much tighter supply of iPhone 6 Plus.

The Wall Street Journal reported in the days leading up to the iPhone’s retail launch on Friday that Apple was producing significantly less iPhone 6 Plus models than iPhone 6, and availability of the iPhone 6 Plus seemed to generally be in shorter supply with most retailers including Apple. That could account for why both Fiksu and Mixpanel are showing 6 adoption outpacing 6 Plus after the first few days. Currently, Fiksu shows the iPhone 6 at approximately 1.7% of users, while the 6 Plus comes in at just 0.3%. Compare that to 0.61% for iPhone 5s and 0.24% for iPhone 5c from last year’s launch.

Numbers from Mixpanel show a similar situation with iPhone 6 at 2.5% of its users vs 0.4% for 6 Plus. It’s possible, however, we could see the gap close as iPhone 6 Plus becomes more readily available.

Apple announced earlier today that it sold a record 10 million iPhone 6 and 6 Plus units during its first weekend of sales, but it has not yet released official numbers on iOS 8 adoption.