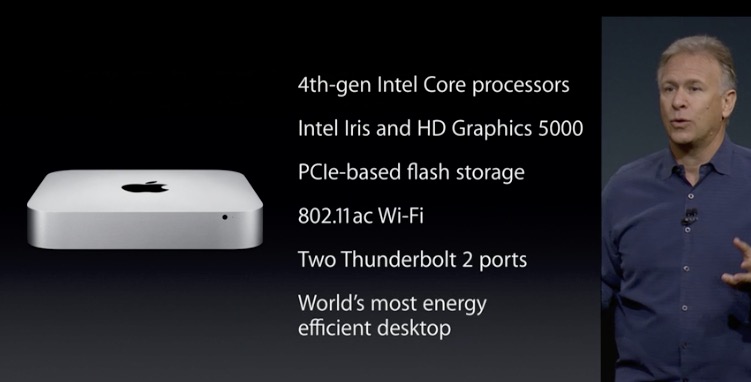 Apple has just announced an update to it’s Mac mini desktop PC that features all-new internals and a lower starting price. The CPU has been bumped to the current fourth-generation of Intel’s Core processors paired with Intel Iris and HD Graphics 5000 graphics processors. It now sports PCIe-based flash storage, though the exact amount of storage wasn’t mentioned.

The computer’s connectivity has also gotten a bump with 802.11ac Wi-Fi and the addition of two Thunderbolt 2 i/o ports. The tweaked internals have also afforded the new Mac mini the title of “world’s most energy efficient desktop.”

The upgraded machine will be available today at a reduced starting price of only $499.

The new Mac mini delivers new levels of graphics performance, expandability and connectivity. New integrated Intel HD Graphics 5000 and Intel Iris Graphics deliver up to 90 percent faster graphics performance than the previous generation.* Mac mini now includes two Thunderbolt 2 ports, each delivering up to 20Gbps of bandwidth to each port, as well as next-generation 802.11ac Wi-Fi that is up to three times faster when connected to an 802.11ac base station. Mac mini is still the world’s most energy efficient desktop, exceeding Energy Star 6.1 requirements by seven times the standard and consuming as few as 6 watts of power at idle.**

Every new Mac comes with Mac OS® X Yosemite, a powerful new version of OS X®, redesigned and refined with a fresh, modern look, powerful new apps and amazing new Continuity features that make working across your Mac and iOS devices more fluid than ever.

iMovie®, GarageBand® and the suite of iWork® apps come free with every new Mac. iMovie lets you easily create beautiful movies, and you can use GarageBand to make new music or learn to play piano or guitar. iWork productivity apps, Pages®, Numbers® and Keynote®, make it easy to create, edit and share stunning documents, spreadsheets and presentations. iWork has been redesigned with a new look, support for iCloud Drive℠ and a host of new features, including a new comments view in Pages. iWork for iCloud® beta lets you create your document on iPad®, edit it on your Mac and collaborate with friends, even if they’re on a PC.

Customers can choose to configure their Mac mini with up to a 3.0 GHz dual-core Intel Core i7 processor, up to 16GB of memory, and up to a 1TB  PCIe-based flash drive. Additional technical specifications, configure-to-order options and accessories are available online at www.apple.com/mac-mini.