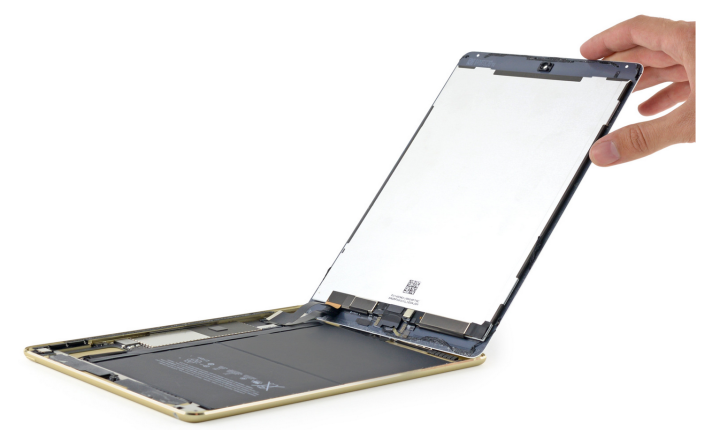 With iPad Air 2 units now officially arriving in the hands of customers, our friends over at iFixit have officially kicked off their ritual teardown of the device. For the most part the teardown only revealed minor changes on the inside, such as repositioned display cables that iFixit calls a welcomed changed for repairs.

Also revealed are minor tweaks to Wi-Fi antennas and other components. In addition, the teardown confirms an approximately 15% smaller battery compared to the previous generation iPad Air…

The newly-bonded front panel is more rigid than in previous iPad models, and therefore feels a bit sturdier to pry against—however, flexing the glass still disturbs the LCD, even when you aren’t inserting the pick very deeply. That being the case, the glued-down display remains the iPad’s only access point, so there’s still a risk of damaging it even when performing ordinary repairs.

Inside the iPad Air 2 is an NFC chip similar to the iPhone 6 and 6 Plus models, but we’ve confirmed with sources it is for use as the Secure Element in Apple Pay for in-app purchases only on the new iPads.

iFixit used a Wi-Fi only model of the new iPad Air 2, so it couldn’t comment on positioning of cellular components in relation to the repositioned Wi-Fi antennas.

The teardown shows a 7340 mAh battery (27.3-watt-hour), which as expected is smaller than the 8827 mAh (32.9 WH) battery it found in the previous generation Air. Several reviews of the Air 2 noticed a reduced battery life over the first generation iPad Air in real world use, but Apple quoted the same 10-hour battery life for the new iPad. It shouldn’t come as much of a surprise, however: The first iPad Air also had a smaller battery than the iPad model before it, which often goes hand in hand with a much slimmer design.

Components found in the teardown that aren’t disclosed by Apple include:

The teardown is still in progress at iFixit.