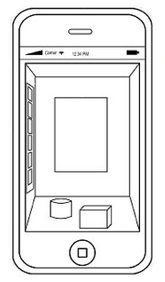 According to a report from Chinese newspaper Economic Daily News citing supply chain sources (via UDN), Apple is working on a 3D iPhone display of sorts that doesn’t require the use of special glasses. The translated report also claims Apple is actively developing 3D “software ecosystems.”

The report adds that Apple will be looking to move from its current in-cell display technology, which reportedly won’t be compatible with the new 3D technology, to new panels likely supplied by partner TPK.

It wouldn’t be the first time a smartphone manufacturer attempted to bring a 3D-style interface to a smartphone. Android manufacturers have attempted to implement similar features. The most recent example being Amazon’s Fire Phone that includes 3D interface elements with gesture-based controls. It also wouldn’t be the first piece of evidence that Apple is working on such a technology, as it has filed patents in the past detailing new 3D GUI concepts and touch-free, motion sensing gestures (pictured above).

Whether or not this is something Apple actually has in the cards for an upcoming device remains to be seen, but today’s report claims TPK is planning fund-raising as a result of new orders from Apple.