Although Apple has said that the Apple Watch will need to be charged nightly, the company has not disclosed any details on how long the wearable’s battery will last. For the first time, people with knowledge of the Apple Watch’s development have provided us with the specific performance targets Apple wants to achieve for the Apple Watch battery, but the actual numbers may fall short of those targets.

According to our sources, Apple opted to use a relatively powerful processor and high-quality screen for the Apple Watch, both of which contribute to significant power drain. Running a stripped-down version of iOS codenamed SkiHill, the Apple S1 chip inside the Apple Watch is surprisingly close in performance to the version of Apple’s A5 processor found inside the current-generation iPod touch, while the Retina-class color display is capable of updating at a fluid 60 frames per second.

Apple initially wanted the Apple Watch battery to provide roughly one full day of usage, mixing a comparatively small amount of active use with a larger amount of passive use. As of 2014, Apple wanted the Watch to provide roughly 2.5 to 4 hours of active application use versus 19 hours of combined active/passive use, 3 days of pure standby time, or 4 days if left in a sleeping mode. Sources, however, say that Apple will only likely achieve approximately 2-3 days in either the standby or low-power modes…

Apple has also been stress-testing the Apple Watch’s battery life with pre-bundled and third-party applications. Our sources say that Apple is targeting 2.5 hours of “heavy” application use, such as processor-intensive gameplay, or 3.5 hours of standard app use. Interestingly, Apple expects to see better battery life when using the Watch’s fitness tracking software, which is targeted for nearly 4 hours of straight exercise tracking on a single charge.

As Apple is positioning the Apple Watch as a timepiece, the company has conducted numerous tests to determine how long it can run purely in time-keeping modes. We’re told that the Watch should be able to display its clock face for approximately three hours, including watch ticking animations, if nothing else is done with the device. However, it’s unlikely that most people would actually keep the Apple Watch clock face turned on for even three hours straight in a single day. When the Watch screen is not in use, the display is powered off, and the clock demands much less energy.

Considered separately, the active use app, clock, and fitness numbers sound very low, but the reality is that people will passively wear the Apple Watch for most of the day, actively interacting with it only for short periods of time. That’s why the Watch will be able to last the average user roughly a day on a single charge. We’re told that Apple has been shooting for roughly 19 hours of mixed usage each day, but that the company may not hit that number in the first generation version.

Sources tell us that battery life has remained a source of concern for Apple over the past year, and was a contributing factor for Apple pushing back the retail launch from an originally planned late 2014 to early 2015. To test real-world performance in a variety of conditions, the company has circulated a surprisingly large number of test units of the Watch: nearly 3,000 are said to be currently roaming around, mostly the stainless steel variant. 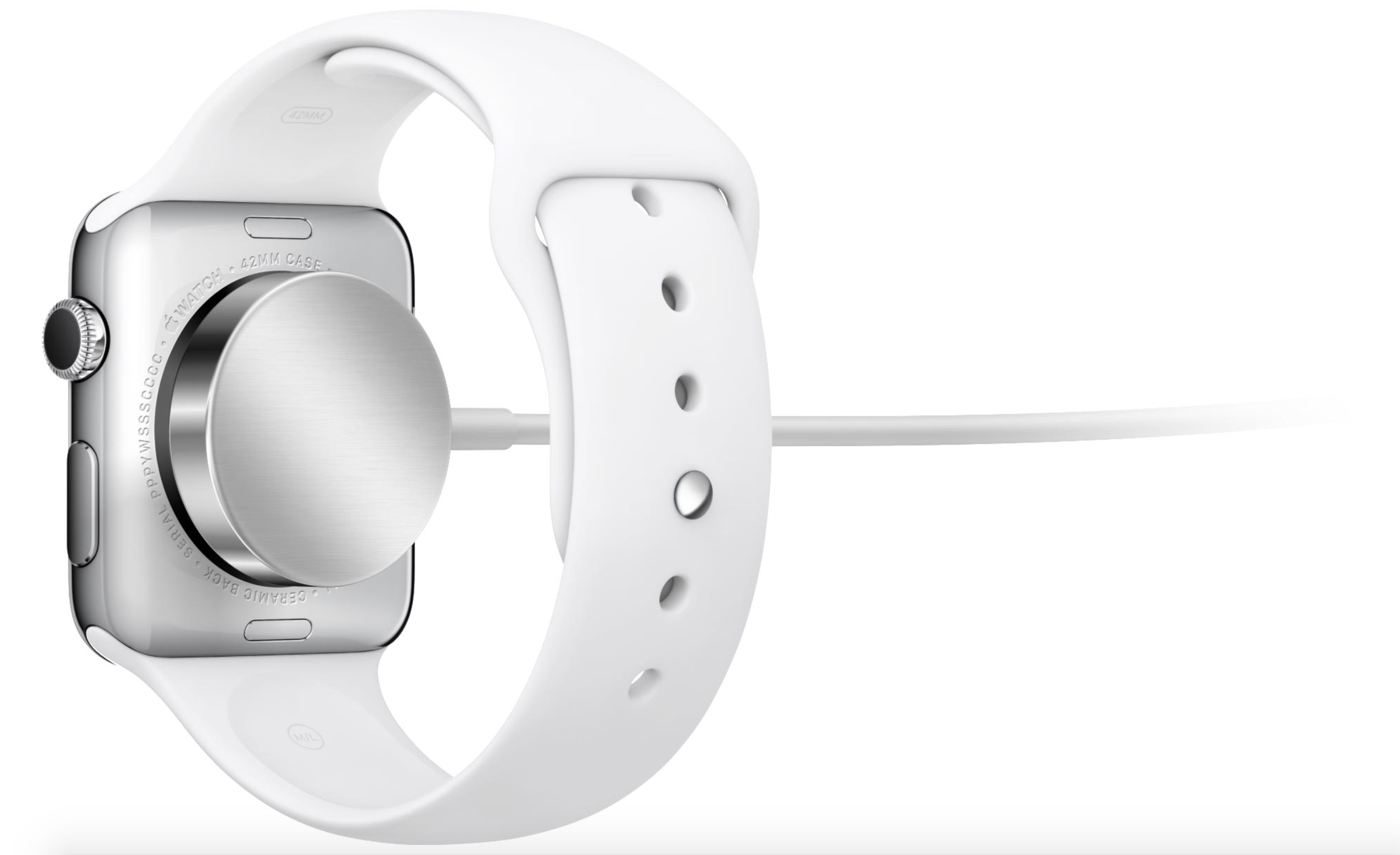 Apple has also been working to perfect the MagSafe-based inductive charging mechanism for the Watch, which sources indicate was responsible for slower-than-expected recharging times that hopefully will be fixed in time for the product’s release. The company has developed both plastic and stainless steel versions of the circular charger, potentially one for the $349 aluminum and plastic Apple Watch Sport, and the other for the higher-end models. It’s unclear at this point whether the company will sell multiple versions of the charger, as Apple has only shown the metal variant, though the Apple Watch Edition is said to ship with a special box and charging dock that may incorporate the stainless steel MagSafe connector.

As of earlier this month, the Apple Watch is on track to ship by the end of March. We previously detailed how the Watch will integrate with the iPhone via an iOS 8.2-based Companion application.