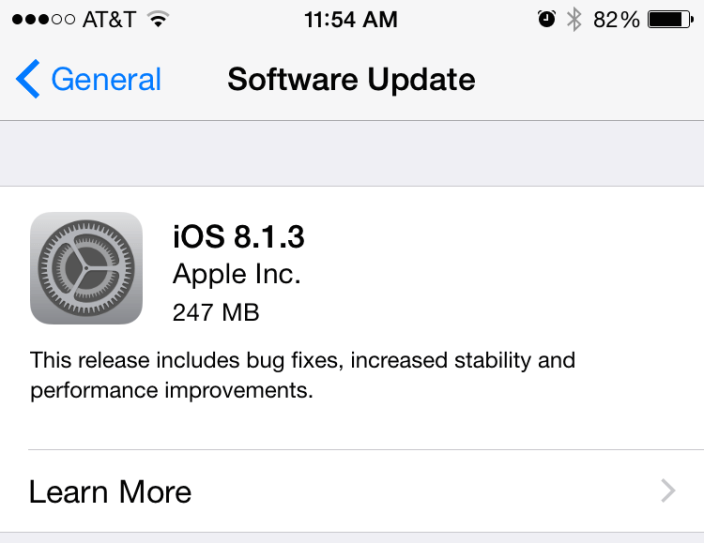 Apple released the iOS 8.1.3 software update for iPhone, iPad, and iPod touch users today. The update is available over-the-air through the Software Update section of the Settings app. The update includes the usual bug fixes and performances improvements, and notably claims to reduce the amount of free storage required to perform the update.

Apple first released iOS 8 in September near the launch of the iPhone 6 and iPhone 6 Plus, and iOS 8.1 added support for Apple Pay in late October. Since then Apple released iOS 8.1.1 in November, which focused on improving performance for iPhone 4s and iPad 2 users, and iOS 8.1.2 in December, which included bug fixes and a fix for missing ringtones.

Today’s software update release is available for all devices running iOS 8 including:

The mention of reducing the amount of space required to update over-the-air addresses a common issue users have. iOS 8 adoption has been noticeably slower than iOS 7 adoption the year prior with adoption sitting under 70% according to Apple. In practice, iOS 8 users with as little as 600MB are reporting being able to update, while iOS 7 users are reporting more than 3GB being required to update over-the-air.

Apple is also testing iOS 8.2 for release later this year to support communication between the iPhone and the upcoming Apple Watch. Several test builds of the beta software has already been released to developers in order to test WatchKit and build apps for the Apple Watch. Notable changes coming include new descriptions of categories in the iOS 8 Health app as well as a ‘Companion’ iPhone app for pairing and managing the Apple Watch. 9to5Mac detailed the upcoming app and its functionality earlier this month.