Apple stock closed at an all-time high today ending trading at $119.56 per share after climbing past its previous trading high of $120 per share to 120.51 per share during morning trading. The price also exceeds Apple’s previous opening record high of $119.27 per share setting that record up to be broken as well.

The company previously set a record high for closing on November 26, 2014, when it ended trading at $119.00 even. That record was set shortly after the company crossed $700 billion in market capitalization at the time.

Apple’s recent record stock growth followed first the introduction of the iPhone 6 and iPhone 6 Plus alongside the reveal of the Apple Watch in September, then a record breaking quarter with over $74 billion in revenue reported over the holidays with more than 74 million iPhones sold.

Meanwhile, the Apple Watch has yet the hit the market, although Apple CEO Tim Cook last said to expect it in April as the company previously only described the launch as happening in ‘early 2015’. Earlier today, a report surfaced claiming the company would hold an event for the Apple Watch and 12-inch MacBook later this month, although 9to5Mac has since learned from sources that no such event for this month is in the works.

In initial after hours trading, Apple shares are down around 0.15%. 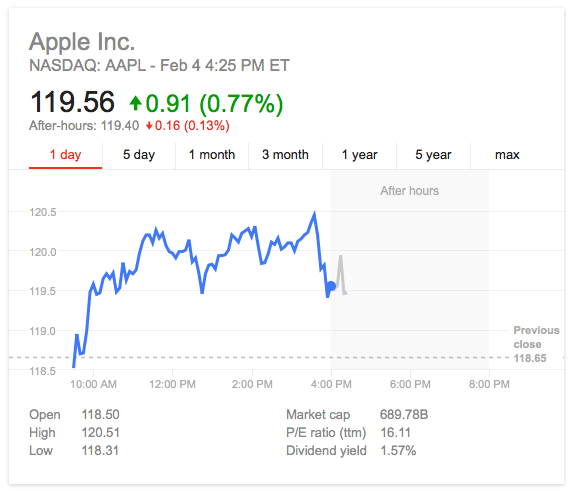