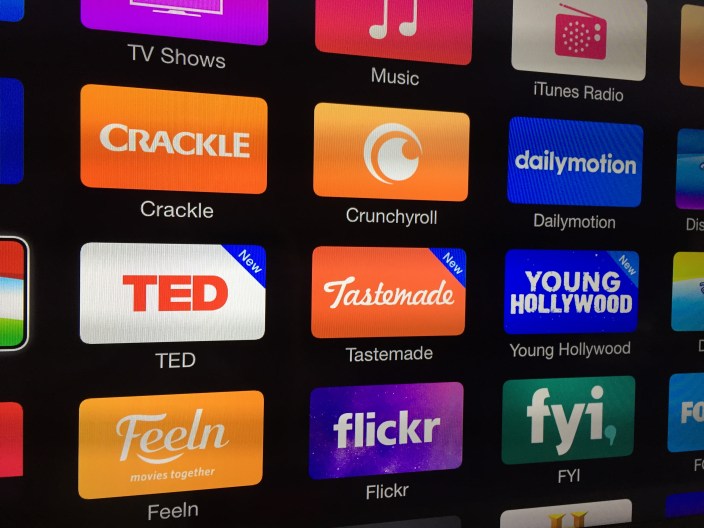 Shortly after dropping the price from $99 to $69, Apple has updated the Apple TV channel lineup with a few additions in the United States. New apps for viewing content from TED, Tastemade, and Young Hollywood are now available. The channels should appear automatically or after a restart on the latest Apple TV set-top box, and all three offerings are available without a cable or satellite subscription.

The refresh does not yet include the new HBO NOW offering, which will enable Apple TV owners to subscribe to the premium network as a standalone service similar to Netflix starting next month.

The new TED channel brings TED Talks to the Apple TV featuring hundreds of videos of interesting lectures from people of all backgrounds. The channel is organized by the front page which has a rather custom design compared to other Apple TV channels (not unlike the latest YouTube refresh), a Talks section for browsing by category, and a playlist section for viewing pre-built sets of TED Talks videos. Users can link existing TED accounts to the new Apple TV channel. TED also has a free iPhone and iPad app for viewing content on the go.

As the name suggests, the new Tastemade channel features content devoted to food and cooking. The channel is rather simple featuring cooking shows and the ability to browse content by major cities. Content is available to view for free. Tastemade is described as “the first 100% digital food and travel lifestyle network.” Tastemade has a newly launched iPhone and iPad app as well.

Additionally, Apple has added Netflix to Australia and New Zealand now that the streaming service is available in those countries.

As always, you can hide any of the new or existing channels (except the top row) by navigating to Settings > Main Menu > and clicking each channel to ‘hide’ the icon from your main view. The update brings the total channels available in the US to 60 not including iTunes, Home Sharing, and Settings apps.