Of the 11 percent of teenagers who plan to purchase an Apple Watch, the style and design of the device are the two biggest motivators. Fitness tracking, which Apple touts as one of the key features of the Watch, is a motive for less than half of teenage Apple Watch customers. Currently, just 5 percent of teenagers own a smartwatch, according to the survey.

While teen interest in the Watch has decreased, the latest Piper Jaffray data also shows that the iPhone and iPad are still the most popular smartphone and tablet among the crowd. 66 percent of the surveyed teens own an iPhone, while 64 percent own an iPad. These numbers are down from 67 percent and 66 percent respectively in October survey, however. 72 percent of teens expect their next smartphone to be an iPhone, while 60 percent expect their next tablet to be an iPad. 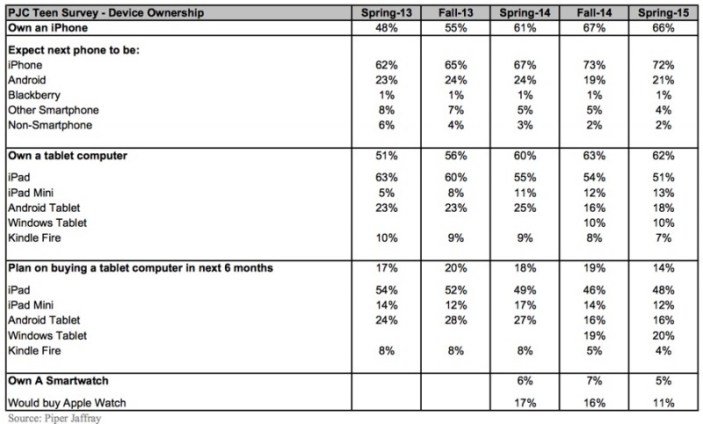 Apple has been taking steps to increase Watch interest among the general public by placing it on the wrists of celebrities such as Katy Perry, Drake, Sam Smith, and Pharrell. All of the celebrities have posted something about the device on social media, with Sam Smith being the latest. Although Smith referred to the device as the Iwatch…