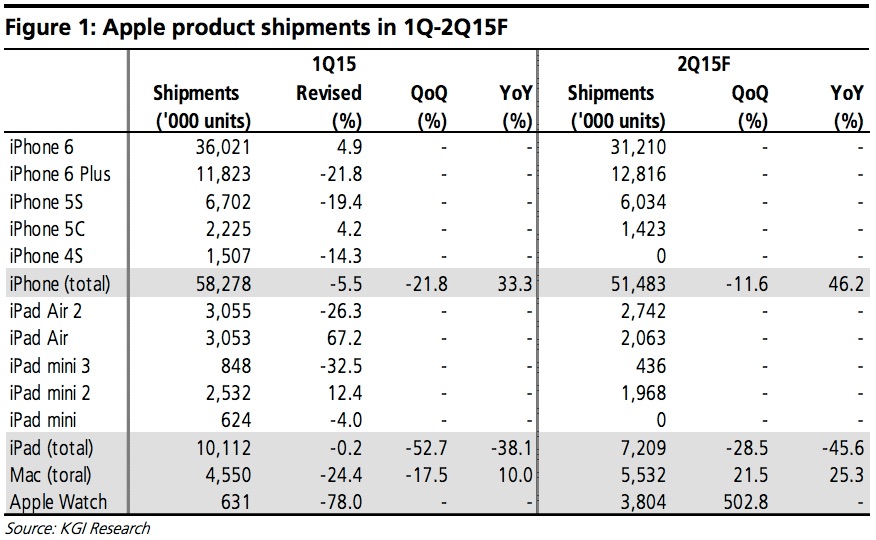 KGI’s Ming-Chi Kuo, one of the few analysts we feel credible, has his Apple numbers ready for Q1 2015. The analyst projects iPhone, iPad, and Mac shipments to be 58.2 million, 10.1 million, and 4.5 million respectively. He also estimates that Apple Watch shipments are currently at 631,000 units.

Kuo believes that iPhone shipments have peaked and that Apple will see a quarter over quarter decline of 21.8 percent in Q1 and an 11.6 percent quarter over quarter decline in Q2 for shipments of 51.4 million, which would still represent a record quarter for the company. The morale of the story here is that Apple is still selling a lot of phones and there’s no need to worry yet.

iPhone shipments have peaked. We estimate iPhone shipments to decline 21.8% QoQ to 58.2mn units in 1Q15, milder than the seasonal pattern. While we look for QoQ decline of 11.6% to 51.4mn units for 2Q15, still better than seasonality, we believe shipments doesn’t just mean market demand but also partly represents pulled-in 3Q15 orders from Apple. Coupled with slowing shipments from the peak, we are neutral on iPhone supply chain shares.

Regarding the Mac, Kuo says it will be an area of significant growth for Apple. For Q1, Kuo estimates shipments of 4.5 million units, which is a quarter over quarter decline of 17.5 percent. Heading into Q2, however, the analyst predicts a 21.5 percent increase to 5.5 million thanks to the new 12-inch MacBook and back to school demand.

We see a positive outlook for Mac. We look for QoQ decline of 17.5% to 4.5mn units for Mac shipments in 1Q15 and 21.5% QoQ growth to 5.5mn units in 2Q15 on new product attraction and back-to-school demand. We are positive on Mac supply chain shares on stronger shipments momentum than the PC sector average.

Apple is set to hold its quarterly earnings call on April 27th.