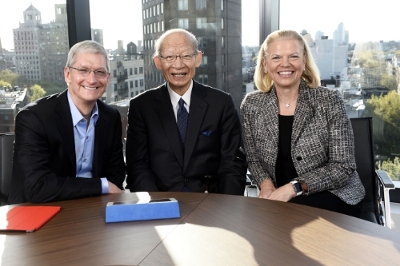 A low-tech scheme where postal workers from Japan Post check-in on how elderly residents are doing is about to go hi-tech with the help of iPads, reports the WSJ. The pilot scheme – one of the fruits of the Apple/IBM partnership – will see Japan Post hand out free iPads to 1,000 older citizens to allow closer and more frequent checks.

“By handing iPads to the elderly, we can closely check in on them more often—not only confirming if they are doing fine but also making sure that they are not involved in any trouble like a scam targeting the elderly,” a Japan Post official said on Thursday.

Data from the iPads will be analyzed by IBM’s Watson computer, reports Nikkei …

The aim is to turn the project into a commercial service, where those concerned about their elderly relatives can pay a small monthly fee for the monitoring. The existing low-tech service costs Y1,000 ($8.40) per month.

IBM said today at a press conference that the goal is to reach 4-5 million customers by 2020, providing a handy boost to flagging iPad sales.

Apple has since released an official press release detailing the initiative:

TOKYO, ARMONK, New York and CUPERTINO, California—April 30, 2015—Japan Post Group, IBM and Apple® today announced a first-of-its-kind initiative aimed at improving the quality of life for millions of Japanese senior citizens. Built on the global partnership Apple and IBM announced last year, the new initiative will deliver iPads with IBM-developed apps and analytics to connect millions of seniors with services, healthcare, community and their families.

After piloting iPads and apps custom developed for the elderly, Japan Post Group will expand the service in stages with the objective of including 4 million to 5 million customers in Japan by 2020.

Today more than 33 million seniors make up about 25 percent of Japan’s population, projected to grow to 40 percent over the next 40 years.*

“We are joining with two of the world’s most respected leaders in technology to bring our elderly generation into the connected world, expand our businesses by deepening relationships, and discover new ways to strengthen the fabric of our society and economy,” said Taizo Nishimuro, CEO of Japan Post Group.

The initiative includes: iPad® and its intuitive built-in apps, capabilities and features including FaceTime®, Messages, Mail, Photos and iCloud® Photo Sharing, along with access to rich content in the App Store℠, iTunes Store® and iBooks Store℠. iOS 8, offering award-winning accessibility features, including settings for low vision and hearing impaired users. Custom-built apps specifically for the elderly by IBM Global Business Services for reminders and alerts about medications, exercise and diet, along with direct access to community activities and supporting services such as grocery shopping and job matching. Exclusive cloud services of the IBM MobileFirst for iOS platform, for data integration and security, analytics, and management of millions of devices; along with systems integration services and training for Japan Post Group employees. Pioneering text analytics and accessibility technologies, many invented in IBM Research – Tokyo, including Japanese natural language analysis and tracking to guide seniors and make the experience more natural. The nationwide infrastructure of Japan Post Group and its ability to cover the “last mile” to virtually every citizen of Japan. In addition to 24,000 post offices and a workforce of 400,000, Japan Post Group has existing financial relationships with nearly all of the 115 million adults in Japan.

“What we’re starting today draws on IBM’s long heritage of innovation at the intersection of technology, business and society,” said Ginni Rometty, President, Chairman and CEO of IBM. “The potential we see here—as broad as national economics and as specific as the quality of life of individuals and their families—is one example of the potential of mobile-led transformation anywhere in the world where issues of an aging population exist.”

“This initiative has potential for global impact, as many countries face the challenge of supporting an aging population, and we are honored to be involved in supporting Japan’s senior citizens and helping enrich their lives,” said Tim Cook, Apple’s CEO. “iPad is incredibly intuitive, easy to use and has accessibility features built in, making it a perfect device for any generation to be connected and engaged.”

Addressing a Global Priority As a percentage of global population, the elderly will increase from 11.7 percent in 2013 to more than 21 percent by 2050. Every day, 10,000 people turn 65, and 40 percent of seniors live alone or with their spouse only.**

In Japan, these historic generational shifts contribute to an imbalance in the labor force, a concentration of wealth among people who tend to spend less than other age groups, and significant strain on extended families. Today, nearly 180,000 people in Japan between the ages of 15 and 29 provide care for a family member.***

Next Steps Japan Post Group’s postal operations include the national Watch Over service. For a nominal monthly fee, mail carriers check in on elderly customers and assure families about the well-being of their relatives. That service can now be extended and enhanced with iPad, complementing the in-person monitoring.

Japan Post Group will begin the pilot service in the second half of this year, which will be offered in conjunction with the Watch Over service. The service will expand in stages, ultimately aiming to reach 4 million to 5 million customers in Japan by 2020.

About IBM MobileFirst IBM’s 6,000 mobile experts have been at the forefront of mobile enterprise innovation. IBM has secured more than 4,300 patents in mobile, social and security, which have been incorporated into IBM MobileFirst solutions that enable enterprise clients to radically streamline and accelerate mobile adoption, help organizations engage more people and capture new markets. Through IBM’s partnership with Apple, the two organizations are transforming enterprise mobility with a new class of industry specific business apps. For more information on IBM MobileFirst, visit the press kit or www.ibm.com/mobilefirst. Follow @IBMMobile on Twitter, and see IBM MobileFirst on YouTube, Tumblr and Facebook.