Apple utilizes a magnetic, inductive charging solution to charge Apple Watch, but a wired connection to the device’s hidden 6 pin port will make designing battery straps much easier, according to maker of the upcoming Reserve Strap accessory, and even allow for faster more efficient charging compared to Apple’s own solution. 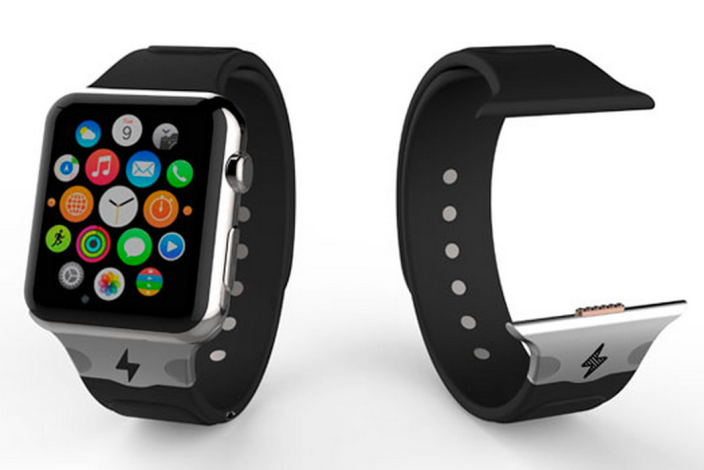 While the company initially planned on using a magnetic, wireless charging solution like Apple’s, after getting hands on with the Apple Watch confirmed that the hidden port will be a better option:

Our engineers have been able to independently confirm that the 6 pin diagnostic port underneath the Apple Watch case can be used for charging. The Reserve Strap will take advantage of this using a simple, retractable connector instead of the previous inductive charging cradle design… By utilizing this port instead of wirelessly charging, we’ve been able to achieve a higher charge capacity and quicker, more efficient charging times while also improving durability and eliminating any interference with Apple Watch functionality including taptic feedback and heartrate sensors.

The port, hidden inside of the slot where one side of the Watch’s strap connects to the device, is covered, but Reserve Strap will provide a tool to access it. Some speculated Apple included the port for diagnostics by retail employees— it didn’t, diagnostics are done through a connected iPhone— but Apple could have included the port for getting software on to Apple Watch at the factory and or for developer use.

In theory, Reserve Strap’s discovery means other accessory makers could create charging solutions and other smart accessories using the port to offer faster charging and other features that aren’t possible without it. It certainly helped improve the planned design for Reserve Strap in addition to the enhanced charging…

Here’s a look at the Reserve Straps new design (left) compared to its old design that would have relied on Apple’s wireless charging solution (right):

Reserve Strap is up for preorder for $249, but specific availability info will come later.