High-profile investor and AAPL shareholder Carl Icahn has published yet another open letter to Apple CEO Tim Cook, this time giving his thoughts on new product categories that he expects Apple to enter alongside his usual advice for the company on share repurchases, valuation, and more.

As for his product predictions, Icahn highlights two new big categories, both of which have been reported in detail and rumored for the last year, including TV and electric vehicles. Icahn thinks Apple will release full-fledged UHD TV sets sometime next year…

Icahn claims boldy that Apple will enter the TV market next year, not only with the revamped Apple TV it has in the pipeline, but also with 55-inch and 65-inch ultra high definition TV sets that will sell for on average $1,500:

Apple Television Set – after many years of rumors as part of Apple’s push into television and as we referenced previously, we expect in FY 2016 Apple will sell 55” and 65” ultra high definition television sets.  We forecast revenues of $15 billion in FY 2016 and $37.5 billion in FY 2017 on 10 million and 25 million units respectively with average selling prices of $1,500.

He continues by predicting Apple will offer a “suite of tiered products and services, including a “skinny bundle” of pay-tv channels (partnered with various media companies),” along with the redesigned Apple TV set top box that we’ve reported on extensively in recent months.

Next up, Icahn says he believes the reports that Apple will enter the electric car business by 2020 are true. Icahn adds that he believes Apple’s experience in lithium-ion batteries for vehicles will represent one of its biggest areas of potential growth:

Since lithium-ion batteries represent a large percentage of the cost of today’s electric vehicle, we believe Apple should be well positioned to leverage its existing knowledge domain and more robust R&D spending in this area, and in turn apply any energy density / battery life improvements for a car across all the other products in its ecosystem that will share the benefit from such battery innovation (iPhone, iPad, Apple Watch, MacBook, Beats).

The WSJ first reported on Apple’s plans for an electric vehicle, which later reports claimed would hit production by 2020, and we exclusively revealed the team that Apple has working on the project.

Icahn argues that Apple’s upcoming entry into these two new markets currently isn’t factoring into its valuation, and thus he thinks the company is worth a multiple of 18x with a valuation of $240 per share vs the $128.77 it was trading at when he wrote the letter. He also urges a bigger buyback:

After reflecting upon Apple’s tremendous success, we now believe Apple shares are worth $240 today…e. Considering our forecast for 30% EPS growth in FY 2017 and our belief Apple will soon enter two new markets (Television and the Automobile) with a combined addressable market size of $2.2 trillion, we think a multiple of 18x is a very conservative premium to that of the overall market… With Apple’s shares trading for just $128.77 per share versus our valuation of $240 per share, now is the time for a much larger buyback.

And not surprisingly, AAPL is up on the news: 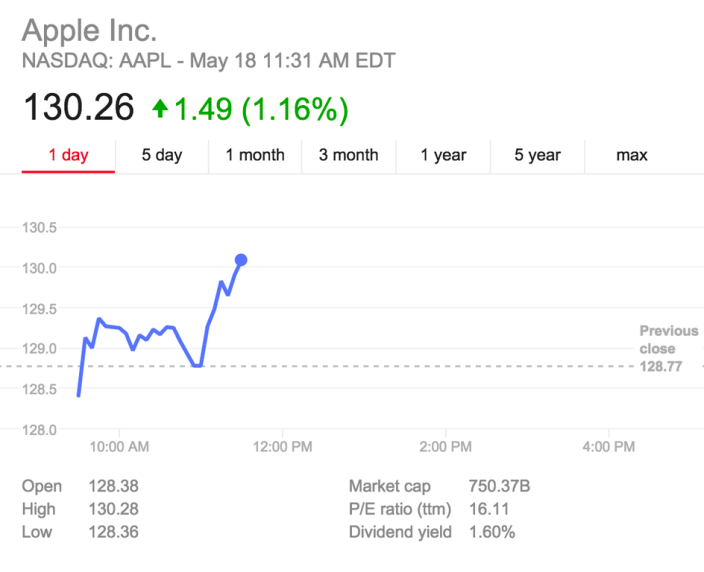