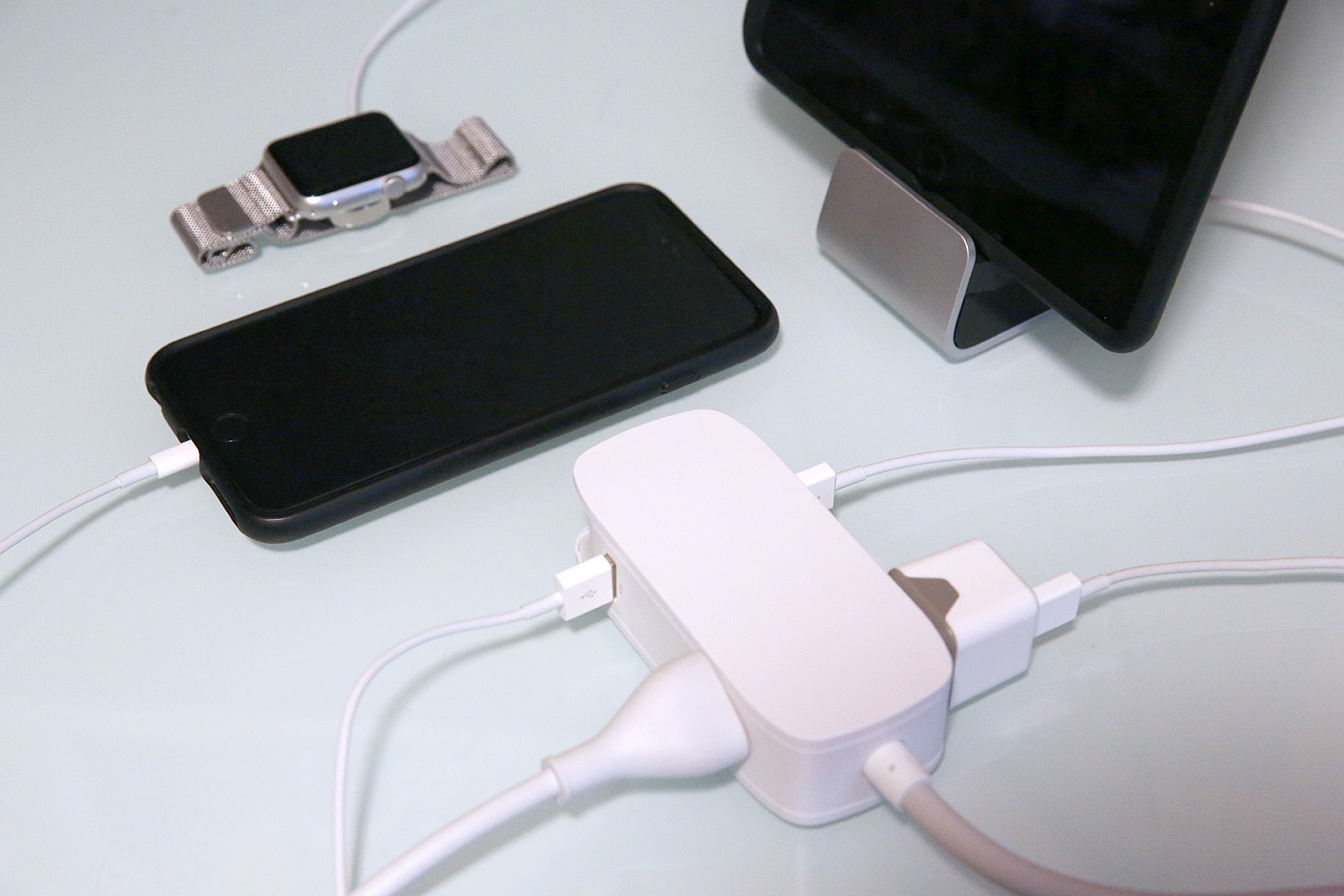 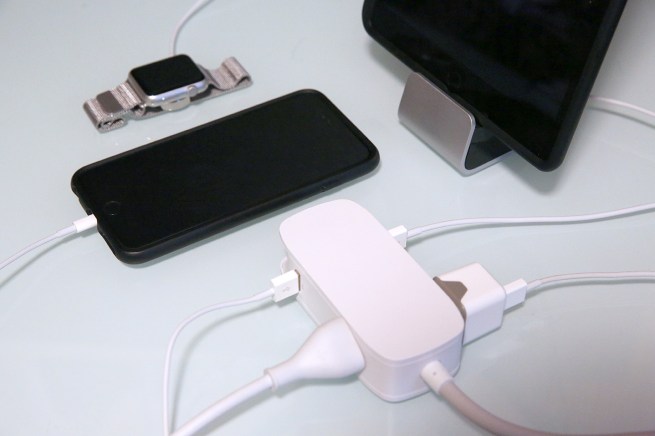 blueLounge isn’t a typical Apple accessory maker. If you look through its 15-year backcatalog of releases, you’ll notice that its products are markedly different from somewhat overlapping alternatives produced by rivals — intensely practical and cleanly-designed, yet sometimes so conceptually minor that they’re hard to review. Take CableDrop and CableDrop Mini, for instance, circular adhesive pads that each do nothing more than hold one cord in a fixed position wherever you want it. I use CableDrop Mini every day with my MacBook Pro’s power cable, but can’t justify a full review of something so utterly basic.

The simultaneous release of two new blueLounge accessories — Portiko ($25) and Pixi ($10) — gives me the rare opportunity to cover one of the company’s minor but practical items alongside one that’s more gadget-like. Portiko (shown above) is a wall- or table-mountable power source attractive enough to put on display between the four devices it can charge at once. It has enough USB and AC power outlets to handle a MacBook, iPad, iPhone, and Apple Watch at the same time, or other combinations of devices. Pixi is blueLounge’s latest cable management solution, a set of elegantly-built elastic and plastic bands that wrap around bunches of cables, tidying up your desk. Read on for more details and pictures… 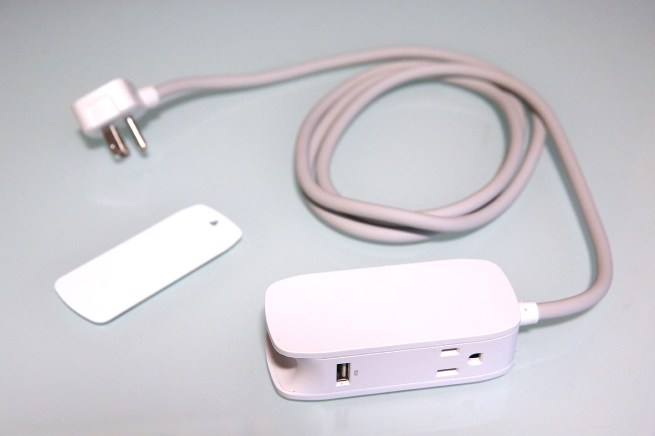 Portiko is the bigger deal. Made from either white or blue plastic, it’s a combination 2.4A USB charger and twin AC power charger with a 6-foot, 3-prong wall power cable attached. blueLounge ships it with only one detachable piece, a magnetically-attached metal plate, which can be placed on a wall or a desk using two strips of included 3M tape. 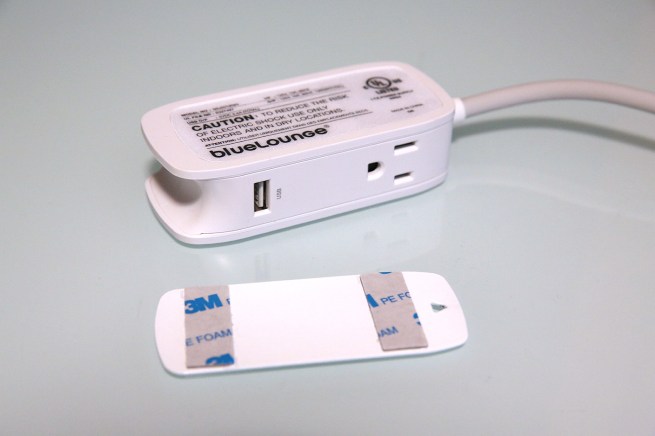 I personally prefer to feature original photography in my reviews, but blueLounge’s official images of Portiko in use do a great job of showing how it works. Each of Portiko’s sides has one AC outlet and one USB port. The AC outlets can collectively handle two MacBook Pros at a time, or one MacBook Pro and a self-supplied iPad charger. blueLounge has arguably underspecced the USB ports a little; according to the label on the U.S. version of Portiko’s bottom, they share 2.4A total output, though blueLounge’s site says 2.1A — it’s possible that the power will vary between countries where Portiko is sold. One of the ports is labeled “iOS” and “is dedicated for iOS devices to charge at full speed;” alternately, you can use both of the ports and split the power between them. That’s fine if you’re using the USB ports for an iPhone and iPod or Apple Watch, but could lead to slower-speed charging if an iPad’s on the wrong port.

As with all blueLounge products, Portiko’s appeal isn’t as much in its electrical engineering as its industrial design. Choose the white version, and the roughly 4.4″ by 1.95″ by 1.2″ box wouldn’t look out of place on an Apple Store table; the matte-finished plastic looks clean and super neutral. The blue version succeeds at standing out more and looking playful.

Portiko’s short edge has been designed with a deep groove to let you wrap the wall cord for increased portabiity, which you may in fact want to take advantage of: it effectively quadruples the capabilities of any single wall outlet, incorporating a two-port USB charger. blueLounge’s minimalist square 3-prong plug guarantees compatibility with tight wall outlets, too. 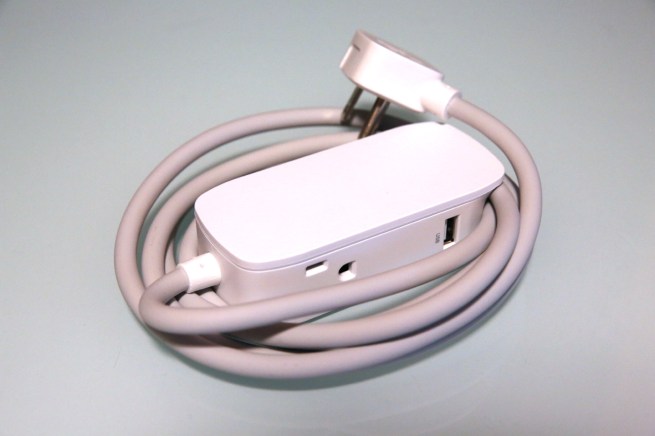 Collectively, all of Portiko’s design and features make it feel worthy of the $25 asking price. blueLounge’s charging accessories aren’t always affordable — it still sells Sanctuary-family four-device chargers with cable management boxes at a $100 MSRP (or $80 street price) — so Portiko feels like a relative bargain. If you’re looking for an atypically practical and versatile multi-device charger, it’s certainly worthy of your consideration. 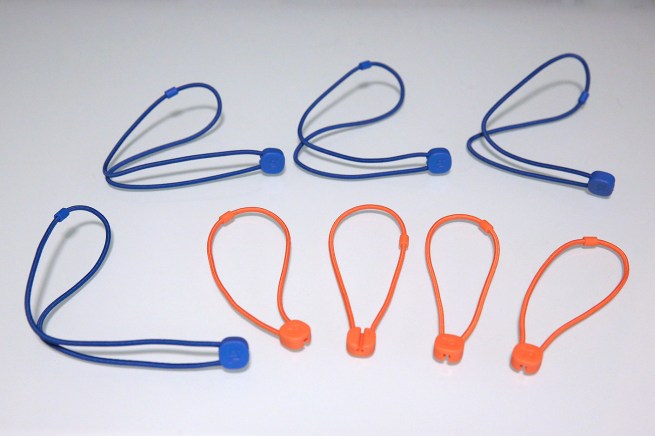 Pixi is a different story, but one that will be familiar to fans of blueLounge’s earlier cable management products. blueLounge describes them as “reusable multi-purpose ties,” alternatives to zip ties and twist ties that you won’t have to cut off, lose in your carpeting, or want to throw away. The “small” version shown here is a set of eight Pixi ties, four 4.8″ orange and four 7.8″ blue ties, also available in more neutral gray and black colors. It’s designed to be used with iOS device-sized cables and small accessories. blueLounge also sells a “medium” package (three green 12.5″ + three black 17.3″, pitched for household items, travel accessories, and stereo equipment) and a “large” package (two red 22″ + two black 33″, designed for camping gear, paper rolls, and yoga mats) for the same $10 price. 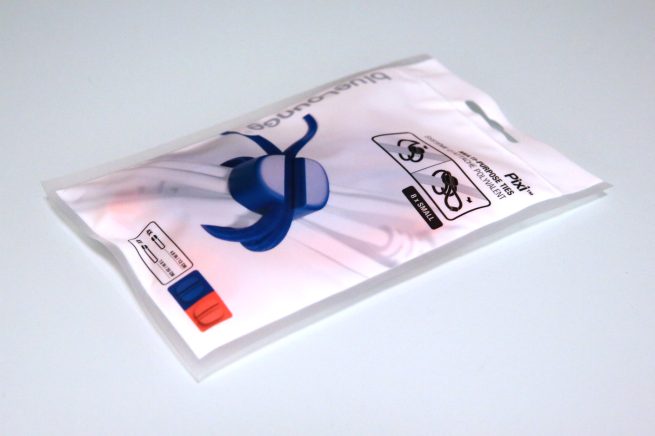 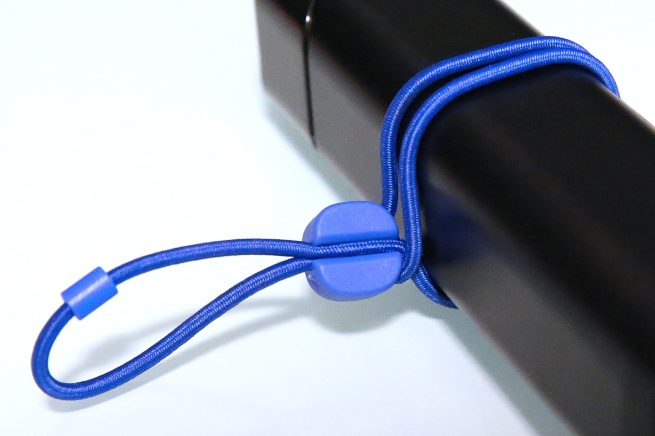 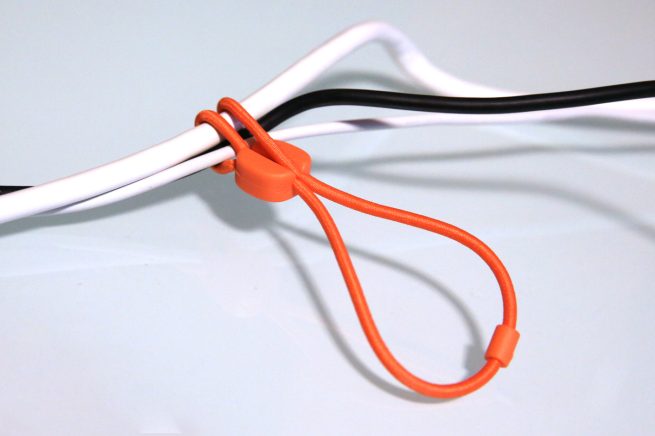 Like blueLounge’s other cable managers, Pixi leaves me with little to say. Each elastic cord ends in a somewhat flexible plastic disc with a groove in the middle; you just wrap Pixi’s cord around cables, use the groove in the disc to pinch Pixi’s cord at the preferred tightness, and that’s it. blueLounge notes that you could wrap Pixis around table legs — the 7.8″ or larger ones are best for that — using either straight-through or doubled-back locking positions. There’s no rocket science in this, nor should there be. Pixi cords work as expected, and like other blueLounge products, their build quality is great.

To attach one cable to a desk, or manage a single cable, I personally prefer the more minimalist looks of CableDrop and CableDrop Mini, but Pixi’s support for multiple cables and multiple thicknesses of cabling will appeal to some people. Given the variety of sizes, I see Pixi as having great appeal as a rolled object management tool for non-techies, as well as real value for those with lots of cables to manage.