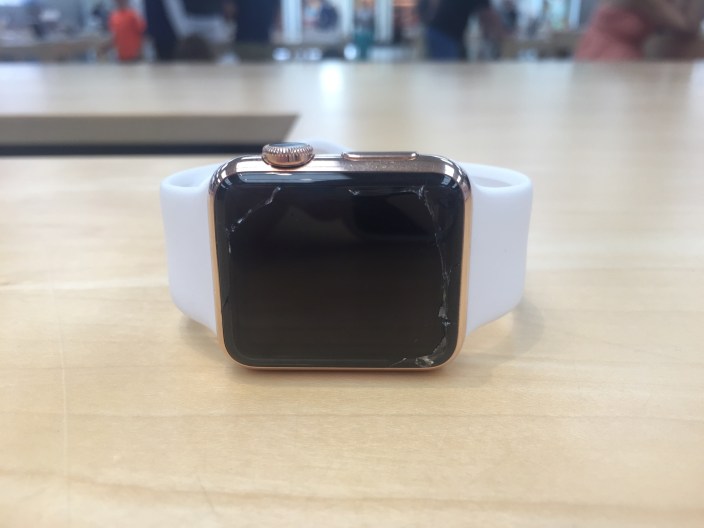 Yep, that’s a cracked Apple Watch display. Nope, it’s not actually an Edition, just plated, but the $549 and up steel model uses the same sapphire display as Apple’s $10,000 and up watch. And yes, the Apple Watch’s sapphire display reacts to accidental drops against hard surfaces just like iPhones.

In describing the craftsmanship of the Apple Watch, Apple calls sapphire “the second-hardest transparent substance after diamond,” adding that “that’s why we chose it to cover the Apple Watch and Apple Watch Edition faces,” but it still sells a $79 AppleCare+ warranty to cover accidental damage because sapphire is clearly not invincible.

As I mentioned during this week’s 9to5Mac Happy Hour podcast, the damage to the display happened during the tail end of my travels last week, adding an unfortunate surprise to an otherwise relaxing trip.

My wife took her Apple Watch off in the evening to charge before she washed her face, but decided to wear it just a little longer to get credit for standing and reach her activity goal. When she removed it at the sink to wash her face, it slipped from her grip and hit the sink’s countertop. Not the floor a few feet below, but the sink, a drop only inches down.

The watch landed face down and the surface of the countertop was just hard enough that the extremely short drop caused an impact substantial enough to shock the screen. As you can see, the result isn’t exactly like iPhone screen cracks which usually vary from a single hairline crack to a spiderweb of damage. The Apple Watch Sport appears to crack in a similar way, but the sapphire display found on stainless steel and gold Apple Watches tends to crack where it seems to be weakest: around the curved outline of the display. 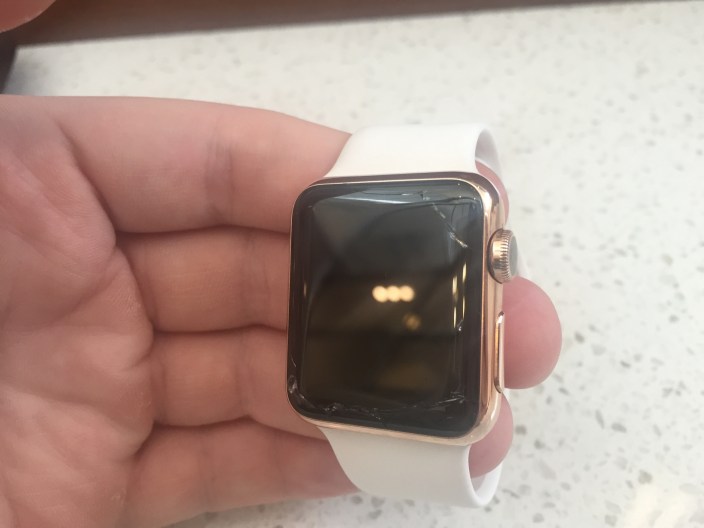 Like many cracked iPhones I’ve encountered over the years, the Apple Watch still functionally works, although the reliance on Force Touch, or firmly pressing the flexible display, means we’re hesitant to really test how long that remains the case. The damage to the display also means that watch isn’t going anywhere near water for obvious reasons.

For my own stainless steel Apple Watch, I’m being about 10,000 times more careful than I’d been since it arrived. I’ve been hitting door knobs around the house and bumping car doors outside without much concern since the sapphire display means added durability over the Apple Watch Sport’s X-Ion glass.

It’s a lesson in durability learned the hard way, though, and hopefully a precautionary tale to readers. Accidentally drop the Apple Watch like an iPhone, and it just might shatter on impact like an iPhone. As a side note, this had me thinking that perhaps a sapphire display might not be ideal for 4.7- and 5.5-inch iPhones as the added weight and reduced visibility in outdoor lighting may not be worth the expense if the durability isn’t markedly better.

So what should you expect if you do happen to accidentally crack your Apple Watch screen (and not in the way that Steve Jobs cracked TV) First off, virtually all Apple Watch-related servicing at the Apple Store’s Genius Bar that can’t be fixed with easy troubleshooting  gets shipped off to an external service center called depot.

Apple brings out the fancy mat before safely boxing up your band-less watch (it makes you remove the strap before servicing) and sealing it shut in front of you. Even software related issues like downgrading from watchOS 2 beta to the stable version of the Apple Watch software goes through this external service center. You’re quoted a price for servicing or repair, which may change depending on what gets discovered at depot, and promised roughly 5 business days before your Apple Watch returns to the store.

Covered under the $69 AppleCare+ for stainless steel Apple Watches, the watch service fee for accidental damage is another $79. You’re in for roughly $180 at this point, and you get one more instance of those $79 accident replacements within 2 years from buying the device. Circumstances may vary, but repairable watch damage outside of the added AppleCare+ warranty for the stainless steel watch will cost your $329 every time.

The unfortunate twist is in a case like mine where there’s a modification to the hardware introduced despite having AppleCare+ coverage. Despite welcome optimism from the Genius Bar crew, Apple’s offsite depot determined that the plating modification, although unrelated to the damage present, meant I would have to pay $500 for a replacement Apple Watch unit. The model with a Sport band and fresh warranty plus accessories only costs $549, so this choice obviously didn’t make sense. 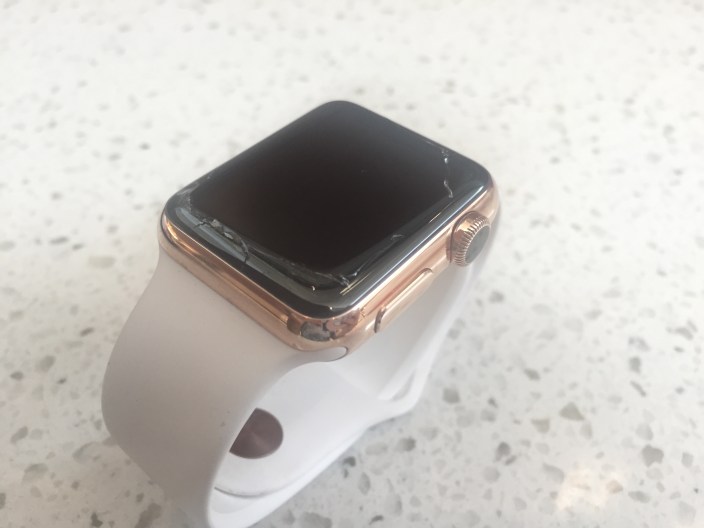 That’s the price though for applying a really great looking gold plating as it wasn’t unexpected and the plating had a solid run before the accident. Based on the positive feedback of the plating job, I’d continue to recommend it as an affordable option for classing up the Apple Watch while emphasizing the already known effect it has on the warranty.

The real lesson for me is that while it’s reputation tends to be that it’s indestructible, the Apple Watch’s sapphire display is hardly immune to the common slip and impact that leads to shattered screens we’ve seen plague other iOS devices for years.

If you’re on the fence about AppleCare+ for your Apple Watch and plan to keep it around for a while, I’d lean toward buying it. And if you’re using your Apple Watch during any extreme activity so you can capture your fitness data, investing in a cheap Apple Watch case that you only use for specific occasions may save you a lot of money in the event of an accident.

For me, the cost of repair isn’t economical versus paying for a new Apple Watch altogether, which feels like a shame considering for now only Apple seems to be offering screen replacements. So for now, our gorgeous-but-damaged Apple Watch will stay unused, while serving as a costly experiment for testing just how durable that sapphire screen really is in a real-life scenario.