Like a lot of 9to5Mac readers, I’m generally a purist when it comes to matching Apple hardware with accessories: I prefer iPhones and iPads without cases unless using one of Apple’s iPhone 6 Leather Cases or iPad Air Smart Covers and I can’t resist their overpriced Lightning Docks. If Apple made an Apple Watch Charging Stand, I’d be tempted to toss my Spigen Nightstand in a drawer in favor of the official solution.

And while I own both the Classic Buckle and Milanese Loop Apple Watch bands, I wear the simpler black Sport band on most days aside from a nice dinner or more formal occasion. Both are fine bands, but Classic Buckle can feel a bit too dressy with a t-shirt and shorts and Milanese Loop isn’t as comfortable as the other bands. For myself, I’ve found that there’s a space in between completely casual and totally formal for Apple Watch bands. Pad & Quill’s Classic Apple Watch Band takes a more traditional strap approach than even Apple’s Classic Buckle and fits this space, with four leather color options and two metal finishes that match stainless steel Apple Watches or Space Gray/Space Black Apple Watches.

I’ve been eager to try the Classic Apple Watch Band since Pad & Quill began transitioning their expertise in fine leather bag and case making toward prototyping Apple Watch bands a few months ago. After finally getting my hands on a Whiskey-colored American leather version, I’ve settled on a few first impressions on what is now my first favorite third-party Apple Watch band. Read on for details:

Classic Apple Watch Band ships in the same tasteful packaging style as Pad & Quill’s Apple Watch stands with a wax stamp sealing the box shut. Inside the sturdy cardboard rectangle you’ll find the leather band on soft padding to fill the box plus a paper insert describing Pad & Quill’s history, care instructions, plus P&Q’s 30-day money back guarantee and 25 year leather warranty. No adhesives or plastic to recycle or discard like you find with Apple’s bands; just excellent, minimal packaging and a pleasant leather smell not unlike opening new boots. 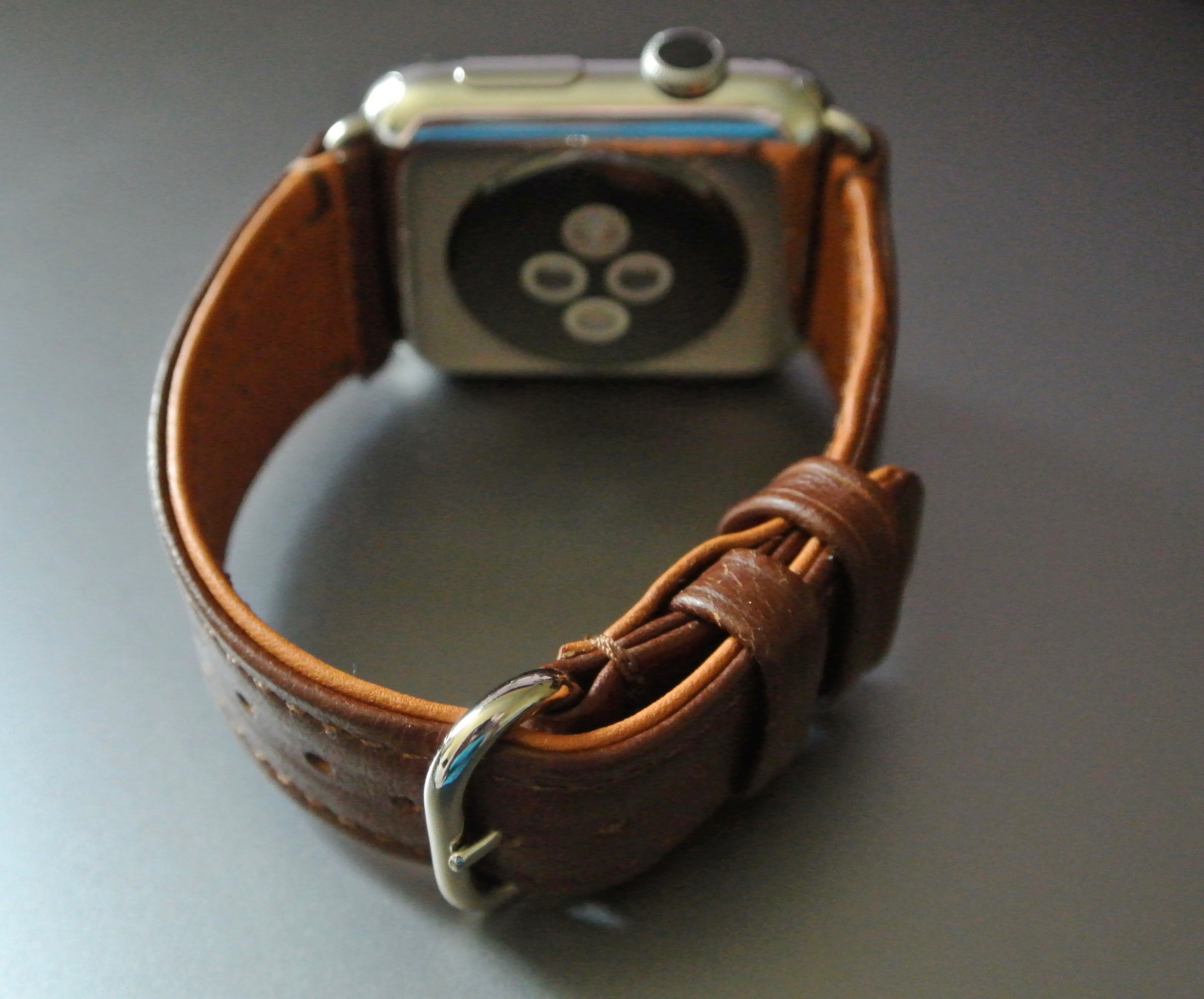 Classic Apple Watch Band uses the same lugs and connectors as Apple’s own bands so swapping bands is exactly the same: squeeze either button under Apple Watch to release your current band and slide the Pad & Quill band in just the same. Both lugs on mine fit just the same as Apple’s own bands without any gaps or excess metal that I’ve seen on other, cheaper third-party bands. And I had zero concern about the strap coming loose during normal wearing. 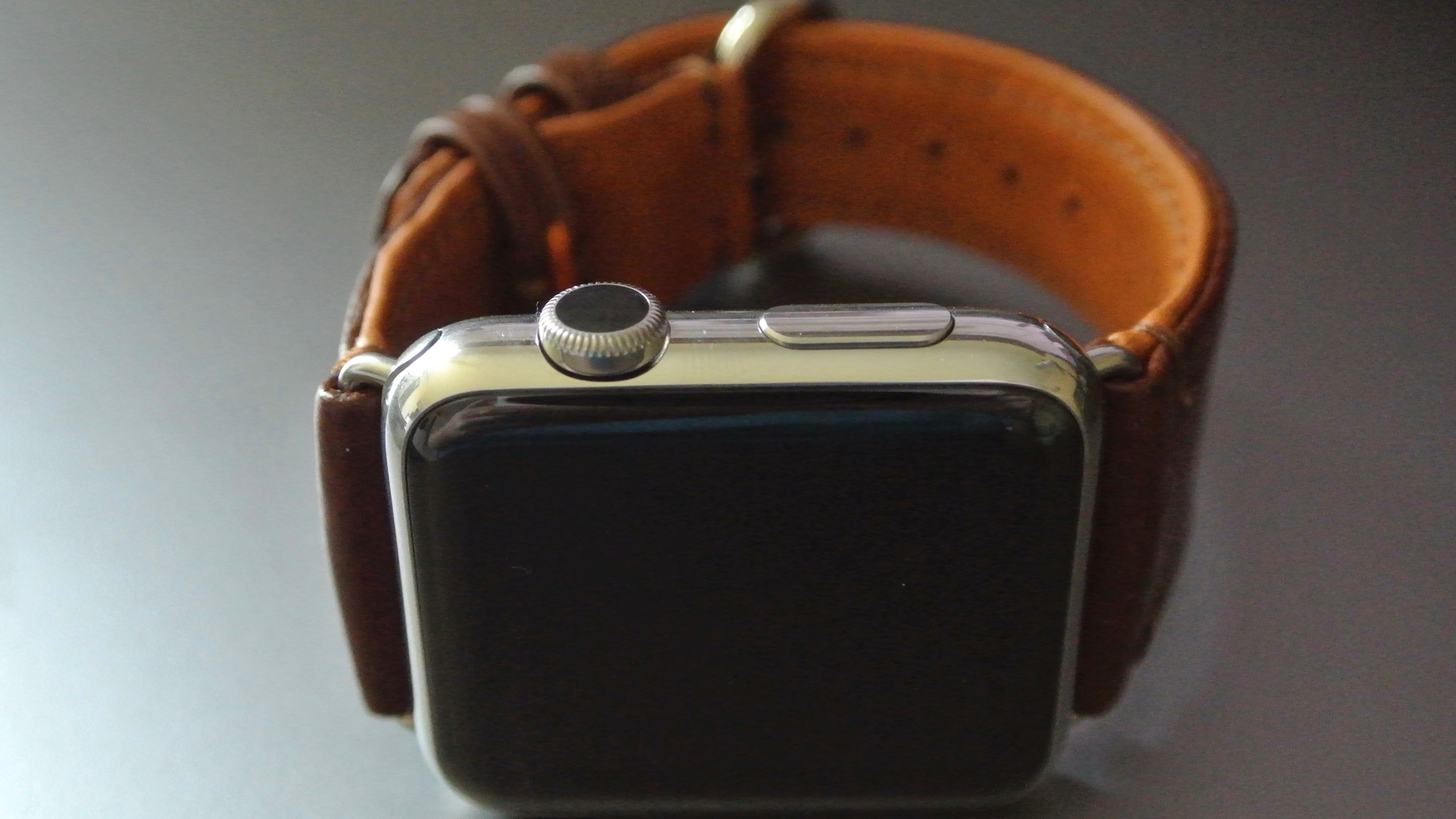 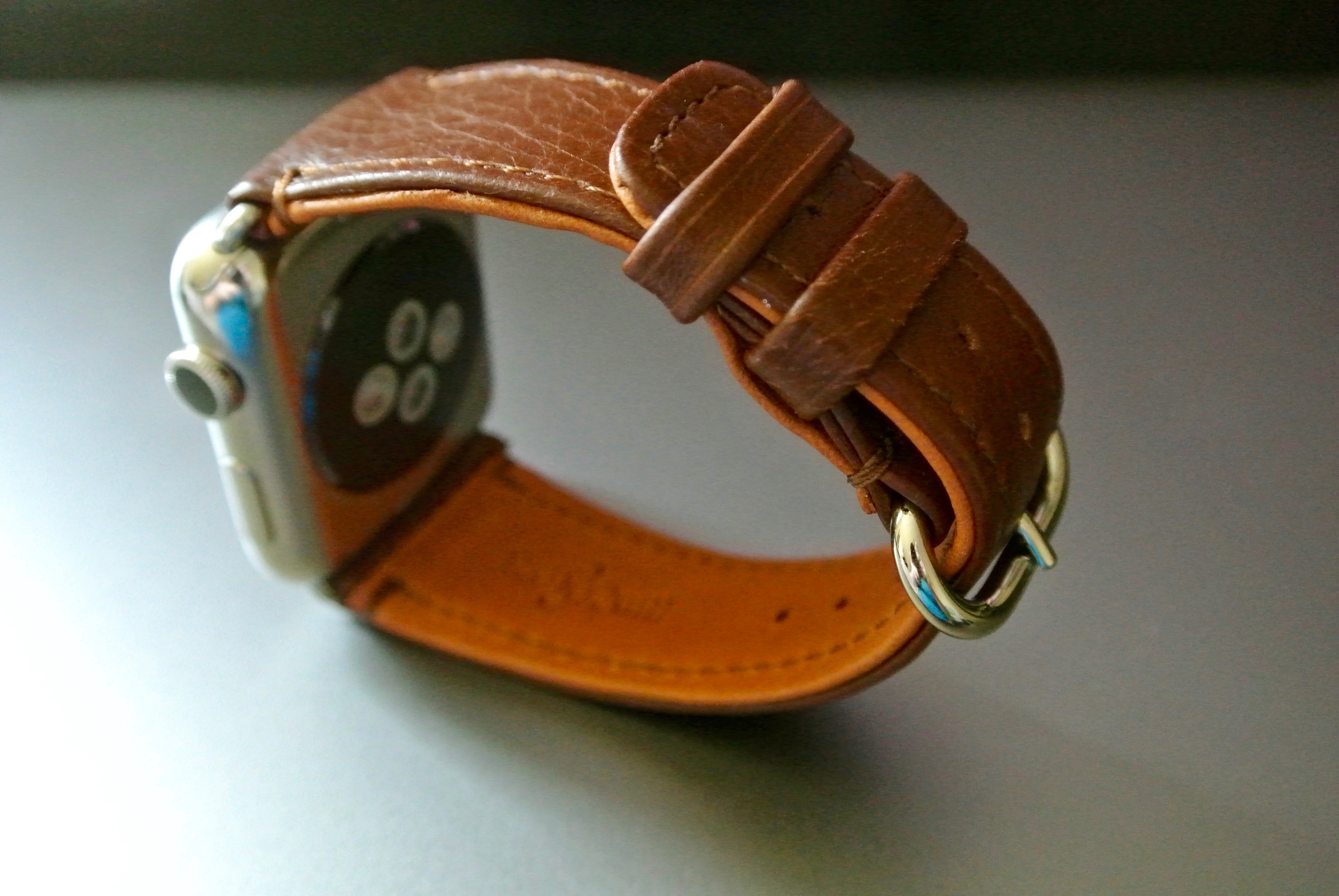 Compared to Apple’s Classic Buckle strap, Pad & Quill’s Classic Apple Watch Band feels much stiffer before getting worn in and conforming to the shape of your wrist. This makes it feel much more rugged and sturdy in comparison. I did find it noticeably more difficult to initially remove when worn snug, but this quickly became a non-issue after wearing and removing it a few times. From the start, I found it completely comfortable to wear in various contexts: writing at my desk, outside in summer heat during activity, or just sitting idle. No issues with tugging arm hair or irritating skin on contact. 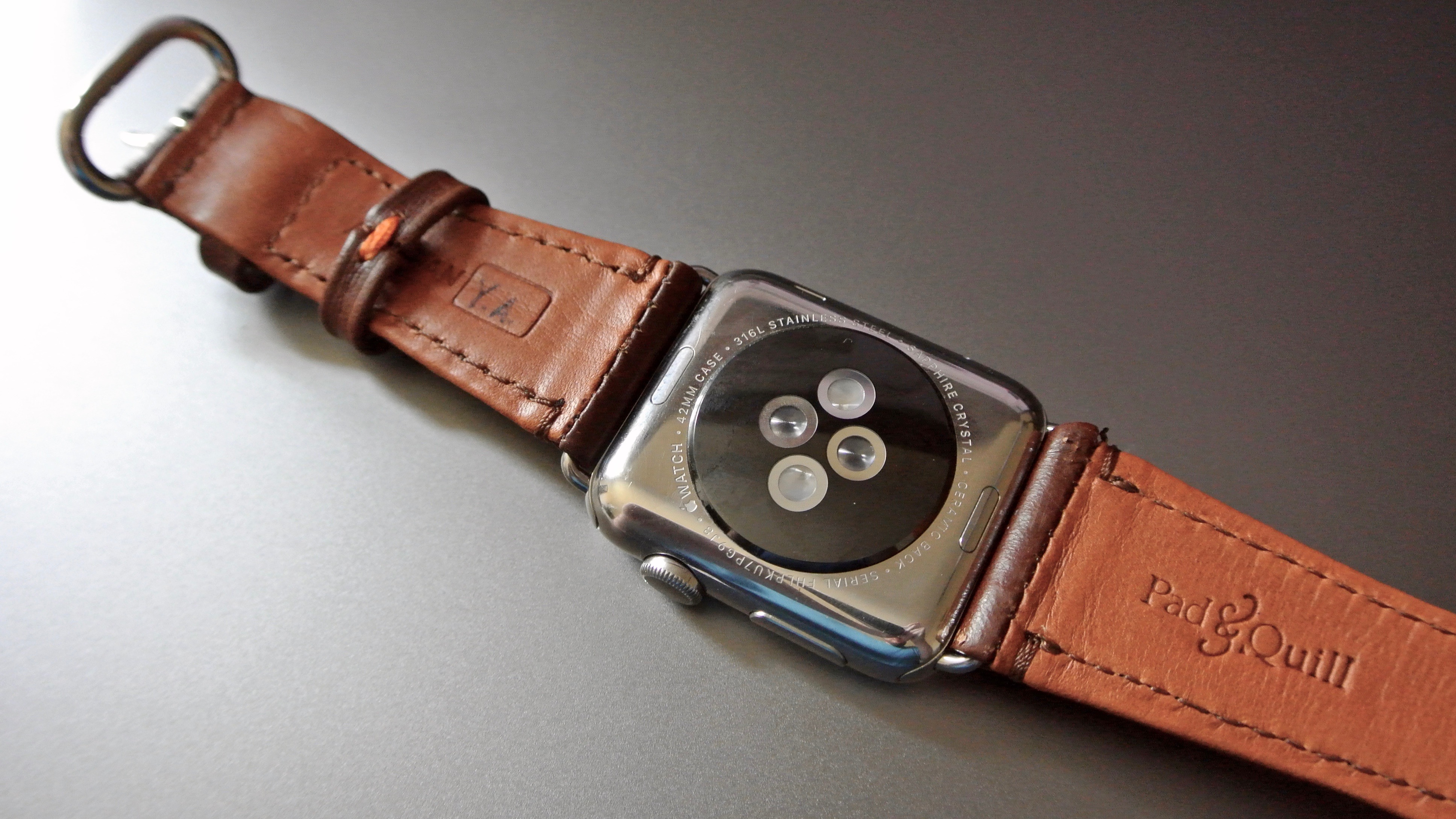 While the metal clasps on Apple’s Classic Buckle band and P&Q’s Classic Band are mostly the same, the latter strap does feature two loops for holding the loose end of the band rather than one. One loop is fixed and boxier while the other loop is adjustable and features Pad & Quill’s signature orange stitching to honor the World Vision organization and add a unique touch. Further adding a one-of-a-kind mark is the artisan’s signature on the top half of the band’s backside; there’s zero visible Pad & Quill branding when wearing Classic Band, but underneath the lower half you’ll find a tasteful company stamp printed in the leather.

Further comparing Classic Band and Classic Buckle, Apple’s version features 12 rectangular notches along the longer strap while Pad & Quill’s holds just 9 circular slots for sizing. With either 42mm band, I have 4 slots open toward the watch; for reference, I use the third slot on the medium 42mm Sport band with 4 open inner slots. With either band, the leather quickly picks up an indention of wear near every slot you frequently use. 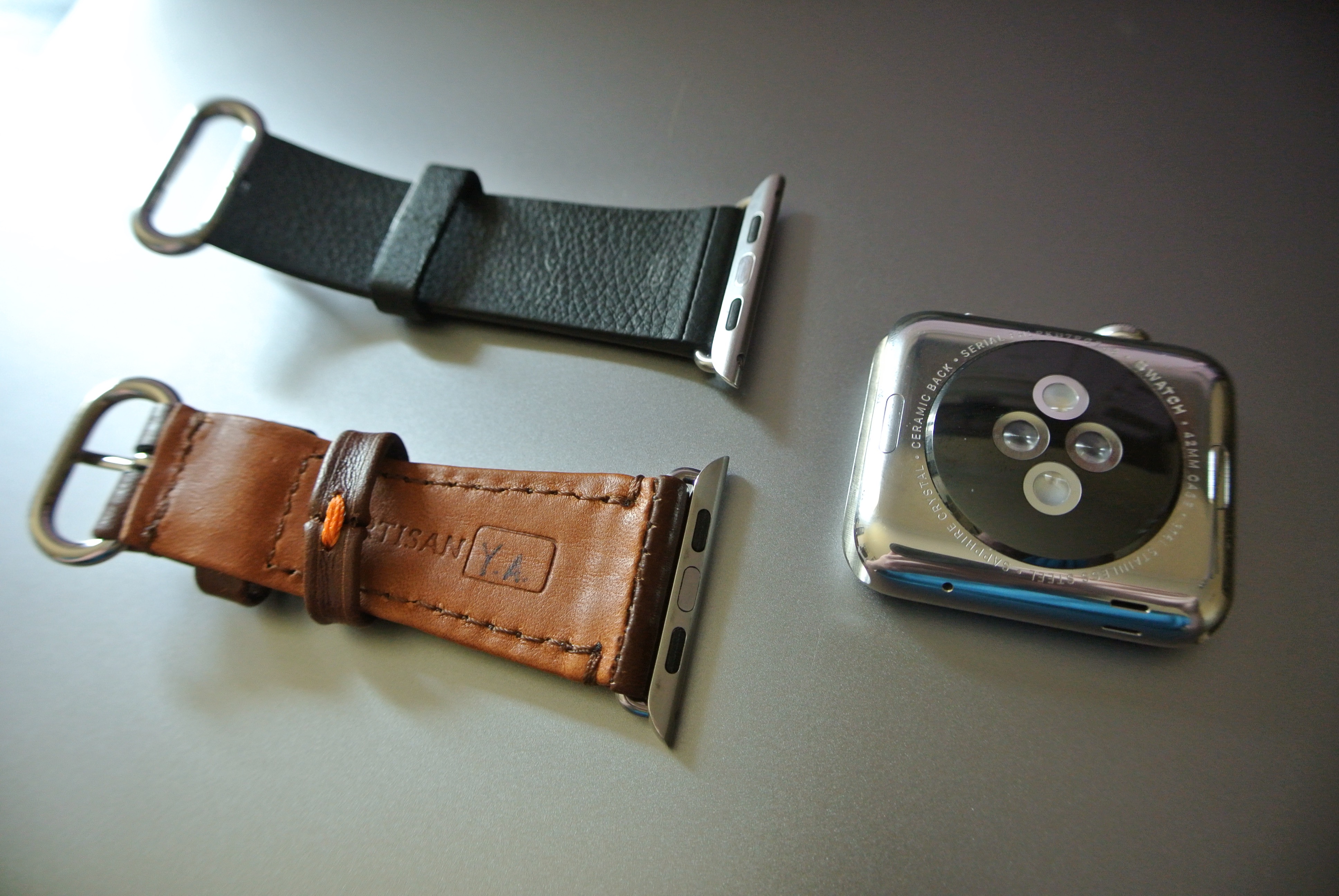 Also of note, Pad & Quill’s strap features a more defined width increase toward the watch with the end about as wide as the watch face itself and just barely slimmer than the casing. Personally, I find this makes P&Q’s band feel more substantial with the emphasis near the watch body less on the lugs and more on the leather. This also differentiates Classic Band from Classic Buckle and makes it a much more unique strap compared to Apple’s own leather option. 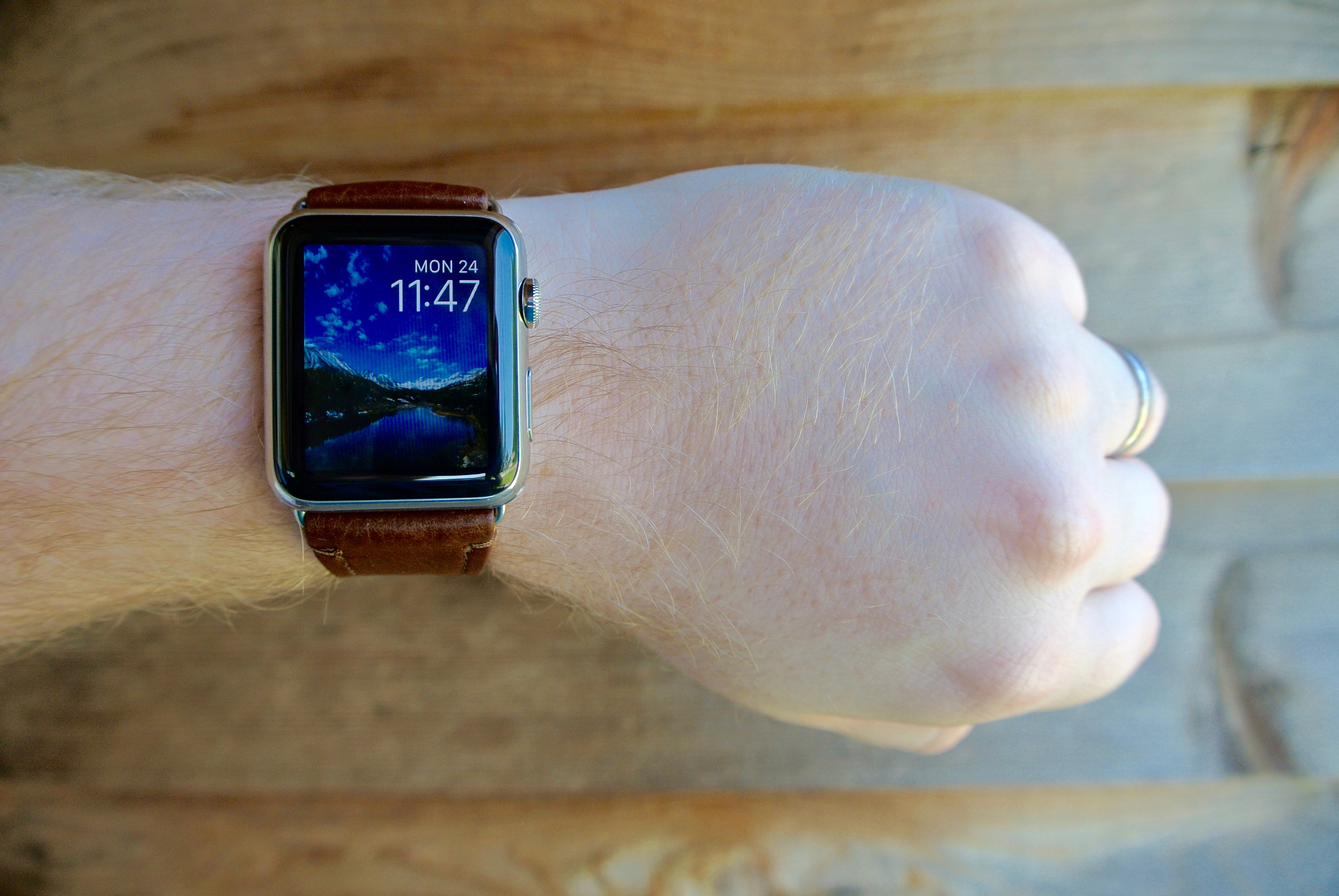 While I generally don’t dislike Apple’s Classic Buckle Apple Watch band, I do find Pad & Quill’s Classic Apple Watch Band better in a few ways. While it does feel a bit stiffer and may initially be more difficult to remove in comparison, I’m personally a fan of its more rugged, almost John Wayne cowboy style, which makes it feel even less like a smartwatch and more like a fine timepiece.

As a final observation, wearing Apple Watch with Classic Band at a comfortable and snug level makes feeling the Taptic Engine, or haptic feedback, more noticeable than with Apple’s Classic Buckle strap. This likely varies based on wrist size and band tightness, but it’s an important detail in my case as I generally haven’t found Apple Watch vibrations to be especially noticeable in many instances.

If you own either stainless steel Apple Watch and want a well designed leather strap that has a little more to offer than Apple’s Classic Buckle offering, Pad & Quill’s Classic Band is an easy recommendation. If you’re an Apple Watch Sport owner wanting to dress up your watch without breaking the bank, Classic Band’s under $100 price tag especially makes it a no-brainer.

Pad & Quill’s Classic Apple Watch Band is the first third-party strap that I’d even consider (and actually will!) wear daily. There’s nothing subpar or knock off about it; just a sturdy and good looking strap from experts at turning leather into something special.

Even from the perspective of an Apple accessory purist, I can recommend Pad & Quill’s Classic Band as totally worthy of matching your Apple Watch. Available in British Tan (orangish brown), Whiskey (that’s my poison), Chocolate (darker brown), and Galloper Black with either stainless steel or polished black metal, Pad & Quill’s Classic Apple Watch Band is available for pre-order now and ships in mid-September. In short: this is by far my favorite thing Pad & Quill makes.