Review: Are Belkin’s latest Wemo lights worth the investment before HomeKit support? 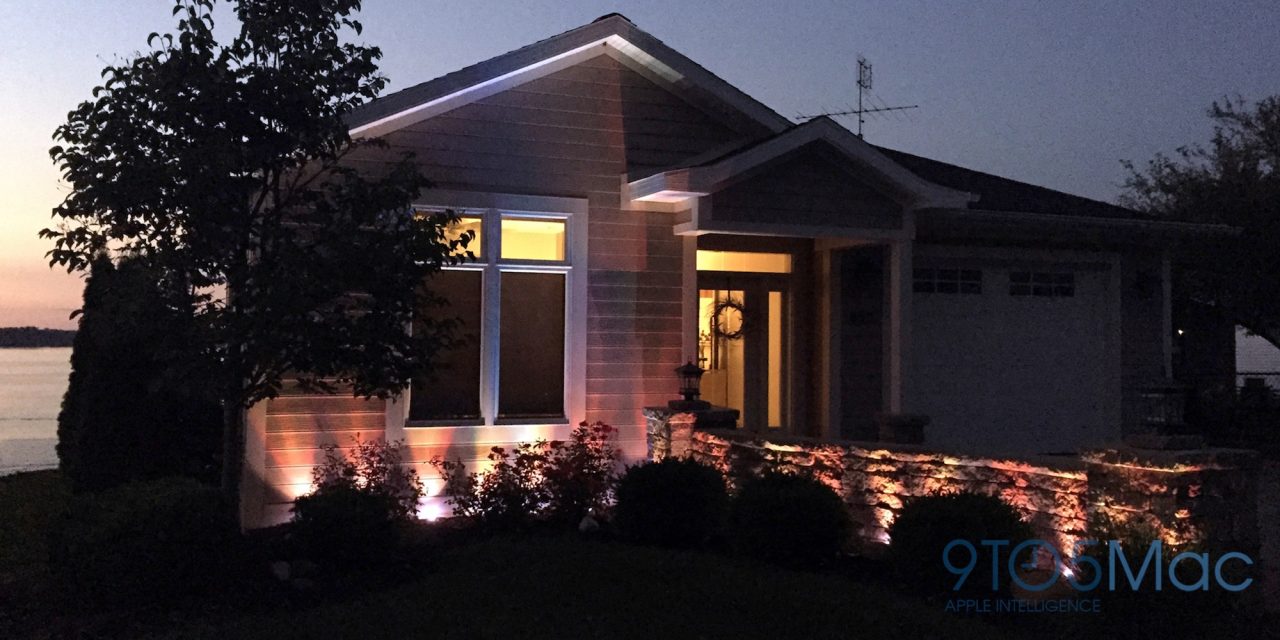 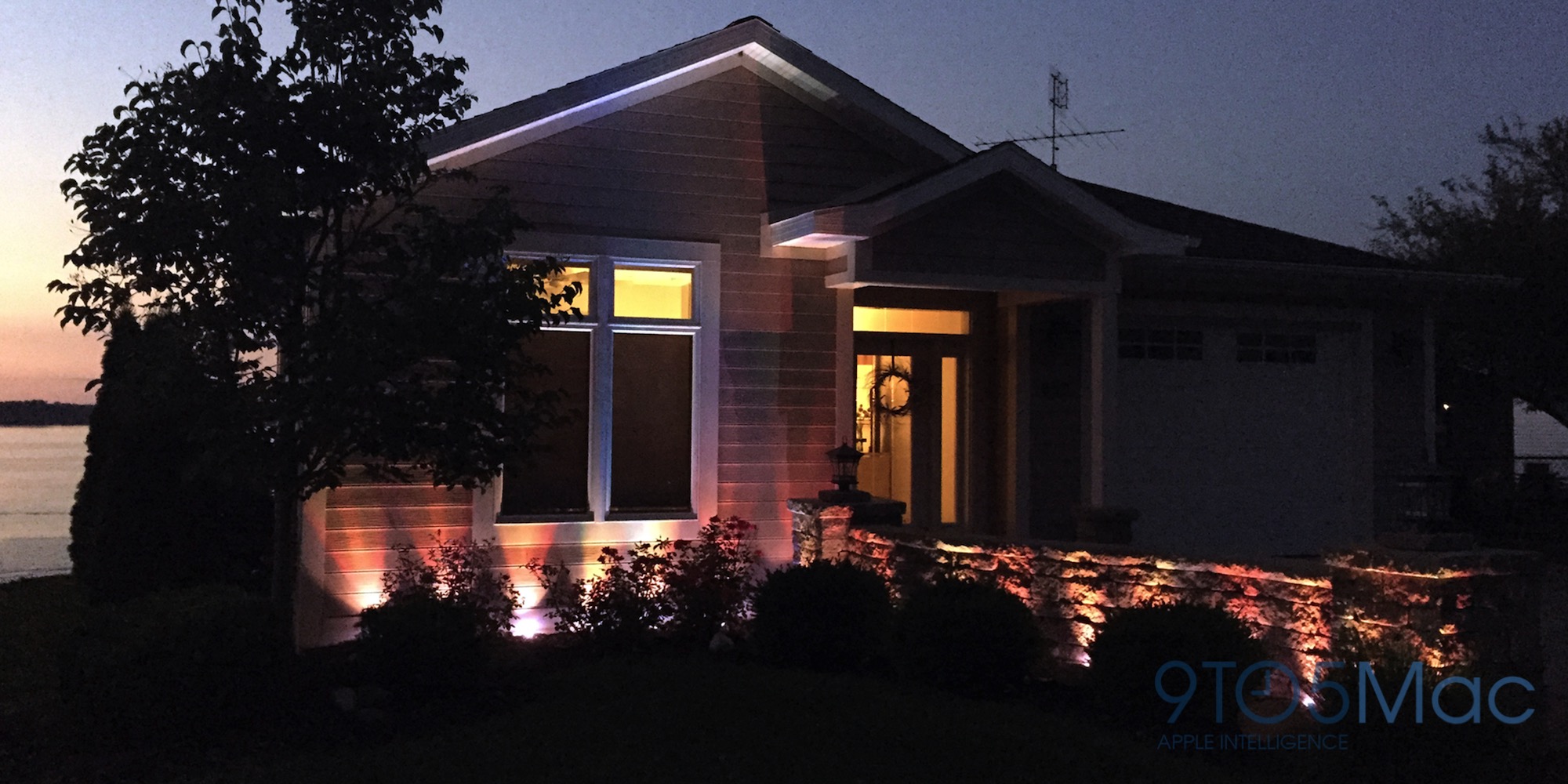 Belkin’s three latest products in its Wemo line of Wi-Fi connected, smartphone-controlled products for the home include a white bulb starter kit, a versatile strip light, and garden lights for outdoor use. The last two are both tunable to thousands of colors and all three connect to Belkin’s Wemo ecosystem and companion app for remote control from your iPhone. All three of the products are through a partnership with OSRAM SYLVANIA, who provided the lightning products that Belkin has integrated into its Wemo platform. We took the three new starter kits for a test drive to get a second look at the growing Wemo platform and see if they are worth the investment before support for Apple’s HomeKit…

The setup for all three products in terms of getting connected is the same as most of Belkin’s Wemo products and designed to be quick and easy. Since all three are what Belkin calls “starter sets”, the boxes include everything you need to get up and running: Belkin’s “Wemo Link” WiFi bridge, a small iPhone adapter-size device that plugs into a power outlet, comes with all sets. The Wemo Link lets your various Belkin Wemo products connect to your Wi-Fi network, and lets you pair multiple products using a single bridge. So if you want to pick up some additional bulbs, for example, you can forgo the starter set the second time around and pick up just the bulbs since you already have a Wemo Link (a single Link supports up to 50 bulbs). 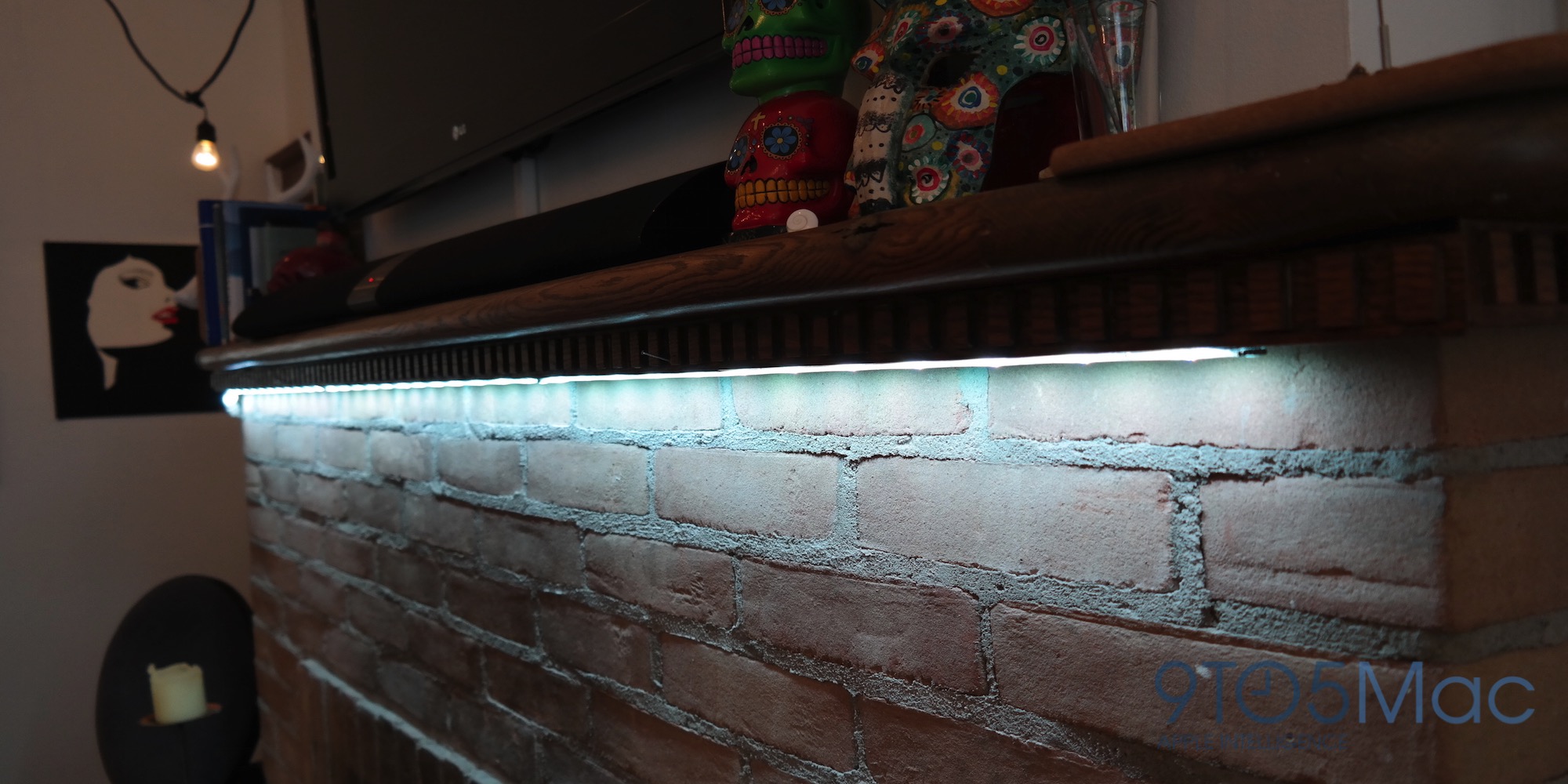 Once your bridge and lights are setup and plugged in, you’re supposed to be able to just download and open the Wemo app for iPhone. The app automatically scans for devices and lets you pair with a single tap to start controlling the light. In my experience, however, it took a few shots to get the lights connected. They’d be recognized in some cases but have trouble pairing, while in other cases they would’t appear at all. During other instances the app would attempt to download a firmware update before crashing or giving an error and forcing me to start over. I gave up after a handful of attempts the first time, but I tried again the next day and got everything connected after a reboot or two of the bridge.

Now that I actually have the lights connected and the firmware update installed, I haven’t experienced many issues with connectivity when controlling the lights from the app. A minor stepping-stone to get to the good stuff, but plan to set aside much longer than a quick 5 or 10 minutes for setup.

The features of the three products are quite similar, as they are controlled via Belkin’s Wemo app once synced to you Wi-Fi network. All include the ability to change colors and or temperature, control the lights individually or create groups for several at once, and all have brightness control and sleep faders. There’s also a Rules feature within the app that lets you setup automated schedules for controlling the lights, like turning on or off specific lights or groups of lights by time and date. Have your lights turn on or off at sunset, for example, or automate lights with an Away Mode to turn on or off at certain times each day.

And all of the lights work with IFTTT, the service that lets users automate tasks from several web services based on rules, allowing them to have their lights turn on or off based on their actions with other apps and web services. Belkin gives the example of using IFTTT to have the lights change to a “favorite team’s colors at game time, or automatically turn on the lights inside when it starts raining outside.” I’m not much of an IFTTT user, but it’s nice to know support is built in for those that might find it useful.

Those features are the same across products, but each of the three have very different use cases. Here’s a breakdown: 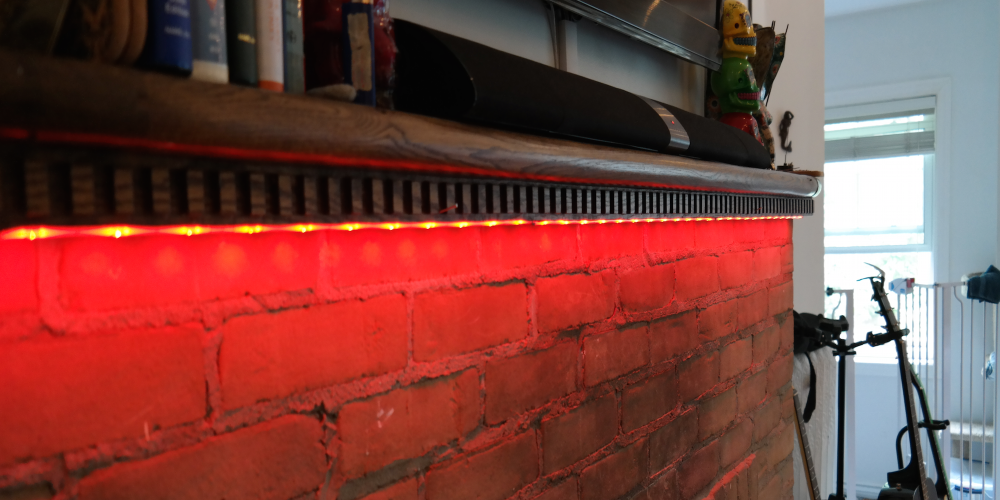 The Flex RGBW Starter Set comes with three flexible, 2 foot long LED strips that you can stick just about anywhere there is enough surface area. You can also add additional length by purchasing another three, 2-foot long strips sans the Wemo Link bridge for $64.99. Underneath cabinetry in a kitchen or elsewhere seems like the obvious use case, but I opted to add the lights underneath the mantel on a fireplace, as pictured above. The lights are fully dimmable (and tunable from 2,700 – 6,500 Kelvin), and offer thousands of colors (as pictured in the app screenshots above).

It comes with a power supply for the lights, which means you’ll need to consider having outlet close by when deciding where to place them. Apart from that, however, installation couldn’t be easier thanks to 3M adhesive already applied to the back of the lights. You simply pull off a covering to reveal the adhesive and stick to your surface of choice.

Belkin says to expect a 20,000 hour lifespan for the bulbs. 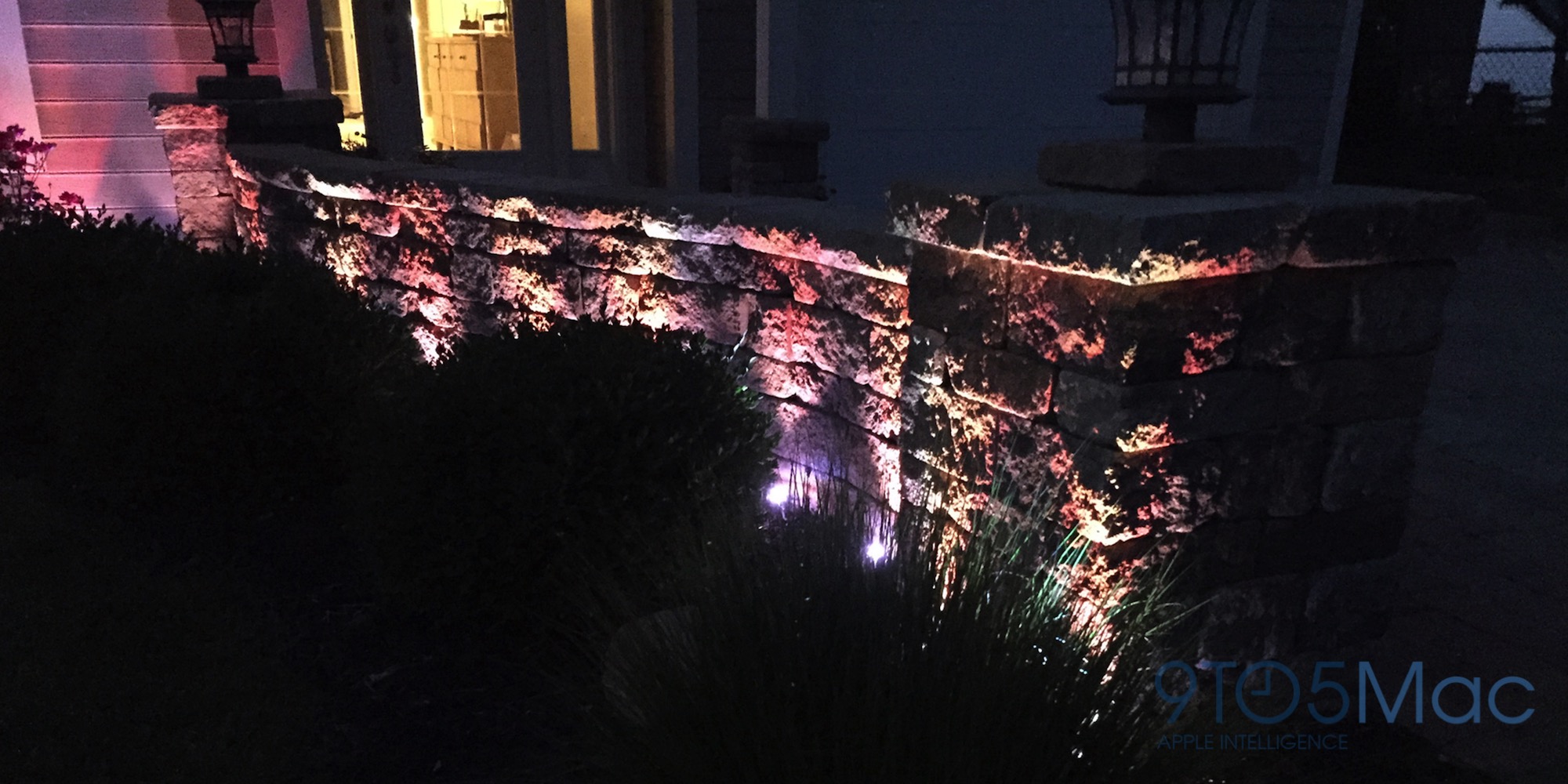 These outdoor lights could technically be used indoors as well, but they are clearly designed for garden use with a classic garden light design with one 14 foot string of nine Gardenspot Mini LED lights and included mounting picks for positioning securely into the soil. Belkin also points out that you can optionally mount to a wall using the included tape or opt for a professional installation to have the lights recessed into a deck or fencepost, for example. The lights are sturdy enough that we didn’t have much worry about them being exposed to the elements and Belkin says they have a “wet-rated build quality” to withstand rain and other harsh conditions. We used them in the ground in the garden around the exterior of a house, as pictured above and below.

Like the strip lights, the Gardenspot lights also offer thousands of colors and full control over dimming and temperature through the campaign app pictured above. Belkin says to expect a 25,000-hour bulb lifespan, and it sells the 14 foot string of nine lights on their own for $80 without the Wemo Link Wi-Fi bridge included in the starter set. 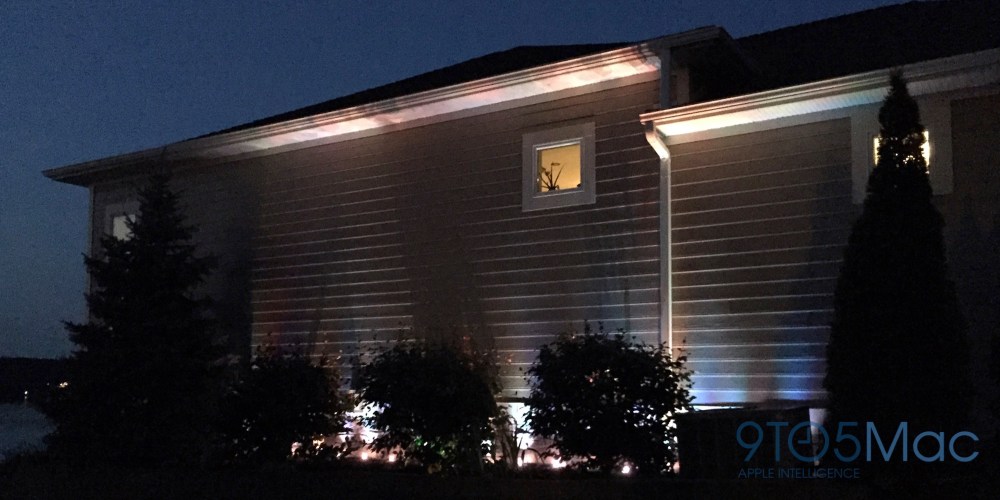 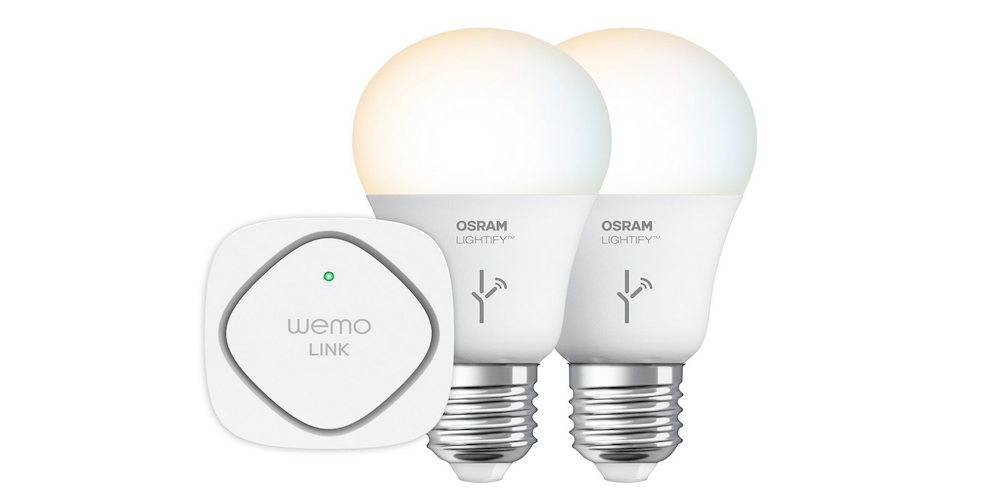 This set is the most straight forward of the three: two tunable, 60 watt equivalent LED bulbs get plugged in wherever your standard light bulbs can go (lamps, spotlights, recessed lighting, etc). You get a temperature range of 2,700 to 6,500 Kelvin, which means you’ll get those cold blue whites right to more warm yellowish tones, but you don’t get any control with these bulbs like the two other new starter sets.

You can buy additional bulbs for $29.99 a pop, a bit more expensive that Belkin’s own Wemo branded Smart bulbs that come in a 2-pack starter kit for $45 or as singles for $20 each. Belkin says to expect a 20,000 hour lifespan for the bulbs.

No HomeKit? Should you buy it?

HomeKit products are still in the early stages with just a handful on sale since an official launch a couple of months back. Apple’s framework for home automation accessories adds a lot of potential to a connected home setup, but the main feature that you’re sure to miss on products that don’t yet support the platform is Siri control. I recently reviewed one of the first HomeKit product son the market, iHome’s iSP5 SmartPlug, and was quite impressed with how much being able to control products with Siri voice commands added to the overall experience. Being able to quickly switch on or off a light or other product using your voice feels like a big improvement over having to navigate within and switch between multiple apps for products from various manufacturers just to something on or off.

Not having it is not exactly a deal breaker at this point, as there are so few products on the market that actually support it, but I’d be hesitant to invest a lot of money into any one platform without at least a promise of support in future products. Especially as Apple plans for improvements for HomeKit sooner rather than later. Fortunately, Belkin is one company that has confirmed plans to support the platform in the near future, which likely means a bridge will be available for your existing products and new products will all include support out of the box.

With that in mind, Belkin does have one of the most compelling and complete platforms of Wi-Fi connected, iPhone-controlled accessories for the home, and its commitment to the platform, as well as partnerships with reputable manufacturers like Sylvania, is a good sign of things to come for those that do decide to invest in Wemo.

And after you have a starter kit, get additional bulbs and lights without the starter kits through Belkin’s site.