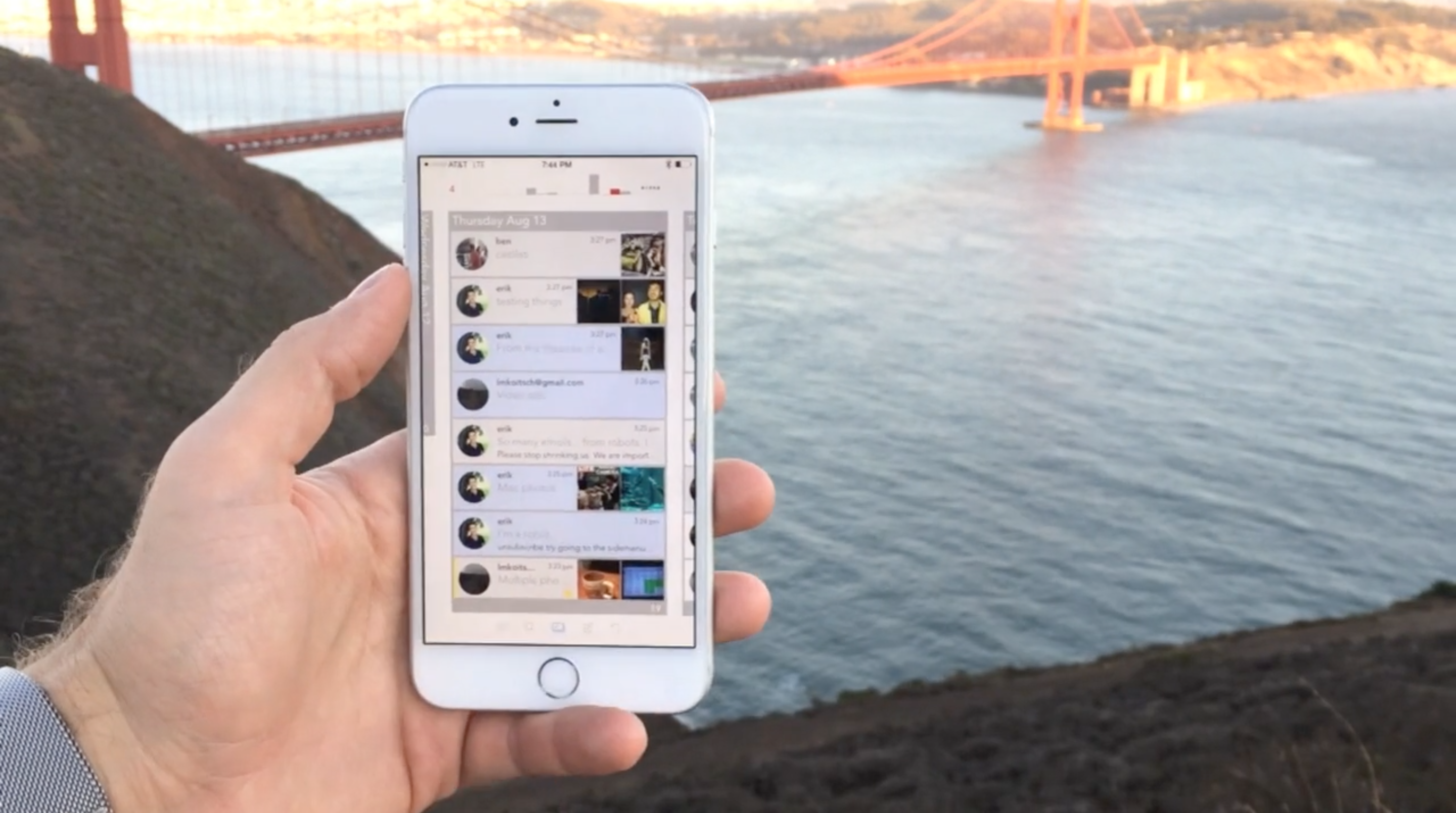 Email apps are dime-a-dozen these days, and every single one claims it brings some incredible new tool to the table that will change the way you do email forever. Usually this just means you can attach images from Dropbox or some other otherwise unremarkable feature.

Geronimo is the latest in a long line of email clients for the iPhone, but unlike many others, it actually does manage to introduce a new management paradigm to the decades-old communication platform. Keep reading for details on its creative new inbox view and gesture-based management message management system.

The main inbox view in Geronimo is unlike anything you’ve seen in any other mail app. Rather than a vertical list of messages, you’re presented instead with a horizontal timeline that breaks up your messages by the date they arrived. Each section can be collapsed or expanded to view the messages that came in on that day. Messages can also be dragged into any order you prefer, allowing you to keep important ones at the top of the screen.

Across the top of this view is a histogram that compares the amount of mail you got on each day. You can tap the bars on this graph to jump to any day. A button next to the histogram hides it and replaces it with a list of VIP contacts that you can specify by tapping an empty slot.

Pinching in or out in the blank space on the inbox view will zoom in or out to show more or fewer days at once.

This horizontal view can present some usability issues. While it’s nice to see a timeline of when your messages arrived, it often means scrolling around to the left and right looking for a message in your inbox, as well as vertically if there are lots of messages from each day. Because the screen primarily scrolls to the sides, the pull-to-refresh gesture requires you to swipe beyond the right edge, and the “Release to Refresh” text of the indicator in sideways to fit in the space. It’s a bit off-putting to have to turn your phone sideways to see what the text says (there are several such indicators with various messages in the app), but once you know what it does, you won’t have to do that again.

Luckily, if you prefer the classic view, you can tap-and-hold on the histogram to get one big vertical message list.

Gestures play a big role in Geronimo’s management system, though unfortunately they can be a bit easy to trigger in areas you may not expect them to do anything. In attempting to scroll vertically on a list of messages, for example, I accidentally executed a gesture (I still don’t know exactly which one) that caused all of that day’s messages to be archived. I ended up having to go into the stock Mail application to find them and restore them to my inbox.

Other gestures are a bit more useful. You can select “Hot Corners” in the app’s settings and drag emails from the list view to the corners of your screen to quickly move, label, mark, flag, or archive messages. You can also grab a message and quickly flick it to the corner to accomplish the same task. This same gesture can also be used in the individual message view to quickly file away your current message and move on to the next one.

Alternatively, you can tap one of the corners to activate that hot corner, then rapidly tap emails in the inbox to apply that hot corner’s actions to each one, powering through long lists of messages in a matter of seconds.

You can select multiple emails and quickly flick your wrist in a certain direction to “throw” the emails into the hot corner. You can also flick your wrist to change between days on the timeline view, though this feature is initially locked, and can only be unlocked by using the app for several days.

Emails and photos can be marked up with handwriting (which is then converted into regular text through optical character recognition) or hand-drawn doodles. You can snooze incoming messages to get them re-delivered at a later time. A built-in calendar manager lets you keep track of upcoming events stored on your Google Calendar. Attachment previews are included not only in the message view, but also directly in the inbox, allowing you to quickly spot what you’re looking for. An option in the settings can automatically detect emails sent by automated systems and minimize their presence in your inbox. Of course, staple email features like search are also available. There’s a lot of powerful functionality here.

The Geronimo developers apparently realized that because so many of the interactions found in the app aren’t “standard” they can be difficult to discover or understand, so they included a section in the app’s sidebar (which also houses Gmail labels and settings) that contains a collection of “how-to” videos showing off the app’s gestures (which are far too numerous to list in this review).

Of course, an email client wouldn’t be complete without the ability to send messages, and Geronimo contains a fully featured composer. Some useful additions have been made to this screen, such as an auto-complete feature that lets you quickly add common email domains (@gmail.com, @hotmail.com, etc.) to the recipient address so you don’t have to type those in yourself every single time.

Users running newer versions of iOS will notice that the app also allows you to attach files from any registered file browser app on your device, including Google Drive, Dropbox, and iCloud Drive. In fact, Dropbox and Google Drive support are built directly into the app, so you don’t even have to install those respective file managers to gain access to those files—though having the apps installed will provide you with improved support, such as the option to pull files from other Google accounts.

Geronimo also includes an Apple Watch app with support for key features you won’t find on other software, including Apple’s own Mail app. Those features include the ability to search your messages from your wrist, and a composer that allows you to dictate and send a new message or a reply.

The watch app’s design is also nicer than what you’ll find in other similar applications, including Apple’s own default client. Rather than use dark cells on a dark background, which is quite bland, Geronimo takes an approach more similar to that of the iOS 6 Mail app by using a light inbox view against a contrasting background.

Incoming notifications can include image previews and contact photos, and you’ll find the same details within the message views.

The only issue that I ran into with the watch app was that it required me to do a Force Touch and tap the refresh button to sync it up with my phone’s inbox. Otherwise it would show emails that had previously been archived mixed in with some newer emails. It’s a small inconvenience, but perhaps in future versions this process could happen automatically.

Overall Geronimo does a pretty good job of introducing a unique way to interact with and manage your emails. While the iOS version’s workflow may be a bit too different to appeal to everyone, many users will find the date-separated inbox view a welcome change, and the watch app’s handy compose and search features along with the great message presentation make it worth checking out.

You can download Geronimo for free on the App Store today. It currently supports only one Gmail account at a time, but the developers plan to add support for other IMAP services in a future update.