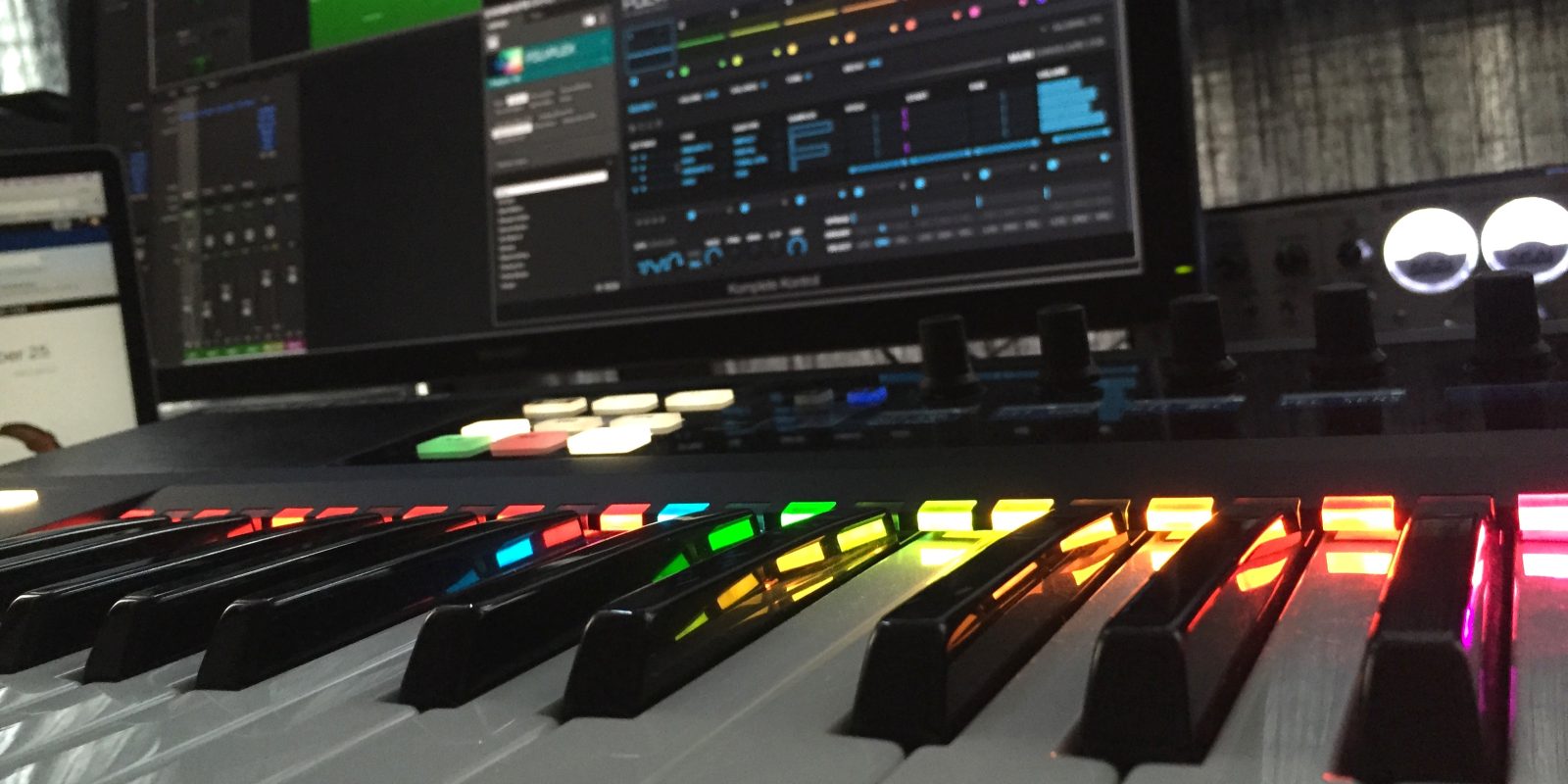 In this week’s episode of The Logic Pros, we thought it was time to look at the Komplete Kontrol S-series controller keyboards from the folks over at Native Instruments. While NI already offers a wealth of software powered controller gear for DJs, the stellar Maschine systems and more, the Kontrol keyboards bring deep hardware integration for the company’s best-in class software instruments/effects into a more familiar form factor then ever before.

We have spent some hands on time with the Kontrol S49 model alongside Komplete Ultimate 10, the latest version of the company’s flagship software bundle. It is time to see how deep and user friendly the hardware/software integration goes, how well it gets along with Logic Pro X, and whether or not it warrants the comparably steeper price tag… 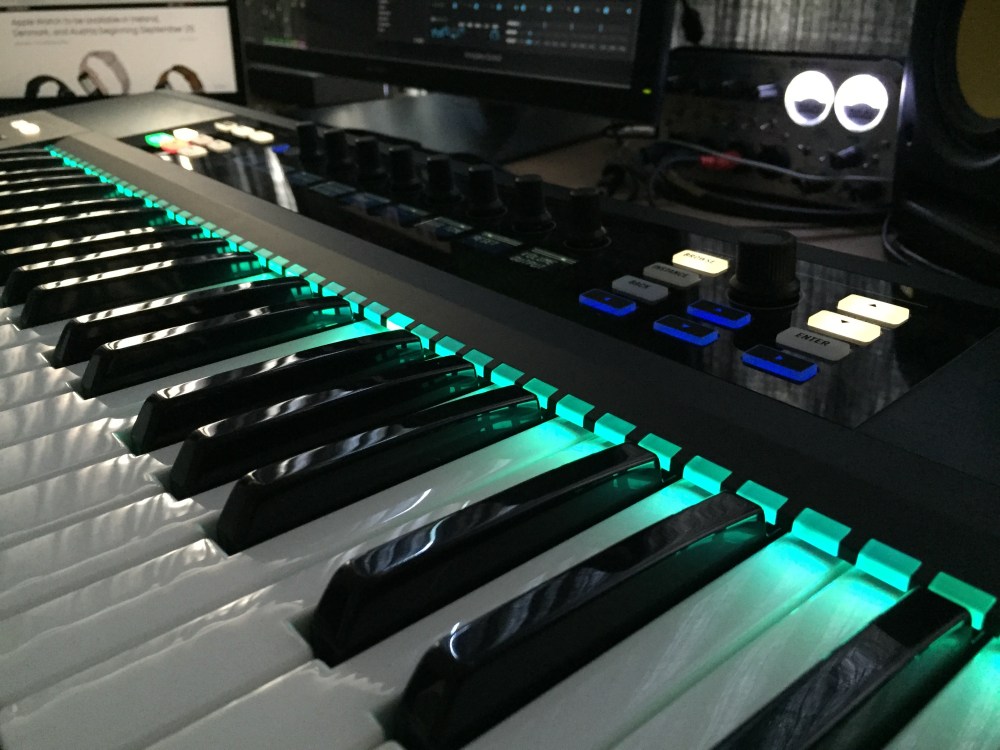 Native Instruments hardware has never been especially known for its build quality, but this keyboard is actually quite robust. Alongside an almost Apple-style packaging philosophy, the keyboard is actually much heavier and sturdier than I imagined it would be. It may not quite stack up to Akai’s tank-like MPK series in that regard, but the Kontrol S-series also has a lot more going for it elsewhere. You’ll immediately notice that every key has an accompanying LED light along the top which are used to convey information from various patches and keyboard settings to the user (more on this below). 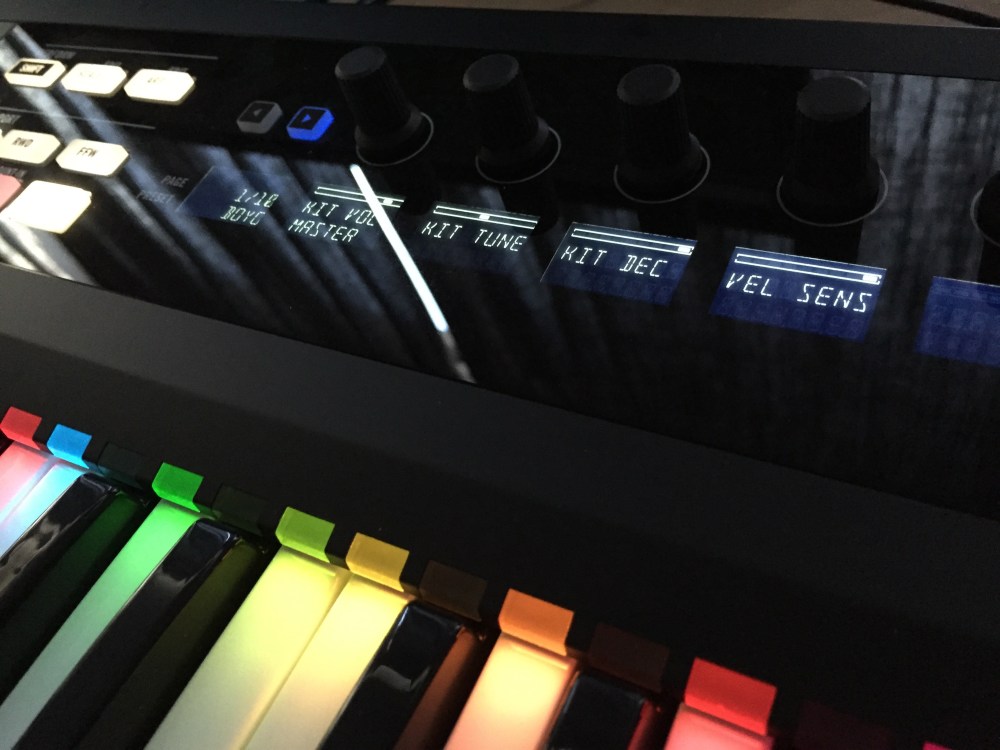 The sleek black shell is highlighted by the 8 macro control knobs and almost invisible looking displays set underneath. These controls are essentially the heart of the machine, allowing for pre-mapped control over various parameters across the multiple thousands of Native Instruments patches, instruments, effects and more.

On either side of the top panel, NI has provided us with some DAW transport controls to integrate with Logic, Ableton and others, and a basic browsing module that allows us to whip through our potentially vast library of sounds and effects without using a mouse. You’ll also find buttons to move up and down the octaves and a pair of touch-based sliders for pitch and modulation. All-in-all, it is a sturdy keyboard, and the partially-weighted Fatar keys themselves feel quite nice whether you are chopping out some rhythm parts, or articulating subtle piano lines. In fact, the keys happen to strike a fantastic balance between being very playable/responsive and not feeling like they could break under my fingers at any moment. 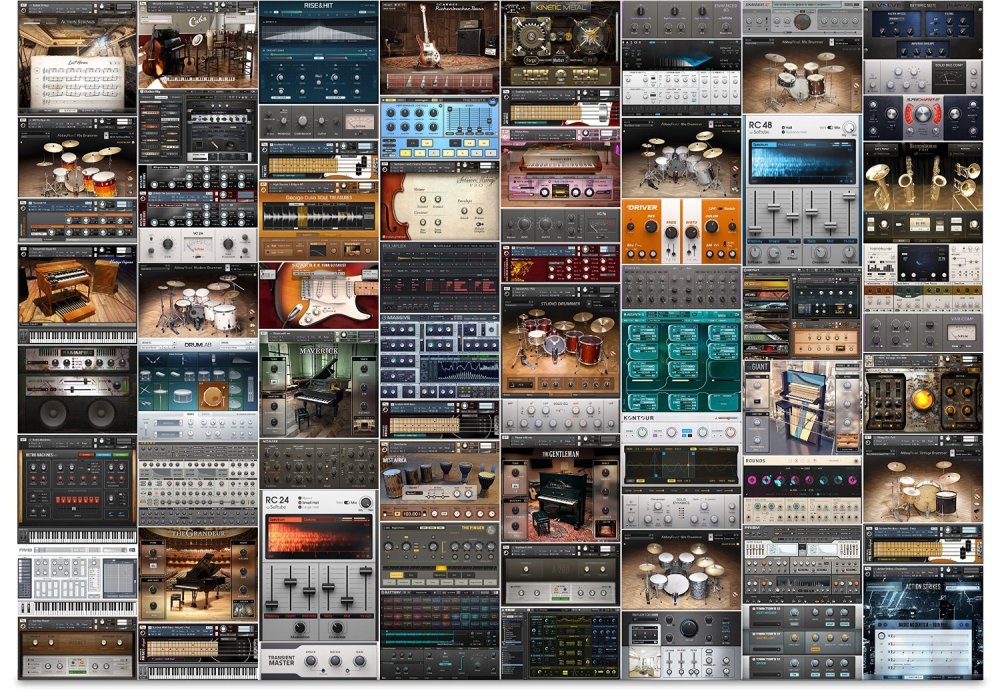 Native Instruments has one of the best and most diverse lineup of software instruments effects on the planet. So the idea of getting pre-mapped, first-party hardware controls over the lot, on a keyboard I can use in Logic Pro X, is certainly enticing. The Kontrol keyboards are designed to work with the software inside of the expensive Komplete Ultimate (versions 9 and 10) bundle, however, the company now offers a slimmed down Select version for free with purchase in order to get new users off the ground without (kompletely) breaking the bank. 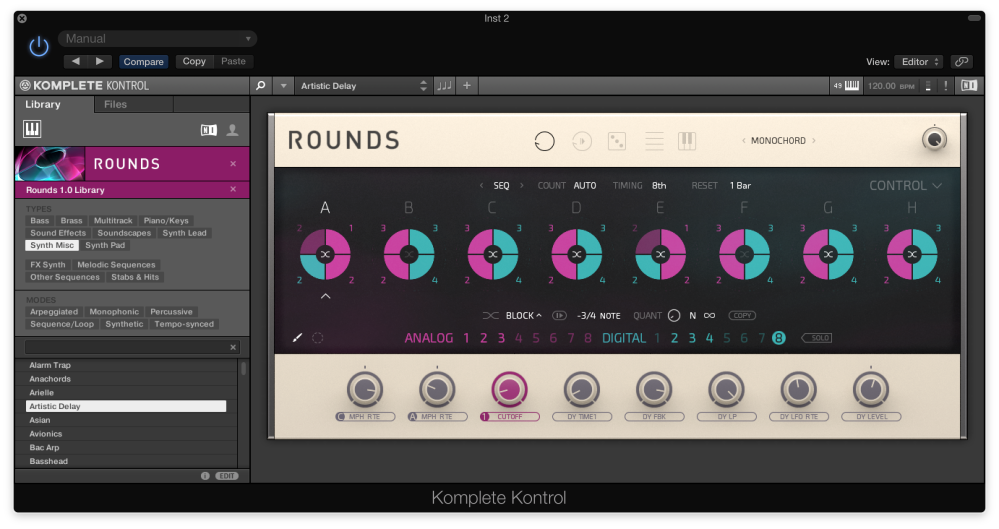 Essentially, NI has pre-mapped just about every instrument/preset and effect it offers to the Kontrol keyboard. The LED key indicator lights will display everything from keyswitches and mapped effects, to other keyboard-side effects like the built-in arpeggiator, chord effect and custom scale settings (more on these below). The 8 macro knobs come pre-loaded with parameters specific to each of your selected instruments, allowing for quick and easy access to some of the most pertinent sound-shaping controls. You aren’t limited to just eight either, the page left/right buttons can accommodate what seems like a countless number of mappable parameters for some patches. One really nice touch here: simply resting your finger on a one of the 8 macros will reveal the particular value that parameter is currently set at it. 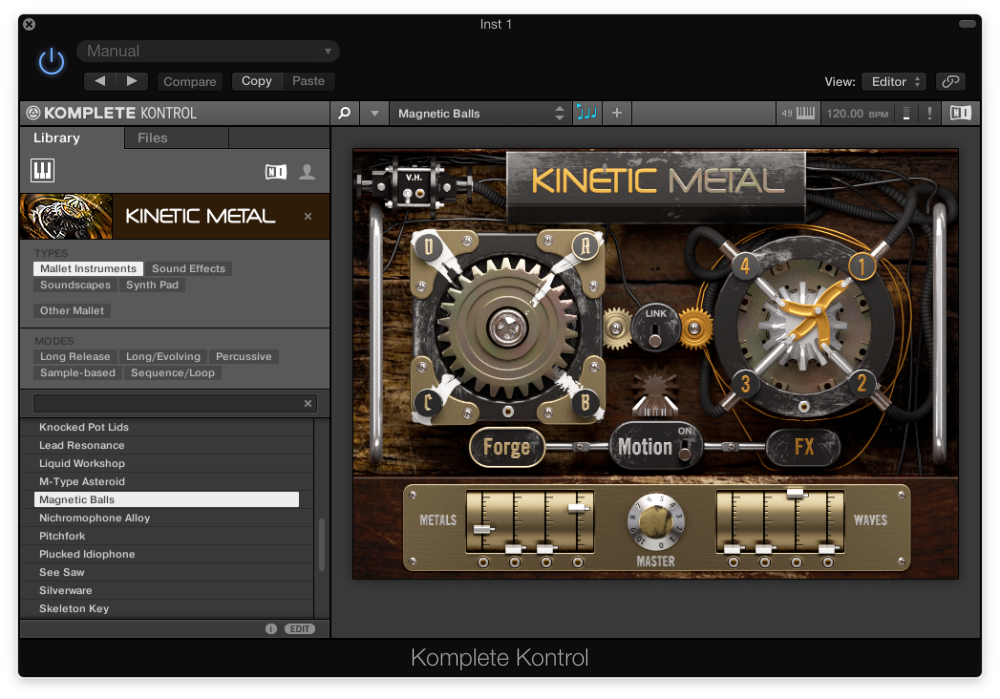 This is all made possible by the Komplete Control app. It can be used in standalone mode on your Mac or inside of Logic as a sort-of plug-in wrapper whereby all of your Komplete software instruments can be browsed and loaded. Komplete Kontrol is loaded up on an audio instrument track in Logic as usual, and then you can either mouse your way through it or use the hardware browser controls on the Kontrol keyboard. Using the data encoder knob and navigation keys we can easily flip through the library by instrument, genre, and instrument category. Komplete Kontrol immediately presents us with a stripped down version of the selected instrument, focusing on the main macro controls that are now automatically mapped to the keyboard. And advanced users can opt to go for the full-on view mode via a simple toggle switch in the menu. We can load as many instances of Komplete Kontrol as we wish inside of LPX. While at first, the idea of needing to use another app inside of Logic in order to leverage the pre-mapped parameters etc. didn’t sit right with me, there are a number of solid advantages here. It is all in one place: everything from your Kontakt library to the host of Reaktor instruments are accessible from within Komplete Kontrol, so it is quite handy in that regard. Plus, anyone familiar with either of the aforementioned products will be right at home with the UI. Using the hardware controls to flip through the thousands of available patches actually became quite addictive and quick after the first couple hours or so of using them, something specifically made possible by the Kontrol app.

The S-series keyboards also have a few other tricks up their sleeves as well. A built-in arpeggiator, scale controls and a powerful chord function really brought the keyboard to life. The arpeggiator is just what you would think, with all the usual controls including some pretty interesting preset pattern options. The Scale/Chord feature allows you to lock the keys of the keyboard to a particular scale or even have them playback rich chords with a single key strike. All of which are lit up by the key indicator LEDs or Light Guide. While none of the features are revolutionary, considering Logic’s built-in MIDI FX will get you there anyway, it was great to have the parameter controls for these settings laid out right in front of me on the hardware macro controls and a I found my self getting lost for hours at a time playing with various combinations of chord sets, arpeggiated motifs, pressed arp sequences and minimalist scale restrictions.

Note: While each of these features are handled by the software for the most part, we can have   individual settings for each on every instance of Komplete Kontrol. We can also go back and edit the parameters at any time, just like the instrument parameters themselves. 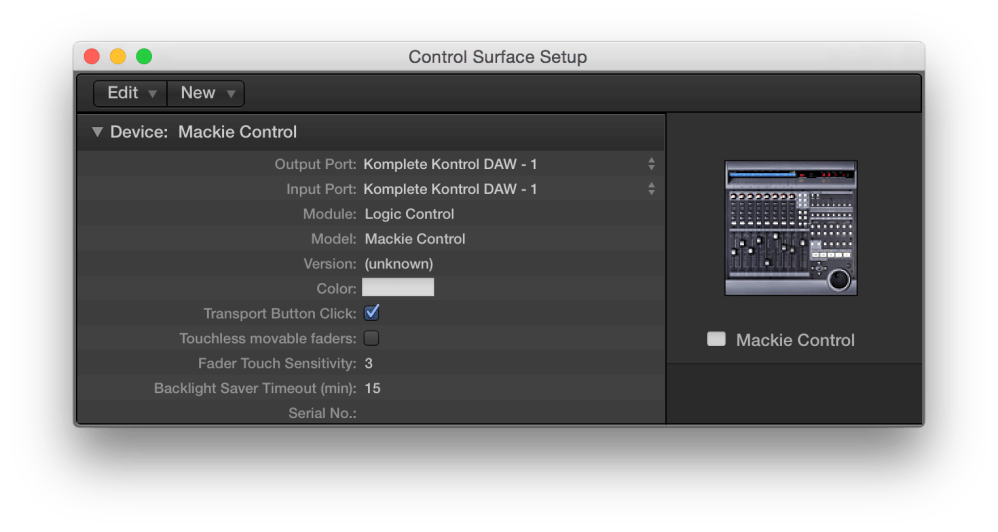 Onboard transport controls will talk to your DAWs with no trouble as a Control Surface. In Logic I had to manually setup a Mackie Control surface inside the Control Surface setup window, despite NI’s claims that it would all happen automatically upon loading up the first instance of Komplete Kontrol. However, there could have been an issue on my end, and once I quickly set it up, everything worked great. Another important thing to note, is that the keyboard will also work as a typical MIDI keyboard for any software instrument you have. Its controls can be mapped in any way you would like, so there is no need to have say a Kontrol S-series for your NI stuff and another controller for the rest. It works right out of the box like a typical MIDI keyboard.

The Kontrol S-series keyboard comes in 3 sizes: S25, S49 and S61 at $299, $499 and $699 respectively. These aren’t cheap controllers. However, I must say, as a long time Komplete Ultimate owner, I absolutely love the level of control we get over one of the best libraries of software in the game. Considering you can use the Kontrol just like any other keyboard anyway for the most part, it’s hard to not to recommend them for any Komplete user looking to upgrade their day-to-day workhorse controller.

Personally speaking, the lack of a typical pitch wheel will certainly take me a long while to get used to. I have also grown fond of having a few Logic wide controls (i.e. focused track’s volume/pan) mapped to my keyboard controller at all times, something this Native Instruments focused control panel doesn’t necessarily leave room for. But in the end, I tend to lean towards creativity and anything that makes that a smoother process. Kontrol allows me to navigate and audition the ever expanding Native Instruments library like never before with a typical keyboard controller. It works with Logic Pro X just the way I expected it to, and despite a few minor complaints, it is definitely going to be hard to go back to my regular controller.