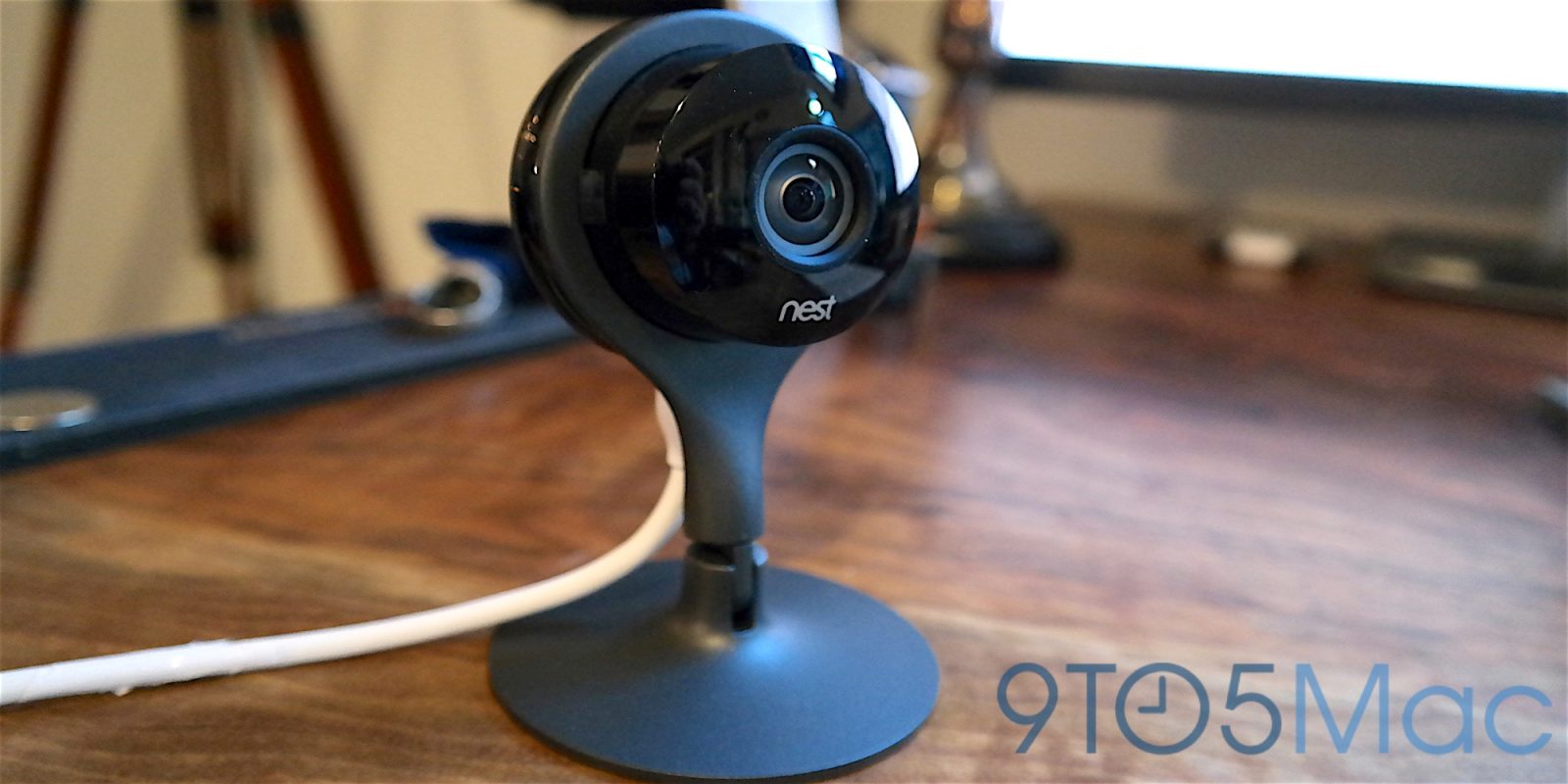 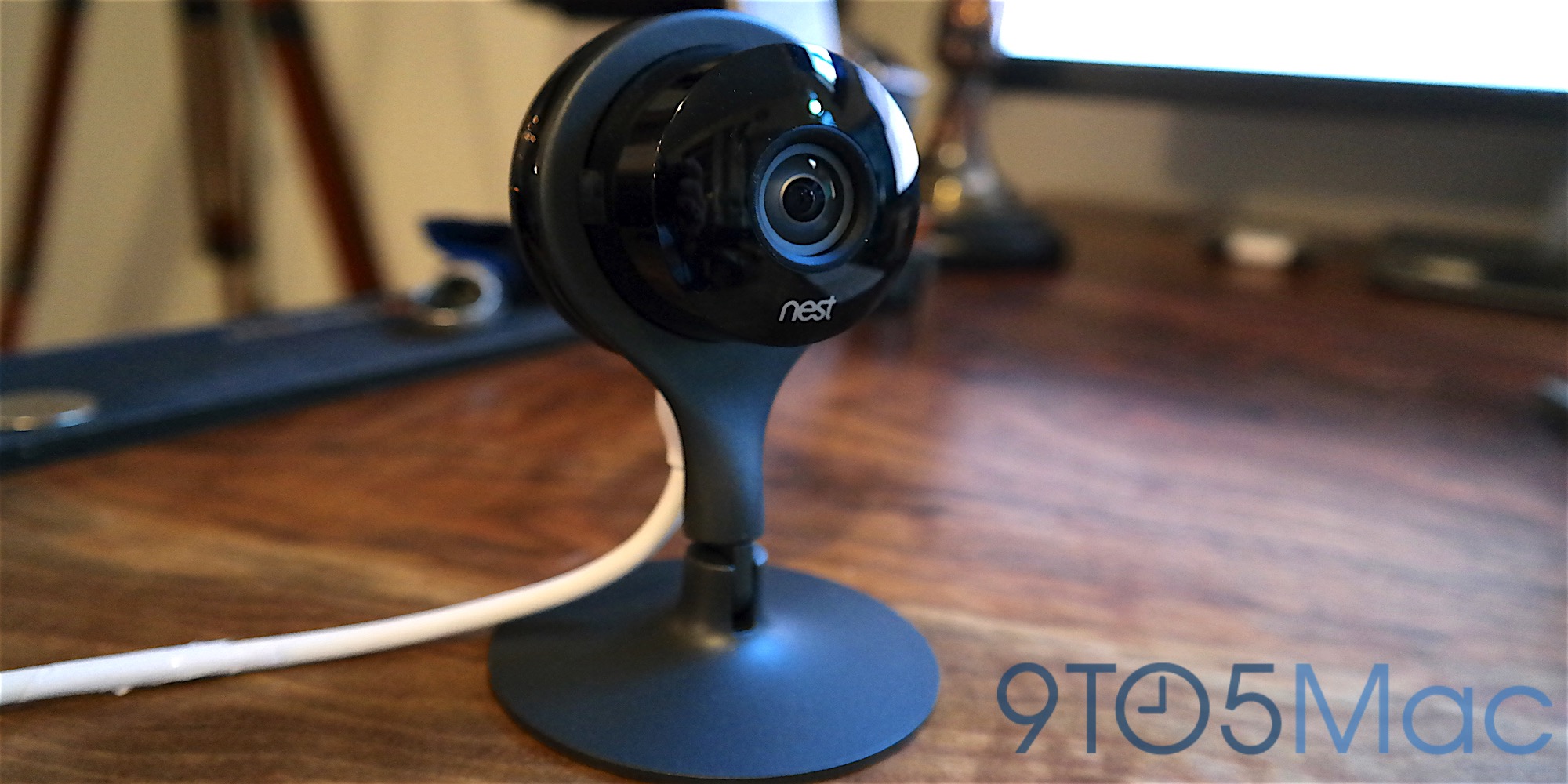 It’s certainly not the only connected-security camera, but following Google’s acquisition of popular security cam maker Dropcam last year, the company has just launched a second-generation product with new features. The new product was re-envisioned by Google’s Nest team— the people building smart home accessories like the Nest thermostat and fire alarm— and in the process dropped the Dropcam branding and gained a few notable enhancements.

But is the new Nest Cam worth an upgrade from your current Dropcam setup? And how does the product compare to the other connected home security-cam and all-in-one security devices on the market? We’ve been testing out Nest Cam since its release a few weeks back to find out. 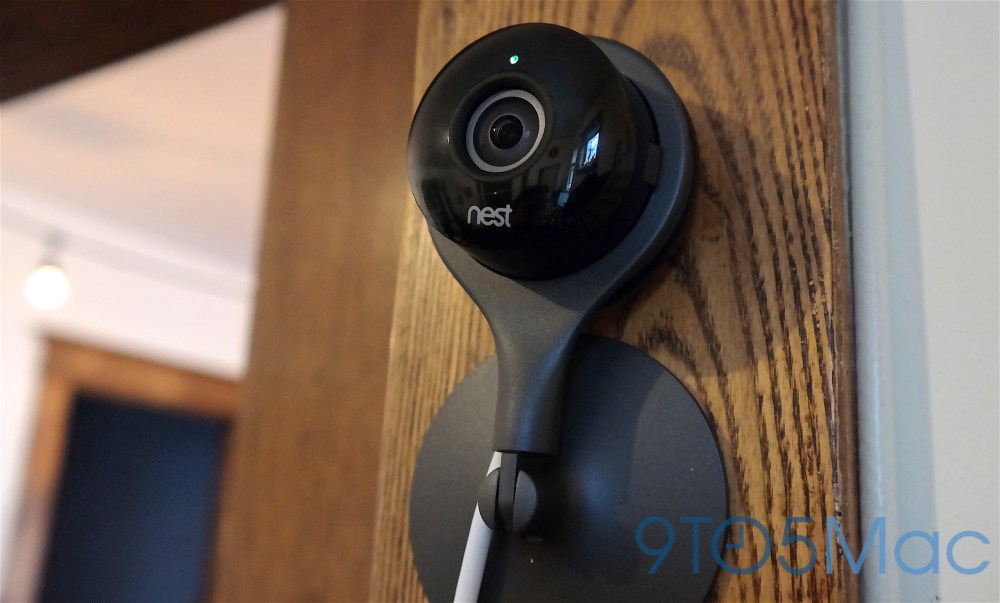 Setup is painless with the usual Wi-Fi accessory configuration process for iPhone users. Download the app, connect to your Wi-Fi network, and a few minutes later your cam is connected and ready to live stream and record. But that also means you can expect a few hiccups or necessary restarts if your network happens to not be playing nice at the moment. You have to plug in the camera, so you’ll want to have an outlet relatively close by (it comes with a 3 meter USB cable and wall adapter for power), but the design gives you a few options for positioning and mounting.

The base is magnetic and comes with a screw-on wall mount or can optionally sit upright on a desk or other flat service. It also unscrews from the base for moving on to a standard tripod mount of your own if desired. The arm of the camera is mounted on a swivel so you can position it upright or laying flat for the various mounting options, and the camera itself can be repositioned 360 degrees for example on the base, so it’s possible to adjust what the camera is capturing without having to remount the entire unit.

How does that compare to the competition? Some use batteries, which makes them portable, but for a home setup and the benefit of always on recording (more on that below), dealing with the power cable on Nest Cam is worth the trade-off. And when it comes to build quality, Nest Cam is as solid as it gets. It’s a tank, and that’s certainly a feature I appreciate in a security camera. 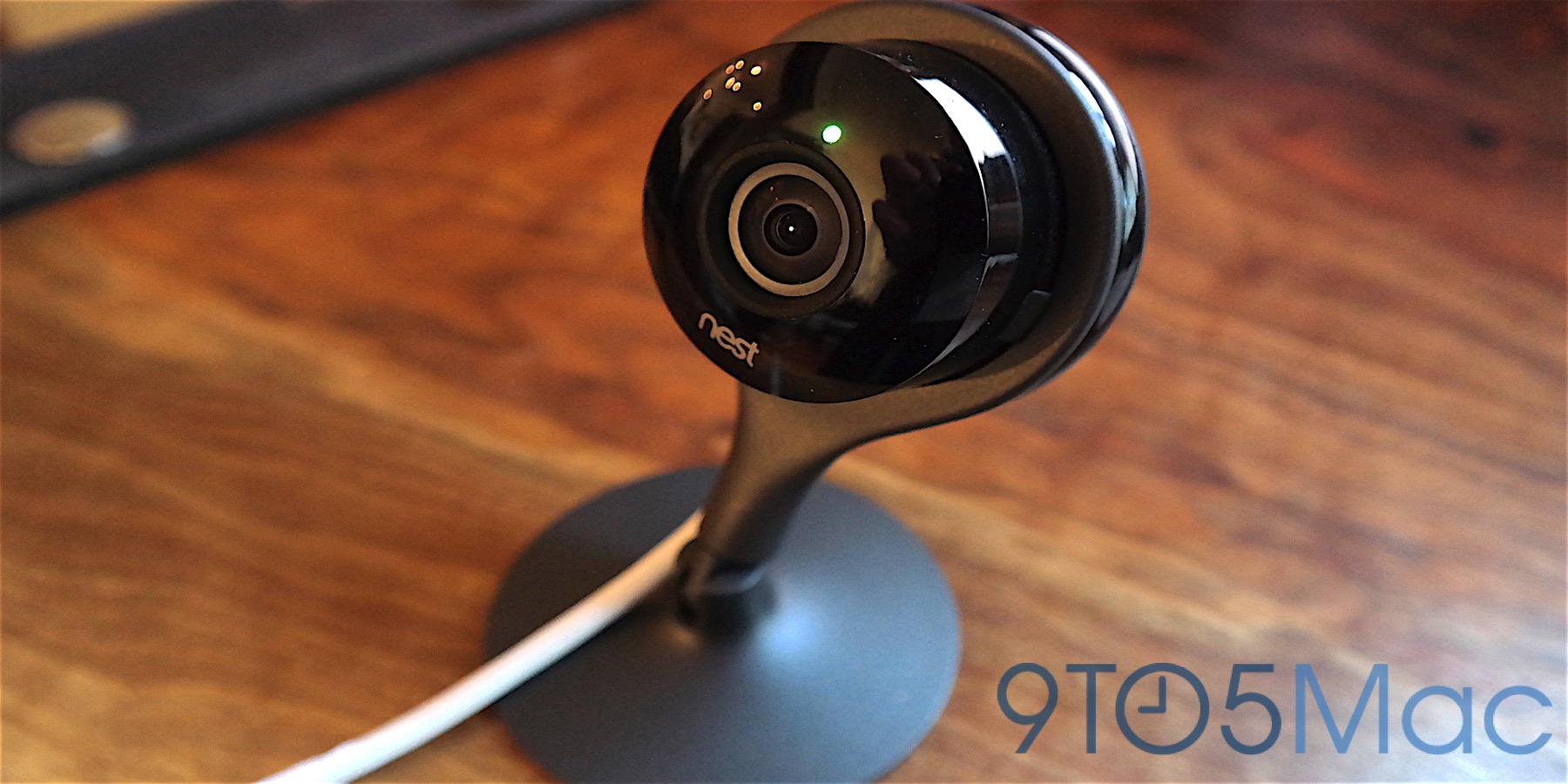 The features are quite basic when compared to some of the more all-in-one home/security products on the market, but you get everything you need for a solid security camera setup: a 1080p HD camera with a 130º wide­-angle view and zoom, a built-in speaker and mic for yelling at robbers or your pets or listening in, and access to video history with the ability to create clips, edit footage, and share videos with others. You can also setup rules for having the camera turn on and off based on your schedule.

The camera includes night vision LEDs that give you a great view in the dark compared to not such a great experience with cameras that instead just add a spotlight or don’t include night vision features at all. Some of the competitors on the market have opted to include other sensors for things like measuring air quality, for example, but the Nest Cam keeps quite bare-bones with just what you need for security camera purposes.

I quite enjoyed the software experience when testing out the Nest Cam, although there were a few annoyances and what I’d consider missing features…

On mobile you can’t record or share a clip and navigating the timeline for recorded footage is clunky at best, making it difficult to pinpoint a specific moment when browsing over a long period of recorded video.

It’s better with the web app on desktop where you can quickly and easily make clips for sharing purposes, but I still found the UI for navigating the timeline a bit cumbersome. Clips can be an hour in length, and you can store up to 3 hours of clips, otherwise they’ll get turned into time-lapse videos. I didn’t have any break-ins during my review unfortunately, so I shot some time-lapse videos instead: 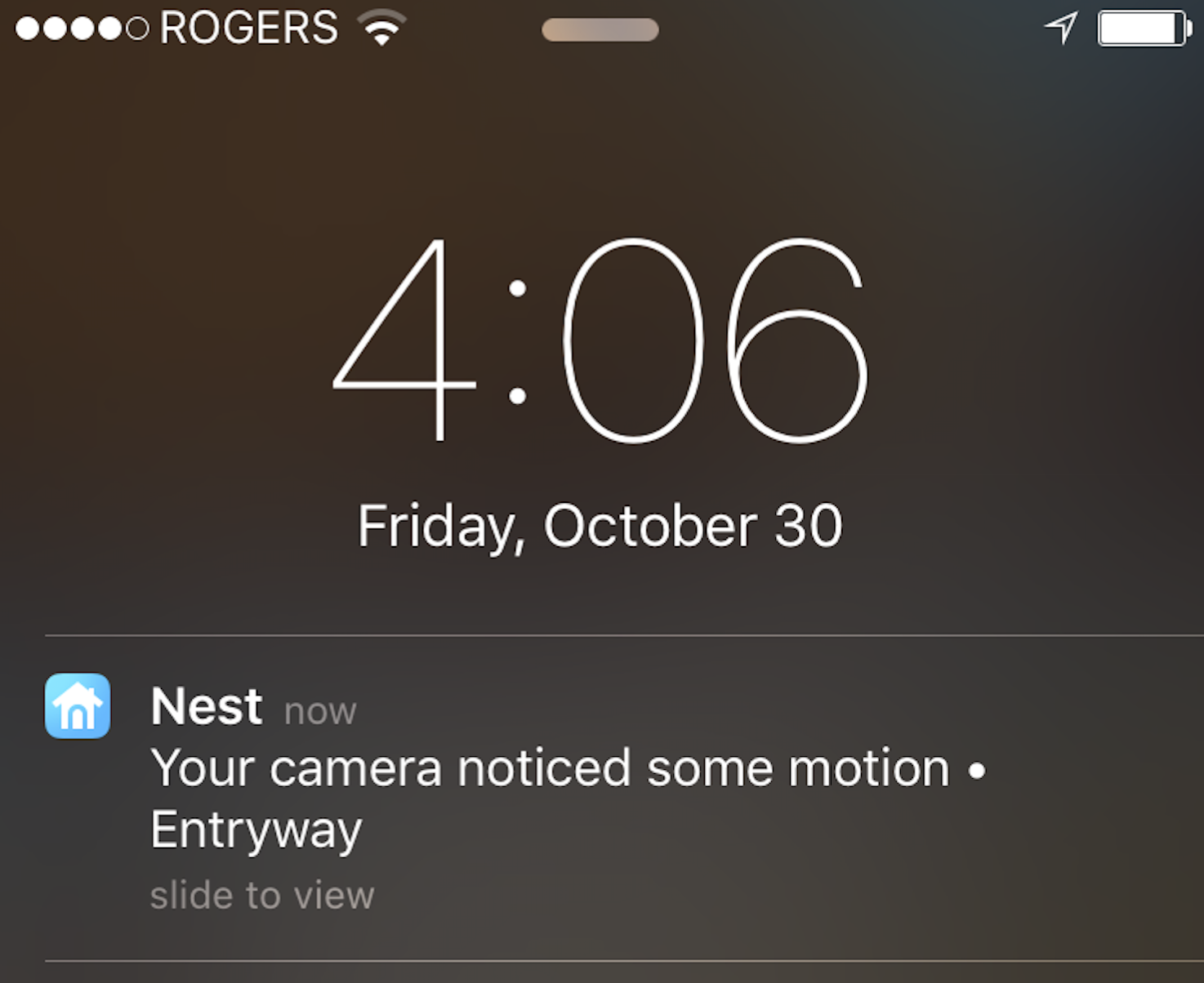 But in some cases you can benefit from the ability to set up activity zones to limit the motion detection to certain areas (only from the web app):

Streaming quality issues can depend a lot on your network, but I had no complaints in that regard. Nest makes recommendations for streaming requirements and bandwidth usage on its website.

You get a free 30-day free trial, but after that you’ll need a 10-day video history plan for $10/month or $100/year, or a 30-day video history plan for $30/month or $300/year. You’ll be able to view a live stream for free, but access to video history after your free trial requires a paid plan, and it’s required for other features as well like creating and sharing clips from your past video history. The pricing is quite competitive, although many competitors offer 24 hours for free or at least some amount of free access to video history. I’d imagine this would be a much easier buy for many people if they could somehow tap into their existing Google storage, or if Google bundled it into a paid Google storage plan.

HomeKit support is the big omission from this Apple user’s experience. While we’d expect the majority of other products to add support (Apple just added support for security systems with iOS 9), Google could be the one major, notable holdout if it decides to push its own home automation platform instead and keep it totally separate from Apple’s HomeKit framework. Nest would likely go along for the ride, although technically it’s now its own company under Alphabet and not necessarily tied to everything Google does.

It’s not that there is something key to the experience that HomeKit would add to Nest Cam on its own, but the decision to leave it out will definitely be a major consideration for consumers that are heavy Apple device users, and for those that plan on using HomeKit as the central location for controlling home automation products. Having one or more Nest products that exist completely outside of HomeKit doesn’t seem to make much sense in that scenario.

And beyond HomeKit, there is also a big opportunity to make Nest Cam more than just a security camera. Live streaming features is one example, something that has been a trend with apps like Periscope. I think the company that makes a home security camera with social features, making it fun to use outside of its security features, will have an easier time convincing people they need these products.

Some users have also pointed out lack of IFTTT support and some missing features compared to the old Dropcam app, like a geofence feature that triggered the camera on and off as you come and go.

And lastly, it would be nice if Google added a bit of onboard storage to cover us for the to-be-expected Google server outages and downtime.

I never really considered a security system for my apartment (we don’t lock our doors in Canada), but new Wi-Fi connected products like Nest Cam make the experience of owning and setting up cameras at home much more accessible than ever before. While there are a lot of alternatives to consider, any of Nest’s shortcomings wouldn’t make me pick a competitor for at least my own, admittedly modest purposes. For those that have already bought into the Nest and Google ecosystem and enjoy the experience, the choice will be easy. But for those hoping to build a HomeKit-connected household, lack of a promise from Nest to support the platform might be enough to hold off for now or opt for a competitor.