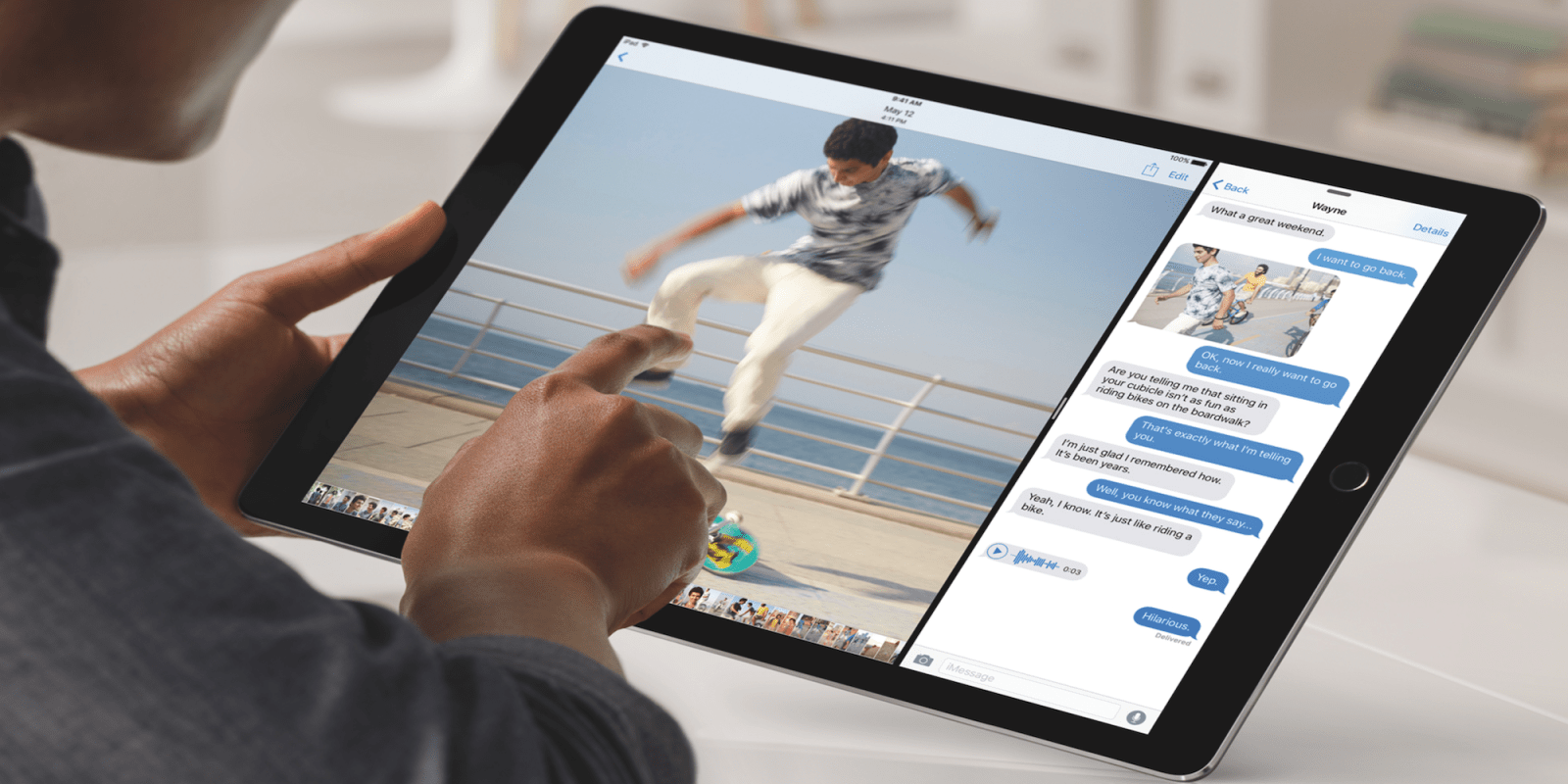 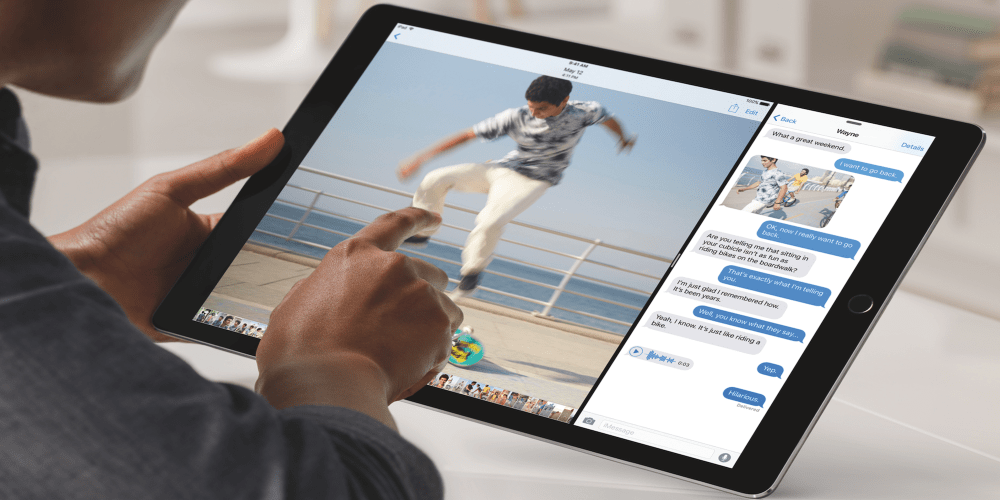 The iPad Pro went on sale at Apple this morning (after a few retailers jumped the gun)and now the reviews are out from a wide variety of tech publications. The iPad Pro features a large 12.9 inch Retina Display, a powerful A9X processor, quad-speaker layout and more. The Pro starts from $799 and maxes out at $1079 for the 128 GB WiFi + Cellular model. However, the most interesting features are arguably the accessories, like the Apple Pencil stylus and Smart Keyboard, which run an additional $99 and $169. The accessories are almost more important than the iPad hardware itself in making this a true PC replacement and — ultimately — a compelling purchase.

Walt Mossberg from The Verge says that the iPad Pro is a great consumption tool but the Smart Keyboard is lacking. He also mentions that despite the powerful internals, iOS continues to limit the true functionality of the device compared to a MacBook. He thinks the Pencil is good enough to appeal to real artists and the Pro form factor appeals to enterprise and business uses, but market for mainstream consumers is small.

You can get a lot more done with iPad apps than with the paltry selection of tablet / touch-first apps available for the Surface. But, because Apple hasn’t made a great keyboard, the iPad Pro isn’t a complete replacement for a great laptop like the MacBook Air — even for a tablet guy like me.

The iPad Pro will no doubt make a lot of Apple users happy, especially if they use it for graphics. But I won’t be buying one, and I don’t recommend that average users do so either.

Federico Viticci, from MacStories, who uses an iPad almost exclusively for his writing endorses the iPad Pro with high praise. I think the takeaway here is if you liked the iPad already as a work tool, then the iPad Pro just makes it even better. Viticci points out that multitasking on iPad Pro is almost like using two full-sized iPads in portrait, which is a big boon for productivity. However, the Slideover interface for selecting apps for the right-hand window is frustrating to use.

The device I’ve used every day for a year to get my work done for this site now seems tiny and limited, with small apps, less content shown on screen, and a constrained multitasking interface. I know that it’s only been a week, and I do believe that the Air 2 is a great device for lots of people, but I feel like all the work I’ve done on the iPad and iOS has led me to this point. I’m ready to take my iPad setup to the next level, and I think my workflow can benefit from improved hardware and a more capable version of iOS.

In the WIRED review, David Pierce puts strong focus onto the accessories. The Apple Pencil is smart because it has privileged access to iOS; pairing is as simple as placing it in the Lightning port. The Pencil accuracy is very good according to Pierce and claims it can be used for fine art, calligraphy and more — things that naive third-party iPad styli are just not good enough for.

However, Pierce is less impressed with the Smart Keyboard. He says its okay but third-parties will likely be able to replicate the same features and form factor without much difficulty. In fact, many have already done so with keyboard cases for existing iPads. Despite improvements in iOS 9, using a physical keyboard with an iPad remains a challenge.

A strange thing happens when you sit down at a 13-inch device with a keyboard, though: you expect it to work like a laptop. And the iPad Pro doesn’t. Its split-screen multitasking is handy, but only lets you do two things at once. The Smart Keyboard doesn’t support keyboard shortcuts in most apps, at least until developers add them. (Handy tip: press and hold the Command key in any app to see all available shortcuts.) You can Command-Tab to switch between apps, Command-Shift-H to go home, and Command-Space to open Spotlight. But why can’t you change the volume with the keyboard? Or turn the tablet off? Where’s the escape key? Why can’t you just start typing when you’re on the home screen to bring up the search, the way BlackBerry used to do it? Why isn’t there a search key that works in every app? Seriously, where is the escape key?

The iPad Pro A9X is definitely fast. CNET ran Geekbench scores that place it comparably against mid-range laptops. It’s just whether that power is put to good use on the iPad software side. It will be interesting to see this chip trickle down to smaller iPads in future, so the entire lineup can benefit from the speed.

But can the iPad Pro take on “real” laptops? Tests between PCs, Macs and tablets are necessarily more anecdotal, but using the Jetstream browser benchmark, a MacBook Pro and Surface Pro 4 came out on top. But when you consider that both of the computers were running full-on Intel Core i5 chips, the iPad Pro’s performance was quite good.

But speed, on something like an iPad, is relative. The iPad Air 2 still feels fast running iOS 9, even split-screen multitasking. I can get plenty of everyday work done on that, too. Speed depends on the specialized apps and tools that can take advantage of the iPad Pro’s power. There just aren’t enough optimized iPad Pro apps, yet, to determine what the difference could be.

ArsTechnica ran benchmarks and found the iPad Pro performing on par with some MacBooks:

We’re looking at MacBook Air-class CPU performance and MacBook Pro-class GPU performance, so the iPad Pro ought to be able to handle more multitasking features with aplomb as Apple sees fit to add them. Professional 3D apps like AutoCAD and the Complete Anatomy app Apple showed off in September all seem to run just fine, too.

Joanna Stern has a good summary of the mixed reaction to the iPad Pro, in how it’s a good laptop with a lot of edge-cases and many small limitations. The iPad Pro represents a weird dichotomy where for certain tasks it excels, like drawing, music creation or writing focused essays, but in other use cases — it remains primitive in power. Stern flags up the awkward iOS file sharing system and multitasking limitations (like being unable to put two Safari windows side-by-side) as outstanding big issues that hold back the Pro as a computer.

I brainstormed for my video using the Paper app, dragging in photos and videos, marking them up with handwritten notes. I edited a short video by cutting and moving around clips with my finger. I sliced off what looked like a real human leg in an app called Complete Anatomy.

That’s why answering “So… what is it?” is so hard. The Pro may seem wedged between iPads and MacBooks, but it will be your main computer in the future. As our phablets push smaller tablets into retirement, the big tablet and its accessories will do the same for our traditional computers. For now, however, it may be easiest to step back and see the Pro as a… really good, really big iPad.

Overall, the response to iPad Pro is the obvious one. It’s a bigger, more capable iPad … but it’s still an iPad with the accompanying iOS limitations. The iPad Pro is an even better consumption device thanks to the beautiful screen and impressive speakers. As a creation device, it can be used for real work for some people but it’s not a universally-useful product like a laptop is. Additions to the app ecosystem will help improve this. For accessories, the Apple Pencil seems like a big hit and should be very appealing for creative artists who want to doodle around on a ‘professional’ drawing tablet. However, the Smart Keyboard is somewhat lacking and doesn’t really justify its $169 price tag.

Let us know in the comments if you are planning on picking up an iPad Pro and what your intended use cases are … The first iPad Pro deliveries are due this Friday, although many stores have same day pickup options.